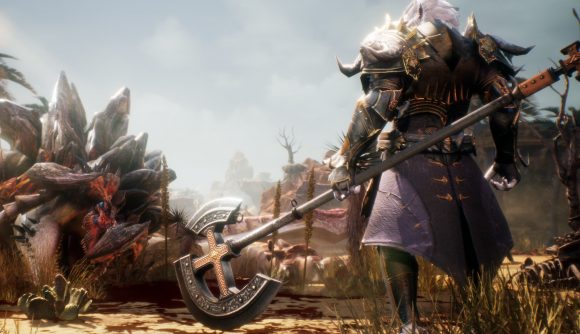 Bless Mobile is the latest flashy PC MMORPG making the move to a mobile device near you, delivering top-notch visuals and an expansive fantasy world to explore. The news today is that creator JoyCity has announced a pre-registration campaign ahead of the game’s upcoming launch on iOS and Android that offers around $50 of in-game rewards to those who get in early.

Initial impressions are that it’s kinda like Monster Hunter meets Black Desert, with plenty of hulking beasts to take down, dungeons to delve into, and loot to horde. You start your adventure by selecting from four races and five character classes, including your standard soldiers, tanks, mages, and more.

Much like Black Desert Mobile before it, Bless Mobile is an Unreal Engine 4 title that aims to serve up a console-quality presentation and a full, meaty MMORPG adventure. Despite the genre’s inherent complexity – both in controls and questing – Bless Mobile is said to play like a dream on touchscreens and provide a genuinely mobile-friendly experience.

Its combat steers clear of the familiar point-and-click battles featured in many MMOs for a more “dynamic, direction-based” system that pays homage to the hack ‘n’ slash genre while adding in explosive specials.

Bless Mobile looks set to launch with a treasure trove of content, such as solo and multiplayer dungeons, PvP, and even a range of minigames, like fishing and mining.

If you have the time to spare on another MMORPG of epic proportions, you’ll find Bless Mobile up for pre-registration right now over on the App Store and Google Play. If this one doesn’t quite tickle your fancy, take a quick look at our list of the best mobile RPGs on iOS and Android.