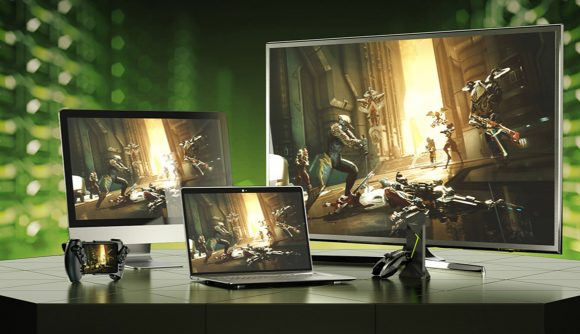 Back in August, Apple removed Fortnite from the App Store due to Epic Games’ attempt at bypassing the in-app payment system. As a result, the highly successful battle royale game has been unavailable on iPhones and iPads for the last few months, but no longer. Nvidia’s cloud gaming service, GeForce Now has been updated to support streaming via Safari, Apple’s own web browser.

GeForce Now differentiates itself from other streaming services like Microsoft’s xCloud and Amazon Luna by having the players use their own games. By using your Steam library, you can gain access to your cloud saves and play most of your library no matter where you are. Utilising GeForce Now’s free basic tier, you can play Fortnite for up to one hour at a time on your iPhone or iPad.

Apple has been notoriously difficult when it comes to streaming games from cloud services. Microsoft wanted to offer their xCloud service on iOS devices, but Apple wanted Microsoft to submit each game as a separate app instead of having just one xCloud app.

Amazon Luna managed to sidestep this entire argument by creating a web app that can be accessed through any web browser. This method cannot be stopped by Apple, making it the go-to solution for any streaming services out there.

Let nothing slow you down. Bring GeForce PC gaming power to any device. 👊

Head on over to our best iOS and Android controller list to find out exactly which pad suits you best. If GeForce Now just isn’t cutting it for you, don’t worry. We’ve got a list of the best games like Fortnite on iOS that will have you competing against other players on a massive battlefield.