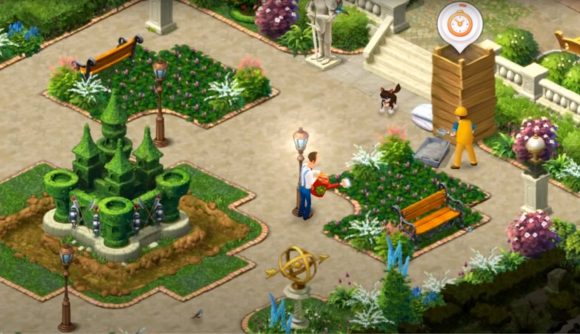 Match-three puzzler Gardenscapes has hit a staggering $3 billion in lifetime earnings via play spending, coinciding with its fifth anniversary. Chances are you’ve heard of Playrix’s title, even if you’re yet to play it – Gardenscapes is one of the most influential match-three games out there, with its inclusion of narrative, and decoration mechanics.

According to Sensor Tower, between January 2021 and June 2021, the game hit $405 million in player spending, making it the second most lucrative puzzle and decorate title. It comes second only to its successor, Homescapes, which boasts $469.2 million for the same period. It even sits above fellow Playrix puzzle title Fishdom,  which raked in revenues of $222 million for the first half of 2021.

To date, 2020 is Gardenscapes best year in terms of revenue, as it hit $959 million in player spending – nearly a third of its lifetime earnings. Moreover, the impressive figure represents a growth rate of 78% year-on-year. Overall, Playrix’s title was the ninth top-earning game worldwide last year, beating Sony’s RPG Fate/Grand Order.

As for specific regions, the United States is Gardenscapes most lucrative market, being responsible for $1.1 billion of total player spending – or rather, 37% of all earnings. Meanwhile, Japan and Germany sit in second and third place, respectively.

Since you’re here, why not check out our picks for the best mobile puzzle games – there are some real noodle scratchers out there. Alternatively, you could look at our choices for the best Android games and the best iOS games for a wider variety.