Genshin Impact‘s Ayato has captured the eyes and hearts of many fans of Hoyoverse’s hit RPG since he was first revealed. With his playful yet dutiful personality, impeccable sense of style, and unique, fast-paced style of DPS gameplay, the current head of the Kamisato Clan in Inazuma and the Yashiro commissioner is truly a unique and valuable asset to many teams.

With our Ayato Genshin Impact build guide, we take a look at his current banner, as well as diving into the best Ayato Kamisato builds for both DPS and sub-DPS or burst support roles. We aim to help you work out whether he’s a worthwhile addition to your roster, how to make best use of his unique skillset, and which teams this handsome boba boy synergises well with.

As of March 30, Ayato is now available as a part of the new Genshin Impact 2.6 update. 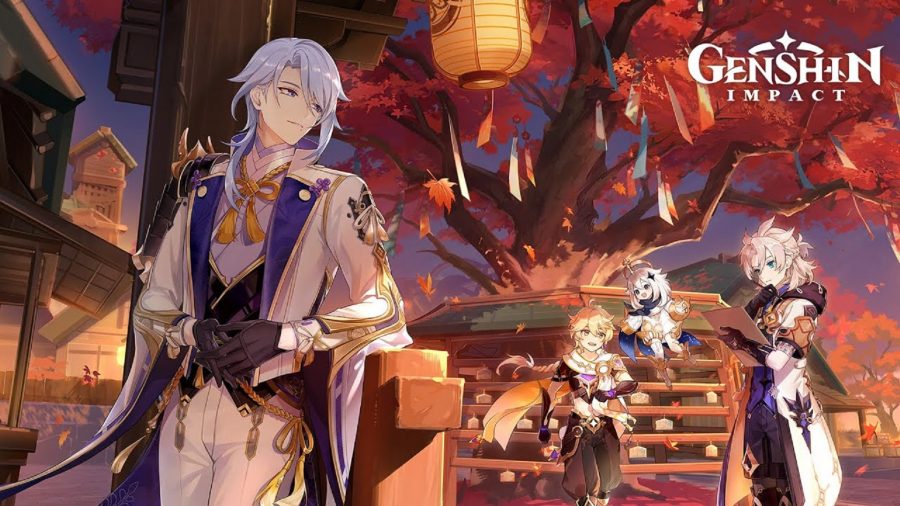 What can we expect from Ayato Genshin Impact’s banner?

Ayato is a sword-wielding hydro user with some interesting utility. He can take the field as either a DPS or a sub-DPS, though, as he’s still very new, we’ve not had the chance to fully get to grips with the best build or skill rotations yet. The following builds are based on what we currently know about him, and we’ll update them when we’ve had the chance to test him out more thoroughly.

Ayato has the potential to deal a lot of damage if you capitalise on his elemental skill, Kamisato Art: Kyouka. This skill leaves behind a watery illusion, which explodes and deals AoE hydro damage. It also increases the speed of his normal attacks, and converts them into AoE hydro damage. Additionally, every time his Shunsuiken deals damage to an enemy, he gains a stack of Namisen, which increases his damage based on his max HP.

In short, in order to make the most of Ayato as a main DPS, you’ll want to ensure you have his elemental skill active as often as possible. We also recomend you build him with as much normal attack damage as possible, and make sure his health is at a decent level to help him live up to his high DPS potential.

Keeping the above in mind, you’ve got two main choices for artifact sets. If you want to use him as a hydro-focused DPS (for example, in an electro-charged, permafreeze, or vaporize team comp) it’s best to go with Heart of Depth. This set is considered the most consistent choice for him, as it provides a boost to Ayato’s hydro damage, and increases his normal and charged attack damage after using an elemental skill, which compliments his skill and attack rotation.

The second option is the new set, Echoes of an Offering. This one has a very unique skill that we’ve not been able to fully test out yet. However, despite it seemingly being designed to compliment Ayato’s kit due to it suiting characters who capitalise on normal attacks, we’ve found it isn’t as big a game changer as we’d hoped, offering less stable DPS than Heart of Depth with only occasional substantial procs.

Echoes of an Offering is still a good choice, but we recommend only farming it if you have Genshin Impact’s Xiao and are hoping to get the new Vermillion Hereafter set for him. Then, if you happen to pull a set of Echoes of an Offering with better sub-stats than your Heart of Depth pieces, you should use that on Ayato.

Alternatively, you can go for Gladiator’s Finale, which is a pretty easy set to obtain, and focuses solely on increased Ayato’s damage. Nothing wrong with a bit of extra bang for your buck.

When building DPS Ayato, you should aim to use artifacts with the following stats and sub-stats if possible.

Naturally, the best weapon for DPS Ayato at the moment is Haran Geppaku Futsu, a new sword that was tailor-made for him. It’s available on the weapon event banner that is currently running alongside him.

Alternatively, Mistsplitter Reforged, Summit Shaper, and Primordial Jade Cutter are great choices. But if you’re looking for the best four-star weapon for Ayatao, Black Sword from the battle pass is a brilliant option. And, if you have none of the above, you can also use the three-star Harbinger of Dawn as a place holder until you’ve got something better.

Lion’s Roar is also an interesting choice for Ayato, however, due to its skill only triggering when used on enemies affected by pyro or hydro, you should only give him this weapon if you’re using him in an electro-charged comp to get the most out of it. 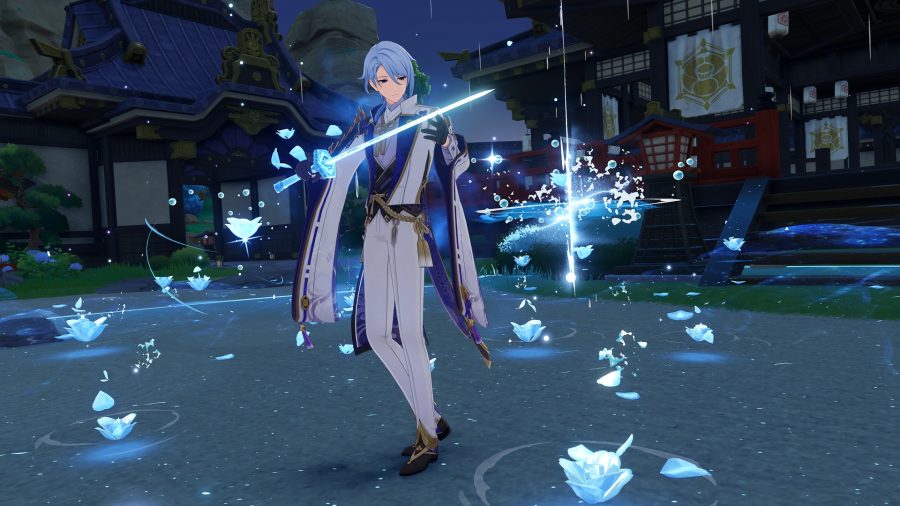 If you want to use Ayato as a sub-DPS or burst support, you need to maximise the use of his burst. This build has great potential for supporting your team with constant hydro application and attack speed buffs.

Of course, as with the DPS build, we’re still getting used to this handsome chap, so these recommendations may change as we learn more about his utility and skillset and how he works in the field.

For sub-DPS or burst support Ayato, you’ve got a few artifact options. First, you can go with a full set of Emblem of Severed Fate to increase his energy recharge, allowing him to use his burst more frequently.

You can also choose to give him a full set of Noblesse Oblige if you don’t have someone on your team already using that set, as its four-piece, team-wide buff doesn’t stack. Alternatively, you can go with two pieces of Heart of Depth and two pieces of Noblesse Oblige to boost both his hydro and burst damage, in turn helping his buff and allowing him to make a big impact whenever he’s in the field.

When building Ayato for a sub-DPS or burst support role, these are the artifact stats and sub-stats you should aim for.

Luckily, you’ve got quite a few options when it comes to the best weapon for a sub-dps or burst support Ayato, and which one you should pick depends on how you want to use him.

As with DPS Ayato, Mistsplitter Reforged is a good choice for its energy recharge and boost to his burst damage. Similarly, Skyward Blade, Freedom-Sworn, and Primordial Jade Cutter are great for their buffs. The Freedom-Sworn’s buff even applies to the whole team, making him an even more useful support.

However, all of the above are five-star weapons, so may be tricky to get. But you still have some great options if you’re looking for the best four-star weapon for Ayato in a sub-DPS role. Amenoma Kageuchi, Festering Desire, and Iron Sting are all strong options, two of which you can forge via the Blacksmith, so you’re not without options if you’re F2P!

What are Ayato Genshin Impact’s abiltities?

Here are Ayato Genshin Impact’s abilities (or talents) and what they do. To level them up, you need handguards from Nobushi in Inazuma, and teachings of elegance, guide to elegance, and philosophies of elegance from the Violet Court domain on Narakumi Island, Inazuma. You also need Mudra of the Malefic General to upgrade his abilities to the highest level, which are drops from the Genshin Impact Raiden weekly boss under the Grand Narukami Shrine.

Regardless of what build you go with, we recommend you prioritise leveling Kamisato Art: Kyouka Art first. 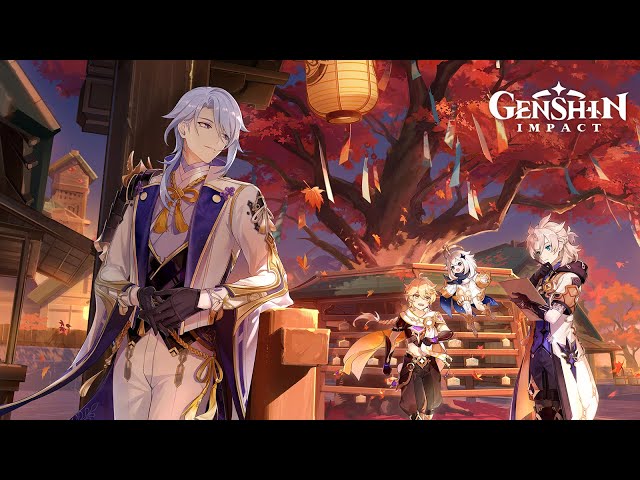 What are Ayato Genshin Impact’s constellations?

Here are all of Ayato’s constellations. Of course, in order to gain a constellation, you’ll have to be lucky enough to pull this handsome chap multiple times. Luckily, he’s pretty powerful at C0, but snagging any of these is always a bonus.

What does it cost to ascend Genshin Impact’s Ayato?

These are all the materials you need to ascend Ayato. You can gather sakura blooms by using electro on sakura clouds around Inazuma, and handguards drop from Nobushi enemies.

What are the best Ayato Genshin Impact team comps?

Ayato is a flexible unit who can slot into pretty much any team that needs reliable hydro application. Therefore, he can be a strong member of many vape, taser, and permafreeze teams.

Here are some examples of team comps for Ayato.

This team offers strong electro-charged reactions, with Ayato acting as the trigger. Throw down Fischl’s Oz as a turret to deal consistent electro damage and generate energy, use Beidou’s shield, then switch to Ayato to unleash multiple hydro-infused attacks with his skill and burst. Bennett is a great support for Ayato due to both his healing and attack buff. Additionally, the wide range of Ayato’s normal attacks after using his elemental skill allows him to stand inside Bennett’s burst field and still hit enemies outside of the area.

Yoimiya and Bennett not only trigger pyro resonance, but, when combined with Ayato, they have the potential to dish out plenty of vaporize reactions. Additionally, Yoimiya can act as the main damage dealer during Ayato’s downtime, as he’s recharging his burst and waiting for his skill to come off cooldown. Bennett and Yun Jin both offer some useful buffs, allowing you to maximise Ayato’s damage output. Bennett can also heal your team with his elemental burst.

In this comp, you can use Venti to round up the enemies, then combine Ganyu and Ayato’s bursts to apply persistent cryo and hydro damage, freezing them in place. Diona offers a shield and heals, and also triggers cryo resonance with Ganyu, allowing you to deal more damage to frozen enemies, which works wonders when unleashing Ayato’s elemental skill.

And that’s everything we have on Genshin Impact’s Ayato. Make sure you check out our picks for the best mobile RPGs if you’re after other games like Genshin Impact.