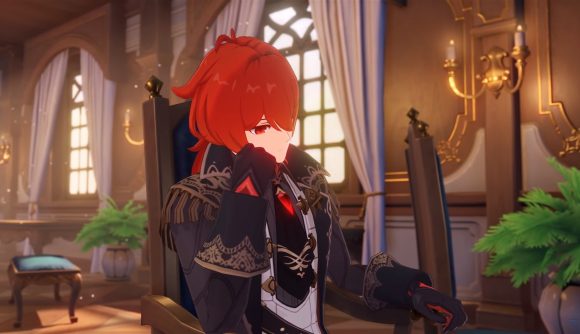 Over the weekend, KFC China started a Genshin Impact collaboration event. Exclusive pins featuring the adorable Noelle and the handsome Diluc, in-game items, and a special themed meal were promised to customers who shout “meet in another world, enjoy delicious food!” at the restaurant’s cashiers.

Unfortunately, this didn’t run as smoothly as planned. KFC restaurants in Shanghai and Hangzhou were forced to stop the promotion as a huge number of Genshin Impact fans descended upon the restaurants, breaking COVID-19 regulations in the process (cheers, Kotaku).

For those of you outside of China hoping to get your hands on the in-game items, Mihoyo recently revealed that you’ll be able to grab the stylized wind glider and other items coming to the Celestia and Irminsul servers before July 2021. It’s unclear what tasks you’ll need to complete to obtain these items, but we’ll make sure you’re kept up to date on our Genshin Impact codes page.

These people were waiting all night for the KFC x Genshin Impact collab in China. This location is Nanjing.

Fans can get a special Genshin Impact branded meal, in game content and an exclusive KFC branded pin / badge.

I've never seen anything like this before for KFC, lol pic.twitter.com/a5DtSYpodJ

If you want to know more about the characters featured in the KFC collaboration event, take a look at our Genshin Impact Diluc and Genshin Impact Noelle guides. And if you’re looking forward to the game’s next major content drop, check out everything we know so far about Genshin Impact update 1.4.