In order to whet everyone’s appetite for the upcoming sequel to The Legend of Zelda: Breath of the Wild, Omega Force has once again been asked by Nintendo to bring its Musou-style hack-and-slash combat to the series. This time, rather than being a celebration of every game in one package, Hyrule Warriors: Age of Calamity aims to be a worthy Breath of the Wild companion piece, and it largely succeeds.

In this prequel to Breath of the Wild, a small guardian travels back 100 years into the past, as monsters attack Hyrule castle. During the battle, Link stumbles across Impa as a horde of Bokoblins chase after her. Slinging a device towards Link, the miniature guardian awakens, causing a giant tower to sprout violently out of the ground. After examining the little guardian, Princess Zelda sets out with Link and Impa to find the four champions capable of wielding the Divine Beasts against the forces of the slumbering Calamity Ganon.

As far as a prequel goes, Hyrule Warriors: Age of Calamity does a relatively good job of laying the groundwork, and I really like how it gives more time to each champion’s backstory. It’s perhaps a little too melodramatic at times, particularly when it comes to Zelda’s insecurities about a third of the way in, but it’s otherwise a relatively epic tale.

The overall presentation is rather lovely. Instead of a heavy emphasis on power chords, Age of Calamity’s soundtrack is more orchestral and grand in scope. That said, I did find myself sorely missing the guitars of almost every other Omega Force Musou game after several dozen hours, but I still appreciate the different direction. But what threw me out for a loop with the English voice acting was how it was edited into the scenes. There are times when there are long drawn out pauses that make conversations feel unnatural. 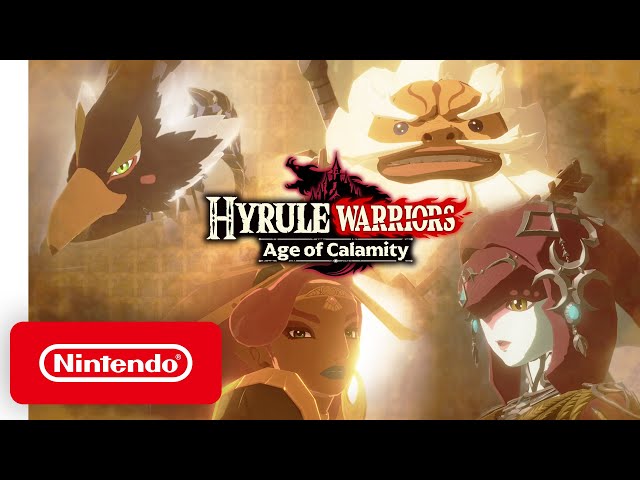 Age of Calamity is far more successful, however, in emulating Breath of the Wild in terms of art style and gameplay. Its slightly washed out looking characters give a very clean and vibrant feel to the world. Each mission and challenge is also caked with monsters, borrowing the key designs from Nintendo, and using them in an appealing way. It probably wouldn’t have worked to have the UI be as minimalistic as it was in Breath of the Wild, but Age of Calamity is clean, showing exactly what it needs to.

Every mission’s structure is largely what you expect from a Musou game: head to a point, capture the outposts, defeat a boss monster, rinse and repeat. Occasionally, enemies will appear from out of the aether which can be a little frustrating, but it’s a formula that has worked well for decades, and there’s nothing quite like hacking away at hordes of enemies despite being thoroughly outnumbered.

Related: Meet the roster in our Hyrule Warriors: Age of Calamity characters guide

Where Age of Calamity excels is in the combat itself, or at least it does depending on your character of choice. By combining light and heavy attacks together, you can perform unique combos to plough through smaller foes. It’s not too dissimilar to Hyrule Warriors in that you can switch between characters at the touch of a button. There are lots more enemies whose poise you have to break before you can take them down, but using magic and the Sheikah Slate abilities to find weak points is a good nod to Breath of the Wild.

Bosses are a particular highlight, requiring tactics and skills more commonly found in 3D Zelda games than Dynasty Warriors. They’re a welcome change of pace after making thousand-strong hordes of monsters burst into puffs of smoke. 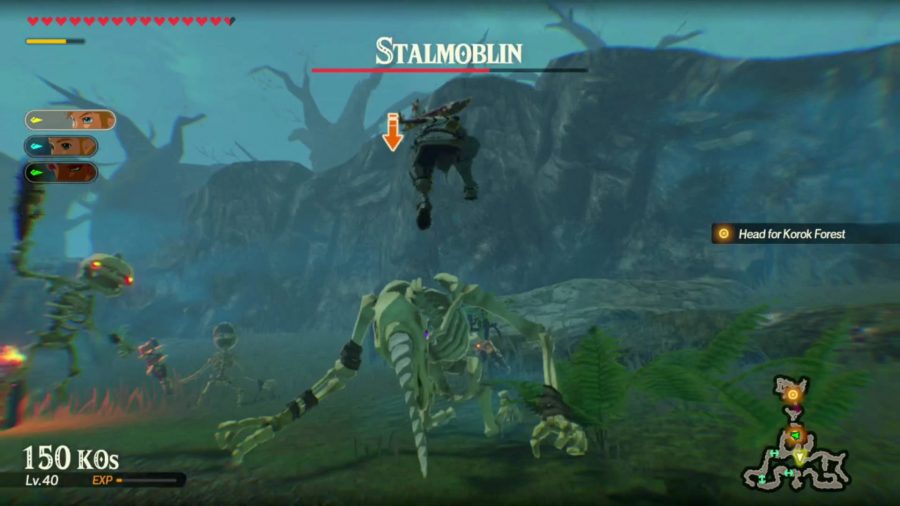 Some characters have multiple playstyles, meaning that you aren’t locked to using the same attacks over and over. The most immediate example of this in action is Link, as he can bring one of three different weapon types to battle, each with their own combo strings. For the most part, I got a good handle on how the roster’s different attack styles worked, but there were some cases where I struggled to bring out a character’s full potential.

What is a Musou game?

Musou games are spectacle fighters that take place on giant battlefields. Each one is littered with outposts that you need to capture with your character, all while fighting off hundreds, if not thousands of enemies. Examples of similar games include Omega Force's Dynasty Warriors series, adaptations of anime games like Fist of the North Star or One Piece, and spin-off titles developed for other game series' including The Legend of Zelda, Fire Emblem, and Dragon Quest.

For every Link, Urbosa, and Mipha whose combos were simpler to execute for the most damage, there was an Impa, Revali, and Zelda who suffered issues. Impa relies on creating clones to deal the most damage, breaking the flow of combat, while Revali and Zelda lack impact initially. Thankfully Age of Calamity doesn’t really care which characters you use outside of certain unlockable challenges.

Age of Calamity also has some missions where you control one of the Divine Beasts. These are here as power fantasies. Each one of the available titans can deliver a barrage of pain to thousands of enemies in a single salvo. That’s not to say enemies don’t fight back, they make an attempt. However, hurling fireballs or all sorts of explosive bric-a-brac, only for a shield to thwart their plans makes their efforts seem feeble at best. Initially these feel great to play, but upon reflection I felt that victory in these segments was undeserved. 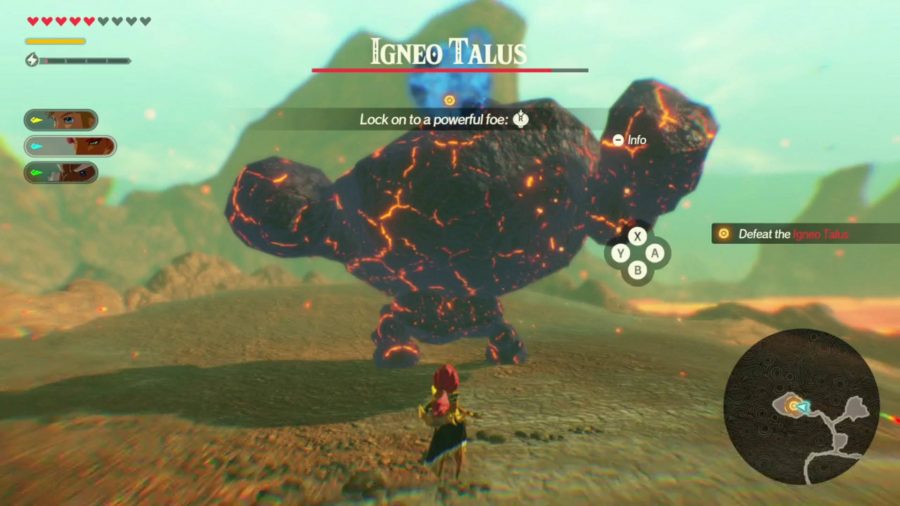 I did like the overall combat a lot, but where I think Age of Calamity drops the ball in a big way is with the overall performance during intense action. It doesn’t really matter if the Switch is docked or in handheld mode, Age of Calamity has a really hard time giving you a persistent frame rate, dipping into single figures when the action gets too much for the Switch to handle. When you consider that the base frame rate for Age of Calamity looks to be 30, this is a poor showing.

Outside of missions, there’s a metric ton of side quests and challenges to complete, and Age of Calamity is not ashamed to throw everything onto you at once. Like a terrible boss dumping a fat stack of papers on your office desk, completing a mission will reveal at least ten side quests and a handful of challenges. A fair portion of the game’s side activities are just unnecessary bloat, but that’s largely down to moments where I have to grind for items that may not always appear, like that last Hinox toenail.

The majority of the unlockables are hidden throughout these quests and challenges. Each character has multiple upgrades, such as combo extenders or increased life/special bars. Shops and other facilities will also open as you complete quests by handing in resources and items, netting you more stuff and challenges along the way. On paper there are a rather impressive number of quests and challenges, but there’s only a small amount of variety in challenge conditions. To those hoping that completing Age of Calamity 100% was going to be easier than in Hyrule Warriors, I’d argue that it is perhaps even more tedious.

Hyrule Warriors: Age of Calamity is an impressive game overall that’s only badly hampered by its performance and how it edits translated voices into the game. But a bigger blemish is a bit more apparent the closer you look at it. On the surface it’s a competent Musou spectacle that ticks all the appropriate boxes for the combat, and it does a far better job at replicating the style of a previous Legend of Zelda game than Hyrule Warriors did. There’s still perhaps too much stuff to do if you wish to see everything; you’ll probably only finish it by the time the sequel to Breath of the Wild comes out.

Hyrule Warriors: Age of Calamity is a fantastic way to tide you over until Breath of the Wild 2, if you can forgive the dodgy frame rate and several other warts hidden within