It all starts with a crown. You inherit a run-down kingdom of overgrown forests and mysterious ruins. Your subjects are poverty-stricken, living in ramshackle hovels. But all it takes is a little gold to straighten these things out. A coin dropped here can train those poor subjects into builders and hunters. Another coin dropped over here can level the forests, expanding the frontier and making way for farmland. Even more coins can build walls, watchtowers, and hire soldiers. With a little gold, you can create yourself a true kingdom.

But as soon as you start building, the Greed appear, monsters who are only happy when they’ve taken everything you’ve built. Each night they attack, and so you must raise your walls higher, create ships and sail to new lands, hoping you can outrun them a little longer this time, that you can end the cycle, and keep hold of your crown.

It’s a simple setup: a king builds, and monsters destroy. But to call Kingdom Two Crowns a simple game would be a real understatement.

When I wrote my Kingdom Two Crowns review back in June, I’d honestly never played anything like it before. Micro-strategy was a new term to me, but I quickly came to realise how well suited this genre was for mobile. Kingdom Two Crowns takes a genre that is usually very complex – management sims – and boils it down to its most basic elements. You are a king, a gold-giver, and your coin pouch is how you interact with the world.

A single tap will drop a coin, transforming a citizen into a worker or ordering a tree chopped down. Three taps might build a watchtower, or dam a river. And ten taps might upgrade your town centre. How you use your coins, and what you choose to invest in is the true strategic element of Kingdom Two Crowns, as you balance civic development with defence. But your coin pouch can also overflow, meaning coins start to drop off your person. 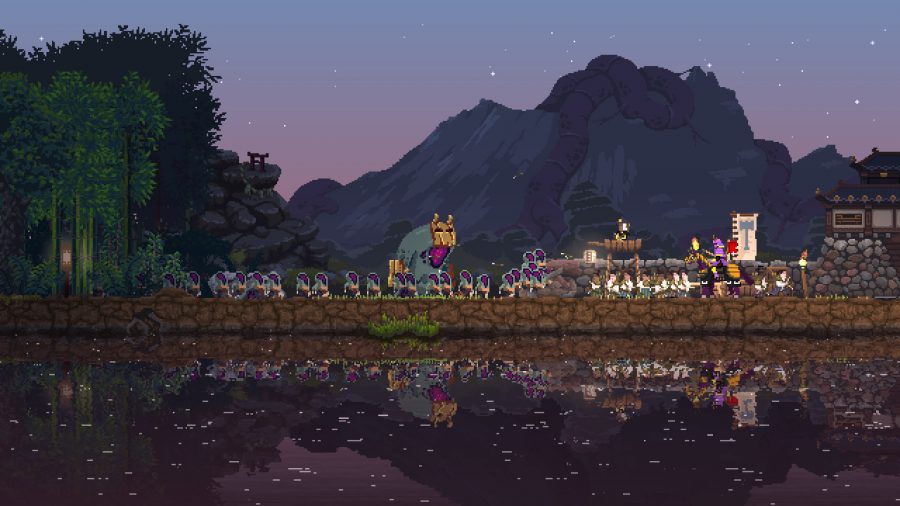 The second element of Two Crowns play is your steed. As a monarch, you ride a horse above your citizens, which also allows you to escape from monsters, but just like they thought in the olden days, the world is flat, so the bigger your kingdom grows, the harder it is to oversee your borders and defences. If you grow too large you’ll be desperately riding from one side to another when night comes, trying to make sure the Greed haven’t breached your walls and overrun your defenders. Though this can be improved by finding steeds out in the wild, whether a giant stag, or a griffin, which can blow monsters away with a flap of its wings.

But one of the smartest parts of Kingdom Two Crowns is that you can’t fight the monsters. Just as in chess, your king has to mainly rely on others fighting for him. Coins and your steed are the only two ways you interact with the world in Kingdom Two Crowns, but in spite of that simple approach, the game has massive depth of discovery. 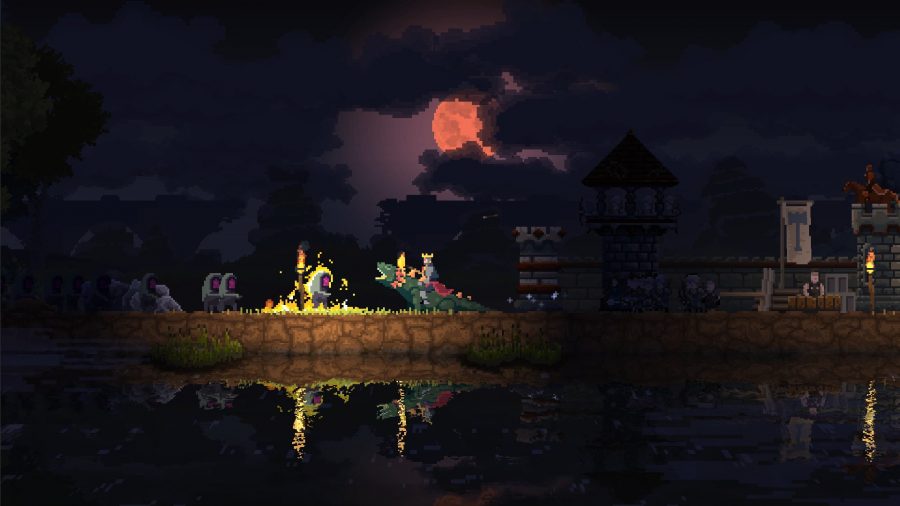 There are whole building systems, upgrade trees, loads of different unit types to train, and secrets to discover in the wider world. And the best part of it all? Kingdom Two Crowns doesn’t tell you a damn thing. It just gives you a simple means with which to interact with the world and lets you learn for yourself through trying and failing. And you will fail. Your walls will topple, your soldiers will be defeated, and you’ll lose your crown again and again. But the next time, you’ll know how to better beat the Greed.

I think it’s this wonderful combination of simplicity and depth that makes Kingdom Two Crowns such a memorable micro-strategy game, and one of my favourites this year. And despite how stressful and addictive it is – second only to Don’t Starve, in my mind – it has moments of peace and tranquility. Riding through a beautiful forest on your horse as a gentle soundtrack plays, you could almost forget about the crown weighing heavy on your head.