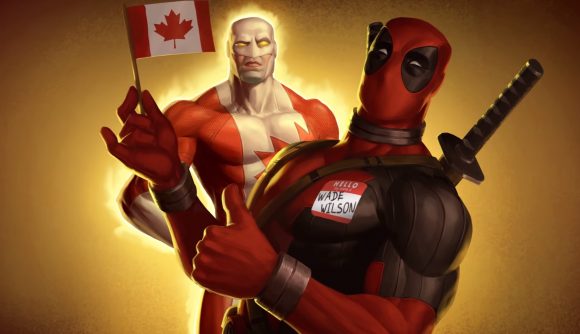 In celebration of Canada Day, which falls on July 1, Marvel Contest of Champions is teasing two new characters coming to the game. These Canadian all-stars are Sasquatch and Guardian, and are arriving in the action-superhero game at some point in July. Many of the greatest superheroes are Canadian, so we’re happy our commonwealth cousins are getting some well-deserved respect.

Contest of Champions also released an all new motion-comic trailer, titled ‘Hooray for Canada!’ The trailer celebrates all things Canadian, as well as featuring a little cameo from the most popular Canadian superhero: Deadpool. The trailer also has a moose – though we’re informed it sadly won’t be available as a hero, dashing our dreams of moose-man.

For those that don’t know, Marvel Contest of Champions is a superhero battler and gacha game where you collect all of your favourite champions from across Marvel’s expanded universe. You then use these champions to create the ultimate fighting force, undertaking quests to topple super-villains and all manner of nefarious scheming. All in a day’s work for a hero!

You can watch ‘Hooray for Canada!’ below, if you want a closer look at Sasquatch and Guardian:

These two champions arrive just in time for the new Contest, which Kabam has revealed the setup for:

“A strange smuggling ring is moving Crystals around The Battlerealm and has caught the attention of two members of Canada’s Alpha Flight, Guardian and Sasquatch! They set out to investigate this phenomenon, though unbeknownst to them, a mysterious benefactor is watching as they dig deeper into the unknown.”

Sounds fun to us! If you want to play Marvel Contest of Champions, you can find it on Google Play and the App Store. If you want more battle-based games, be sure to check out our list of the best mobile MOBAs.