A boy who dreams of being a hero. A dungeon. It’s a narrative that’s been around since Link first climbed out of his tree because that talking light wouldn’t stop hassling him. But it’s easy to see why the trope has perpetuated. Something about the rags to riches journey of a fledgling hero lends itself perfectly to a gameplay loop: you adventure, you get loot, you buy better equipment, and you adventure a little harder. It’s satisfying stuff.

But the formula has grown a little stale through overuse, which is why it’s exciting to see games that are really trying to play with that classic format – games like Digital Sun’s Moonlighter. This dungeon-crawler/shop-keeper sees you step into the shoes of Will, a young boy who dreams of being a hero, but is actually a merchant.

See, Will runs the Moonlighter, the most famous shop in the dungeon town of Rynoka. Once upon a time the streets were jostling with starry-eyed heroes venturing into the nearby five door dungeon, but once the doors were sealed, the town fell into decline. So every night, Will picks up his broom, and ventures into the last open door of the dungeon, fighting monsters to collect things to sell in his shop.

It’s a fantastic concept, and can’t help but remind me of Stardew Valley, as you inherit your grandfather’s store, and work to revitalise the failing town of Rynoka by helping to support local businesses. The concept is also represented in a strong gameplay loop, as in the day you run your shop, and at night, you venture into the proceedurally-generated dungeon in search of secrets and loot.

Both of these things feed into each other wonderfully, as you can either choose to sell your items, pumping the money into upgrading your shop and the town, or you can use them to upgrade and forge new equipment. This means Moonlighter is a constant balance between what you sell and what you keep back for yourself. 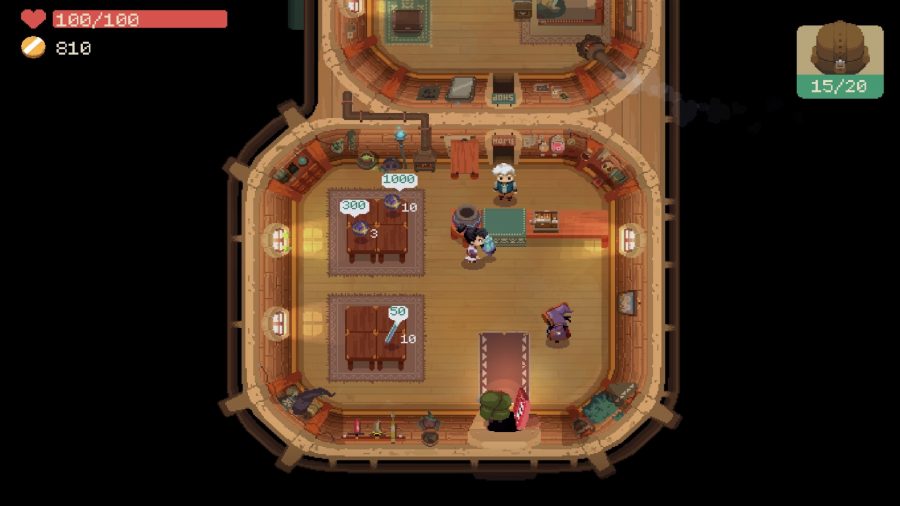 But this balance is also present in the dungeon-crawling itself. Will only has so much space in his bag, meaning you have to choose items that either sell well, or that help you with upgrades. It’s also a balance of risk and reward, as each run takes you deep into the dungeon. You can turn back with your amulet anytime for a small cost, but if you die, you lose most of the items you’ve gathered. These tensions and the way they feed into each other really makes Moonlighter special.

I've rarely felt as immediately drawn to a voiceless protagonist as Will, a boy who picks up a broom and heads off to face danger in the dungeon, in order to keep his grandfather's shop alive. It may be a mundane reason to go dungeon-delving, but he adds a very human dimension to the usual generic hero archetype.

Another thing is the genius pricing mechanic. Will gathers items in the dungeon, but he doesn’t know what they’re worth, so in order to sell an item, you have to set a price, and judge the reaction of the customer. It’s a mini-game of adjusting the cost to get it just right, but some items also shift price wise if you are selling a lot of them, due to lack of demand. Customers also enter your shop looking for specific items, such as weapons, so you’ll have to lay out a new item just for them. Moonlighter is as much a dungeon-crawler, as it is a shop management simulator, and you can see that in the depth of its mechanics. 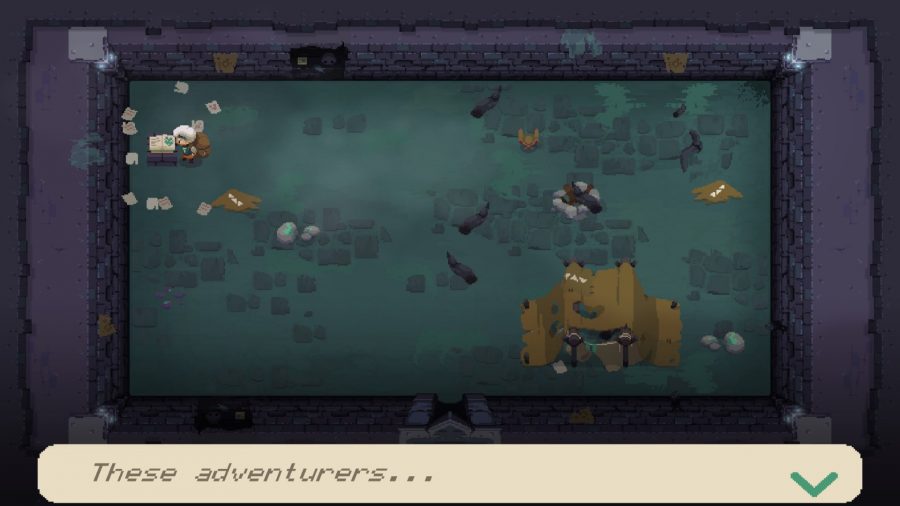 But that’s enough about retail. Let’s talk about the dungeon-crawling! Everytime you enter the dungeon in Moonlighter, its structure and general contents change, save for a few key points, such as the camps above, where you uncover lore, bosses, and healing hot springs. I don’t know how the game played when it released on PC, but easy and normal difficulty both feature auto-attacks, where Will automatically targets the nearest enemy, unless you tap on a different one, or tap to tell him to move away.

The auto-attacks really help to make the game feel more casual and suited for mobile, especially as this isn’t a dual stick movement game, and you have to tap to move, or swipe to dodge. But they also retain some depth as who you target first in a room makes a big difference. Sword and shield is the best pairing for these auto-attacks, as it mainly makes the gameplay revolve around timing your shield use. But if you want something a little more intense, you can choose hard difficulty, which gives you control of attacking as well. 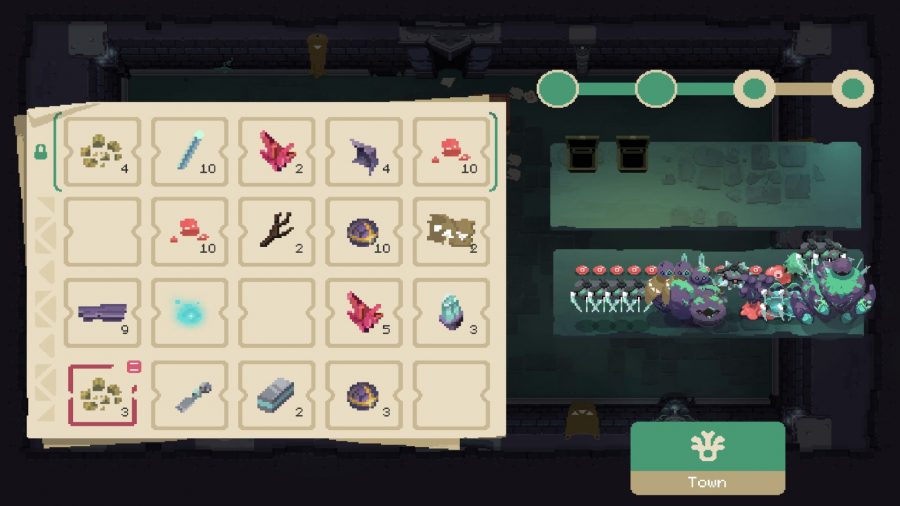 Moonlighter is a constant balance between what you sell and what you keep back for yourself.

There are also bows, spears, gauntlets, or greatswords to use, each with their own special ability. With these weapons, the key to survival is movement, especially in the boss fights. But Moonlighter is tough, and initially you’re going to die a few times as you get overwhelmed, or make mistakes. Luckily, you can unlock the ability to make portals in dungeons for a price, so you can warp to where you left off.

Money also isn’t really an issue, as you can sell off what you don’t need, and add upgrades you want to the wishlist, so you know what not to sell. It’s honestly hard to find anything to dislike in Moonlighter’s mobile port. The game is difficult, sure, but that difficulty can be largely mitigated by the auto-attacks, and using sword and shield. The gameplay loop also lends itself so well to mobile, as you can choose the length of your dungeon run, and sell off the proceeds, gradually upgrading Will’s equipment, and the store itself. 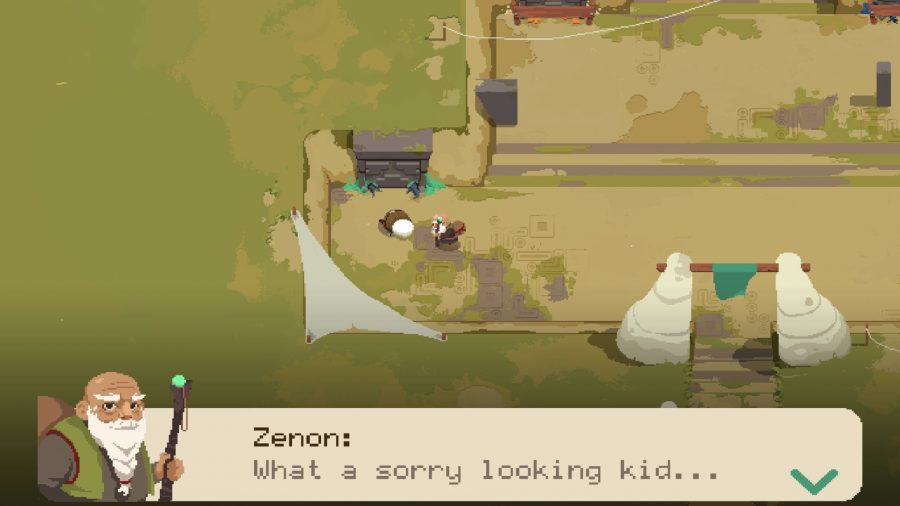 All in all, Moonlighter is a smart twist/subversion of the hero formula. It brings with it the nice homely feeling of Stardew Valley, as you upgrade the town, and keep shop, but it also adds dungeon-crawling with depth and tension, as you balance the classic risk vs. reward formula. If you like either of the genres that go into making this game, you’ll find something to enjoy in Moonlighter.

Moonlighter is available on the App Store from November 19.

Moonlighter is truly the sum of its parts, a brilliant combo of homely shop-keeping and dungeon-crawling depth