SteamWorld Quest is the second game in the franchise to hit iOS following the wonderful SteamWorld Heist. But aside from its charming steampunk aesthetic and a fondness for side-on turn-based combat, the two games share surprisingly little in common. A far better comparison, at least in terms of its card-driven combat mechanics, is Slay the Spire. Like that Game of 2020 contender, SteamWorld Quest is essentially a succession of tit-for-tat encounters where you must bend a growing deck of powerful playing cards to your will.

But even then, SteamWorld Quest: Hand of Gilgamech clanks along its own distinctive path, starting with the combat system. Each turn here allows you to play three attacking and defensive cards from a random hand, drawn from the separate decks of each team member. You can only play your more powerful cards when you’ve built up enough of the game’s steam currency, which is accrued by playing weaker cards.

This feeds into the game’s clever combo system, whereby playing three cards from a single character’s deck triggers a devastating (or restorative) bonus move. You’ll also encounter special cards that benefit from being played in tandem with the decks of other team members, and there’s a subtle discard system that lets you partially reshuffle your hand.

It’s not just in the combat system that SteamWorld Quest: Hand of Gilgamech distinguishes itself form its peers. This is a game that welcomes traditional RPG mechanics with open arms whilst raising a metallic eyebrow.

You’re free to roam from screen to screen in between battles, slashing coin-ridden boxes and discovering hidden chests. There’s a rudimentary card crafting system, and you can even equip your heroes with new weapons and armour.

There’s also a fully fleshed out story, with snappily written dialogue delivered by likeable characters. You won’t find anything particularly deep or original, but it simultaneously sends up and celebrates classic heroic tropes with considerable warmth and enthusiasm. 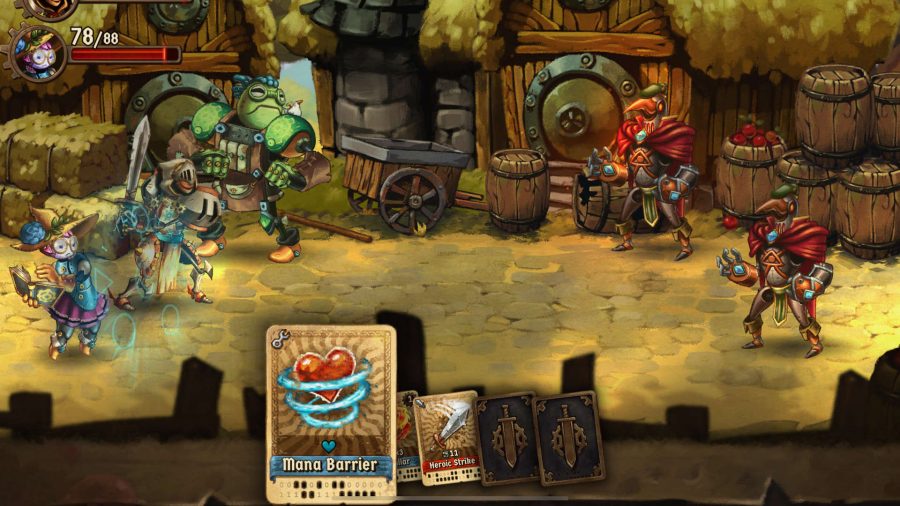 Developer Image & Form certainly has form with its images, having produced a distinctive hand-drawn art style that ties together the five-strong SteamWorld series. This particular entry is a world of knights and wizards rather than pirates or prospectors. But each character is still a beautifully animated automaton, with all the creaky joints and rusty surfaces that we’ve come to know and love.

SteamWorld Quest: Hand of Gilgamech is a stupendous card-based RPG, with a clever combo-driven combat system

It always seemed likely that this Switch and PC port would play best on mobile, and that’s a view that’s largely been vindicated. You can’t beat a tap-and-drag system when you’re dealing with card battlers, and while world navigation isn’t quite optimal, the core combat feels great.

The interface isn’t perfect, however. I occasionally found it a little tricky to select the top-most enemy in a group when playing on iPad, for example, while it’s annoying that you have to tap through a menu system to gain information on your rivals when a direct tap would have sufficed. 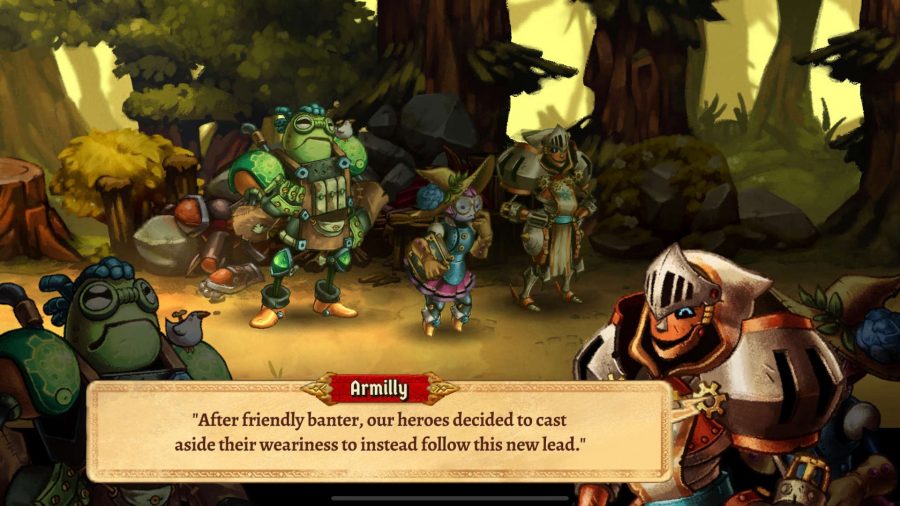 There’s no iCloud save support either, which is particularly irksome in a premium title. As such, more or less my entire time with the game was spent on iPad. I did quickly put it through its paces on the iPhone 12 mini, however, and it remained pleasingly playable on that tiny screen.

Quibbles aside, SteamWorld Quest: Hand of Gilgamech is a stupendous card-based RPG, with a clever combo-driven combat system and a lovingly drawn world that doesn’t take itself too seriously. It’s right up there with Slay the Spire as the best game of its kind on iOS.

A brilliantly rendered, deceptively involved card battler that simultaneously tips its hat and cocks a snoop at traditional RPGs