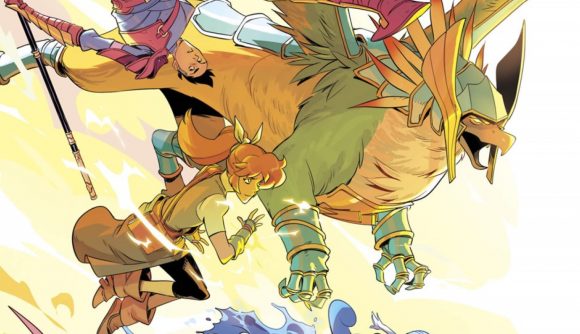 Com2uS has announced a team-up with Skybound comics to create a spin-off of Summoners War, its popular RPG. Summoners War: Legacy was revealed during a panel at the Skybound Xpo and acts as a prequel to the main game. Set 35 years before the climactic events of the original, Legacy explores new characters such as Abuus, Rai, and Tomas, delves further into the land Alea, and looks more closely at the fate of Durand’s parents. Legacy also represents an opportunity to expand the lore of the original, while also giving fans a new story experience.

“Summoners War is one of the world’s top mobile games thanks to its rabid fanbase, roaring esports community, and a rich in-game universe,” says John Nam, VP of Summoners War’s IP strategy department. “We’re expanding the IP into new frontiers by partnering with Skybound Entertainment on our first official comic book series, Summoners War: Legacy. Our friends at Skybound are a powerhouse of imagination and a perfect partner for helping Com2uS grow Summoners War in new directions.”

Summoners War: Legacy runs to around 40 pages, and you can pre-order it right now on the Skybound site.

If you want a look at the actual game, here’s a trailer for Summoner’s War:

For those that don’t know, Summoner’s War is a fantasy RPG that sees you enter the Sky Arena and face off against a variety of monstrous foes. Summoner’s War is also one of the most popular games on mobile with over a 100 million players, and over a billion dollars in lifetime revenue.

If you want to play Summoner’s War for yourself, you can find it on Google Play and the App Store. If you’re looking for some similar games, be sure to check out our list of the best mobile RPGs!