Part of the reason for the Nintendo Switch’s enormous success is that it gives players the choice of playing it as a home console or as a handheld. Everyone has their preferences, but if handheld play is your way, you’re going to want to invest in a Switch carry case.

If you’ve got big pockets, you might be able to squeeze your Switch into them, but it won’t really be safe there. What if you fall and land on it? CRUNCH. That’s the end of your Switch. RIP to all your Animal Crossing villagers. I hope you’ve got a comfy bed, because it’s going to be hard to sleep at night with all that digital blood on your hands.

Of course, those who use cloud save will be able to avoid that situation, but even if your data is fine, having to replace a wrecked Switch is going to be a costly irritation. On top of the peace of mind that a Switch travel case will give you, it’s also definitely the easiest way to transport games. After all, you’re not going to want to have to awkwardly carry five game boxes, and keeping those tiny little cartridges loose in your bag is liable to make you more anxious than a blue shell when you’re five feet from the finish line.

While it may be easy to decide that a Nintendo Switch carrying case is essential to your gaming repertoire, it might not be quite so easy to decide which one you’re gonna go for. There are lots of different designs out there and all of them are very appealing in their own way. To try and help you narrow down your options, we’ve brought together a selection of the best Switch cases for you to peruse at your leisure.

Here are our suggestions: 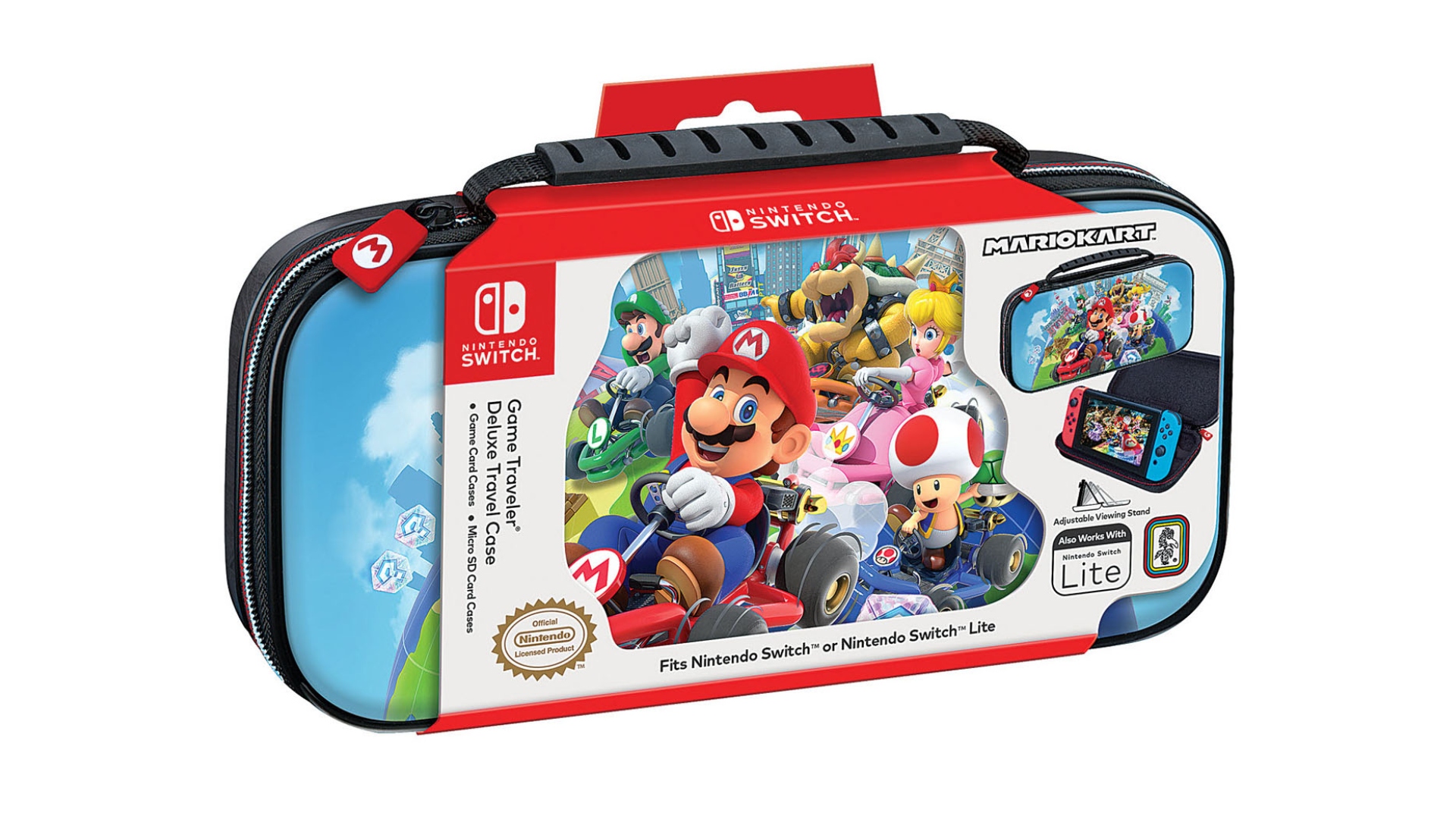 Almost everybody loves Mario Kart. There’s a reason Mario Kart 8 Deluxe is the best selling game on the console. The joy of racing around fantastical tracks as your favourite characters from the Super Mario series (plus a few guests) appeals to gamers of all ages and skills, making it the perfect party game.

Curiously, the art used on this case actually comes from Mario Kart Tour (Nintendo, release it on Switch, please, my Android can’t run it anymore), but that doesn’t detract from it looking pretty swish. Inside, you get a couple of plastic cases designed to carry four cartridges each, which tuck nicely underneath your Switch when it’s in place. 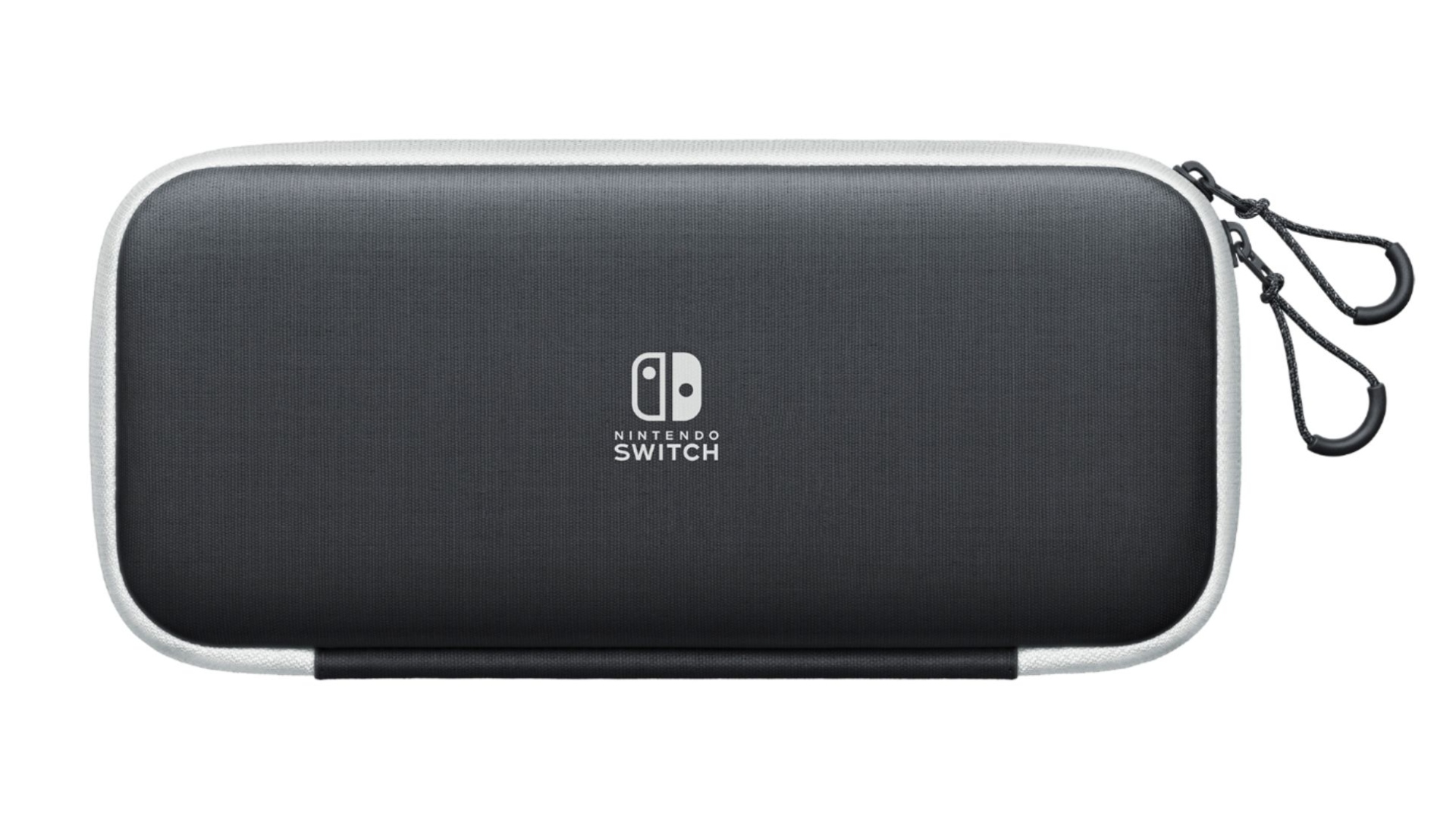 Not everybody wants to display their favourite franchise on their Switch case. If you’re looking for a run of the mill option, then this is the one to go for. It comes with two screen protectors as well, one for regular Switches and one for OLED Switches. 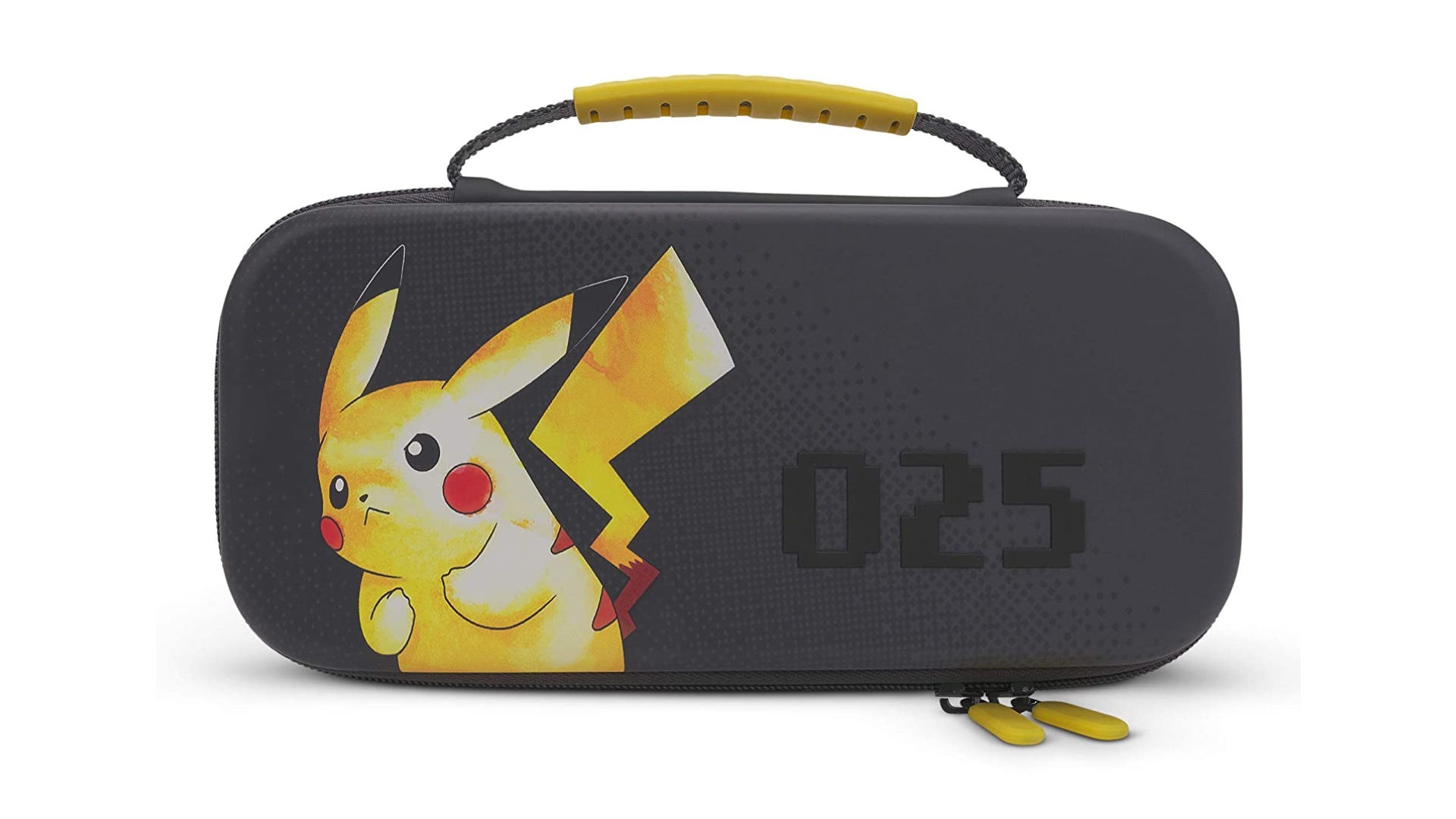 Pokémon is one of the only Nintendo franchises that can really rival Mario when it comes to overall popularity (sorry, Zelda). With 898 Pokémon at the last count (thanks, Bulbapedia), everybody has a different favourite and while not every single Pokémon has its own carry case, there are a number of different designs based on different pocket monsters. One has a retro piece of Pikachu art alongside an emblazoned number 25, one gives you a sweet Poké Ball motif, another is shaped like a Snorlax head and if you can’t choose a favourite, you could go for one with multiple different Pokémon on it. It’s a good selection. 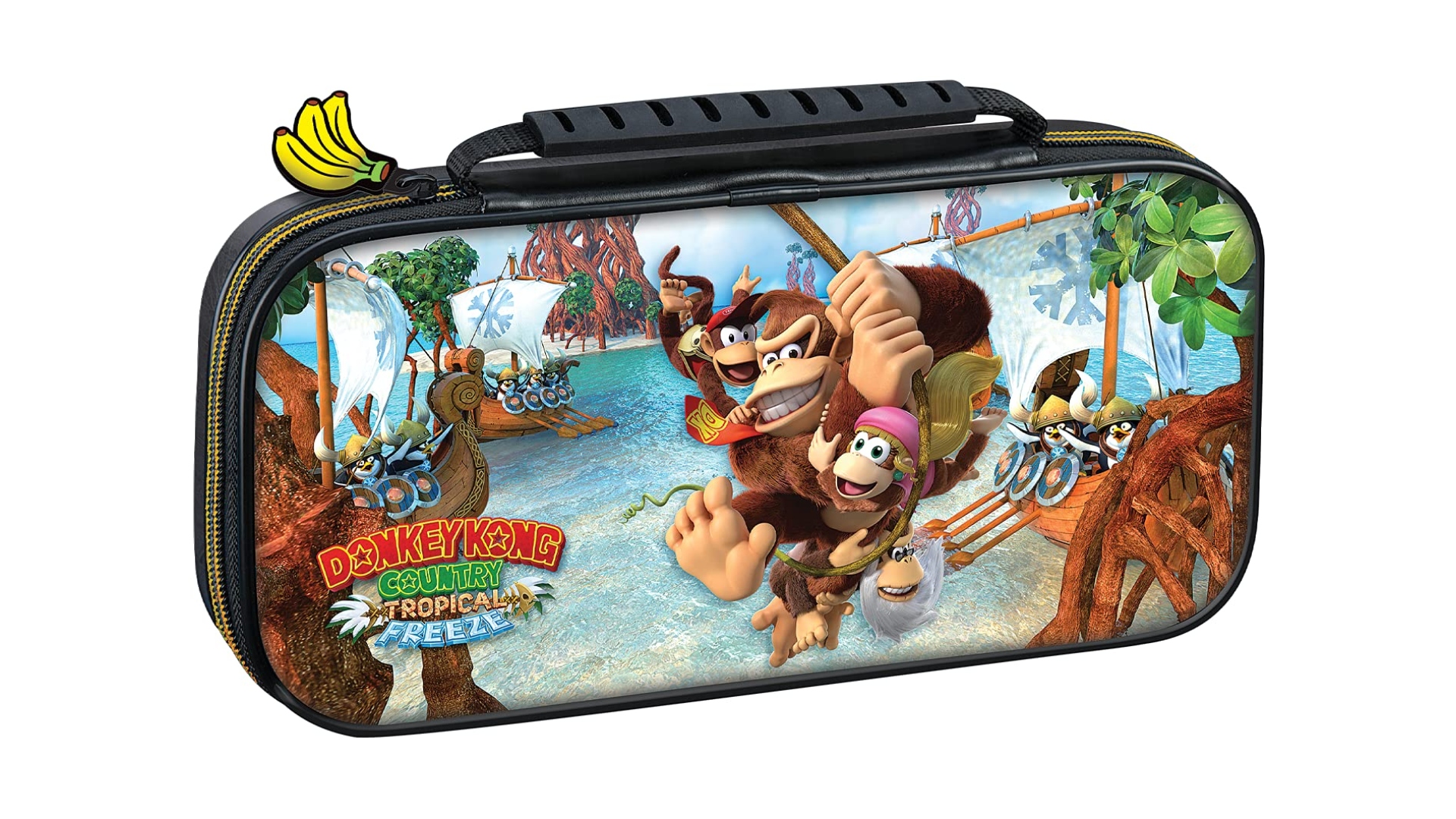 DONG – DONG – DONG – KEY – KONG! While the Nintendo Switch is sorely lacking in its own unique Donkey Kong game, it does, at least, have a remake of Donkey Kong Country: Tropical Freeze. With many fans considering this as potentially one of the best platformers on Switch, it’s by no means a bad addition to the Switch library.

Fans who have a soft spot for Donkey Kong’s battle against the Snowmads might be delighted by this Switch case with a lovely piece of Tropical Freeze art on it. Hey, it’s the one my Switch travels around in. 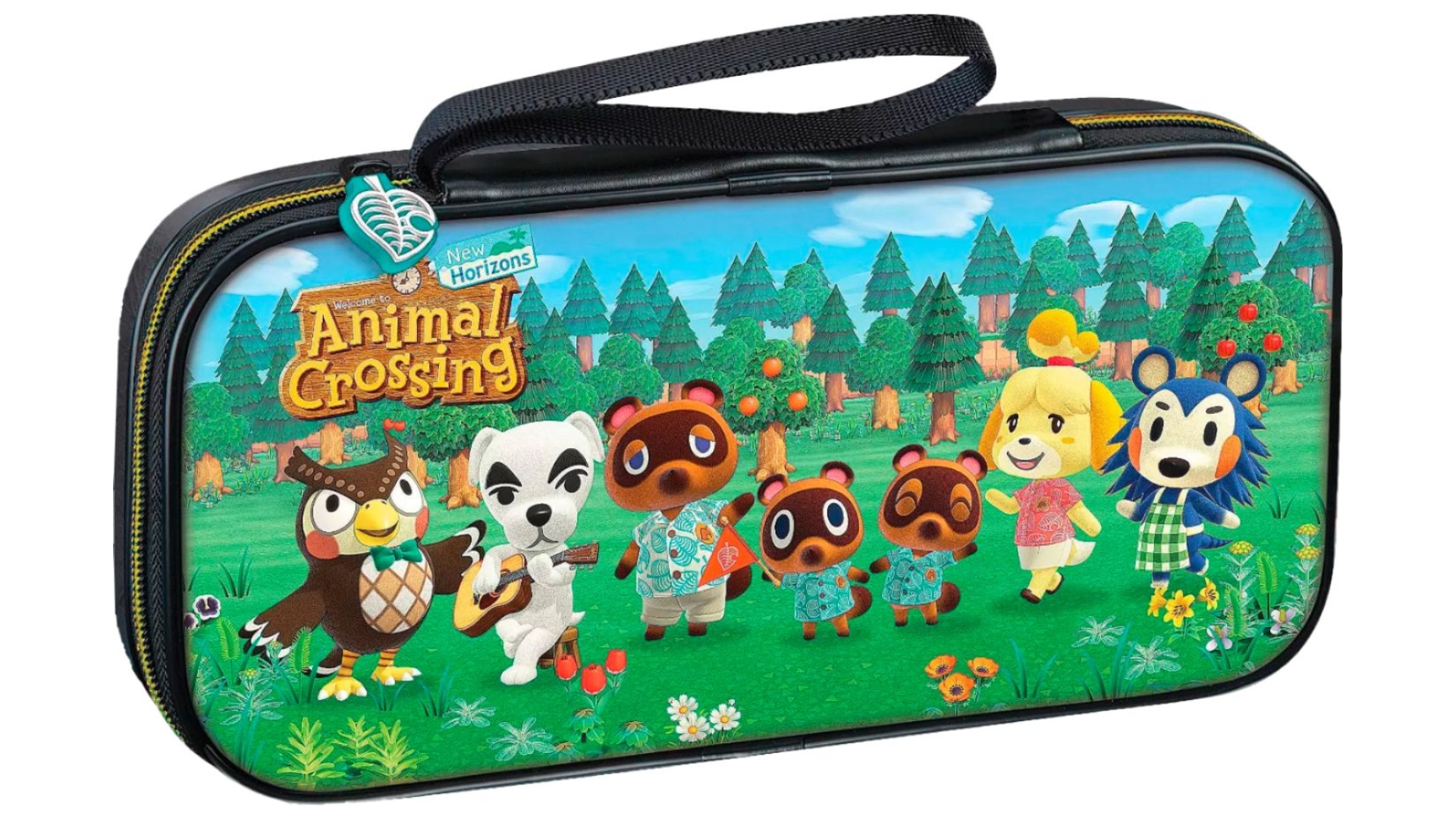 Many people have found themselves falling in love with Animal Crossing for the first time on the Switch, and those who were already smitten by the animal-based life sim found their passion reignited when Animal Crossing: New Horizons was released. There are a few different Animal Crossing Switch cases around, ranging from ones that have a colourful character lineup on the front, through to ones which have a more subtle leaf motif. Either could be a good option for fanatic islanders. 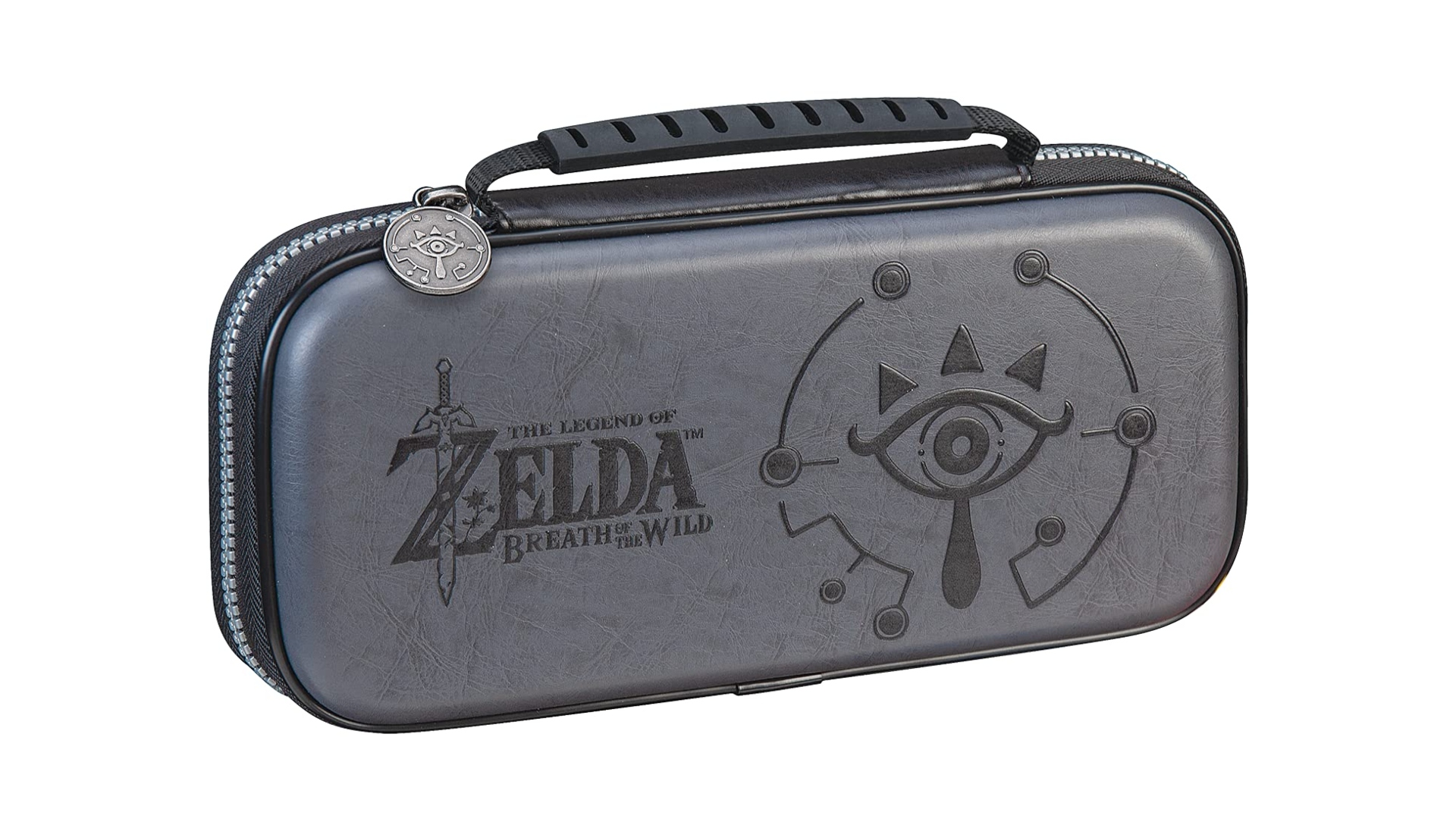 Zelda fans have been well served by the Nintendo Switch. Breath of the Wild was one of the first games on the console and it was soon followed by various spin-offs and remakes. Link is the star of two of the games in our best Switch adventure games article.

On top of that, various classic Zelda games are included in the Nintendo Switch Online subscription service and Link’s also been popping up in lots of cameos and crossovers. Heck, you can even get the Master Sword in Skyrim on the Switch, which is the epitome of cool.

To celebrate the enchanting kingdom of Hyrule, why not protect your Switch with a case that comes with some slick Sheika markings? 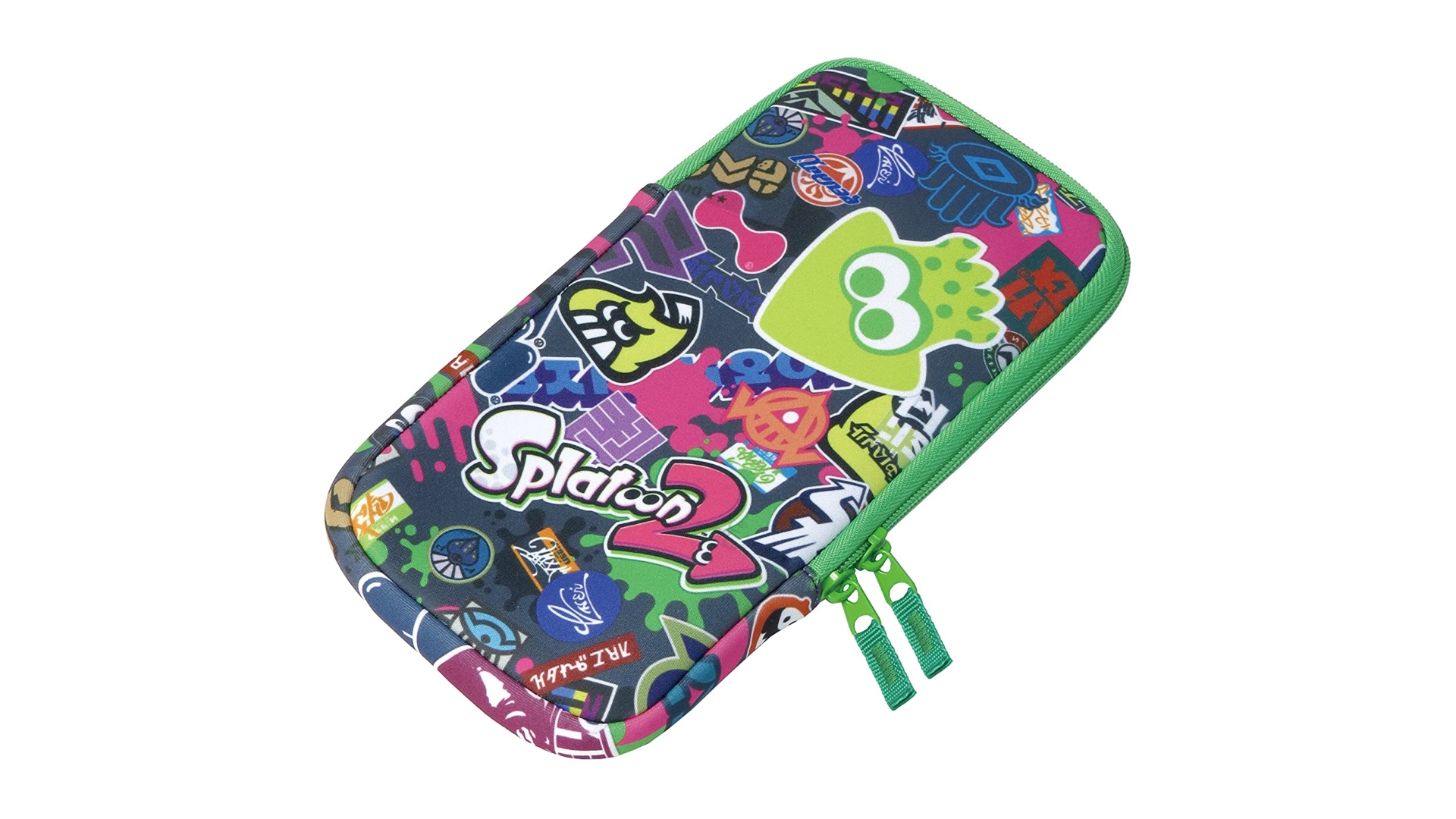 Splatoon 2 is easily one of the best multiplayer games on Switch in the same way that its predecessor was one of the best games on Wii U. Not only is its addictive gameplay part of what enchants people with Splatoon, but also its loveable cast of Inklings and the world that they inhabit.

Seven years ago, we were meeting Inklings for the first time, but today they’re some of the most iconic Nintendo figures of recent years. If you’d like a Switch case that’s covered in vibrant art from the world of Splatoon, then you can’t go wrong with this option. 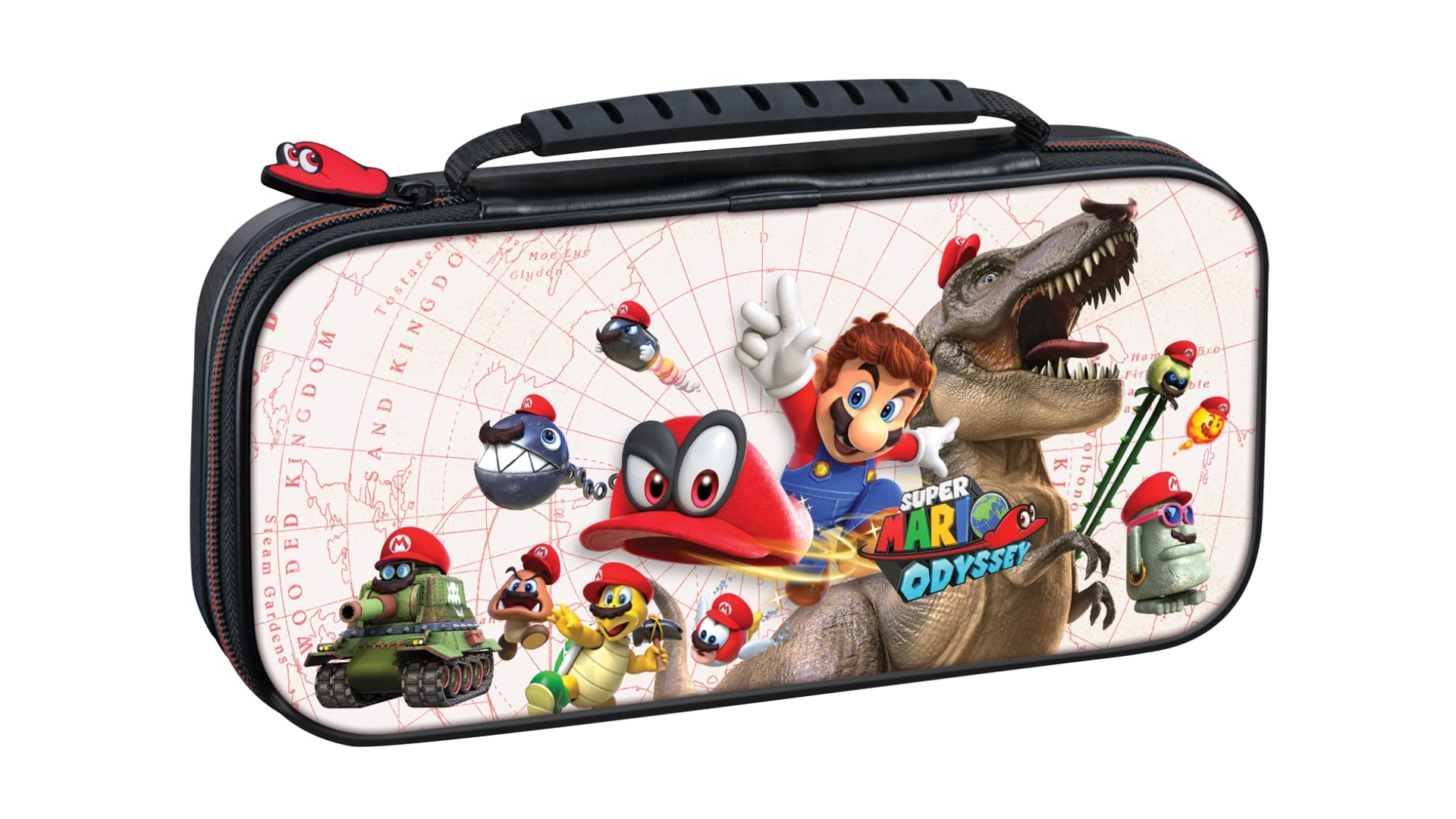 Returning to the 3D platforming gameplay of Super Mario 64 and enhancing it for the modern era, Super Mario Odyssey was a game that some fans had been waiting for for a long time. If you’re among the very many fans of this game, you might want to get your hands on this Switch case which features official artwork from the game, including the iconic Mario-possessed dinosaur. 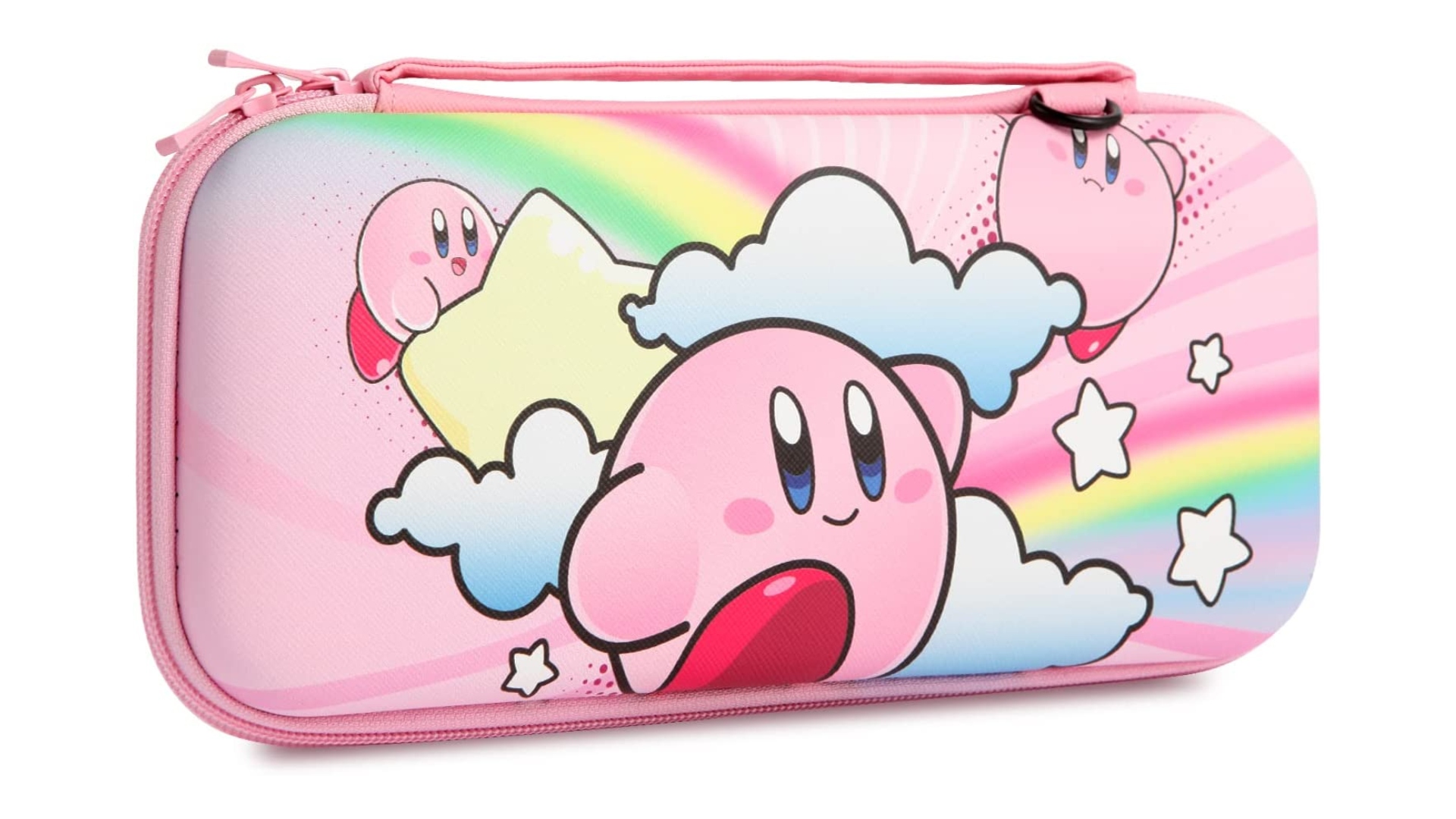 With Kirby and the Forgotten Land getting everybody excited about this little pink godslayer and Kirby Star Allies being one of the best-selling games in the series, the Switch has been a good console for Kirby. If you’re a Switch-owning Kirbster, then this carry case might just be the best one for you.

Looking for more Switch accessories? Have a look at our guide to Switch controllers that won’t give you Switch drift.