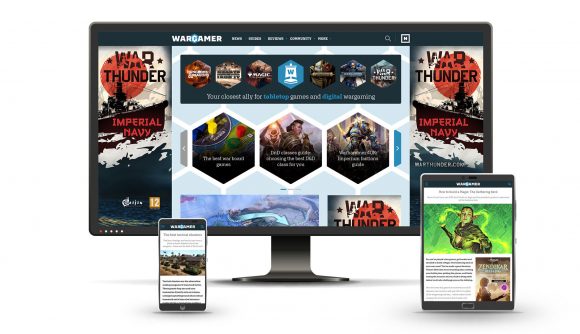 It’s coming up to a year since Pocket Tactics relaunched with a lovely new site and dedicated in-house team of mobile gaming experts. Of course, the excellent editorial content you came here for in the first place remained. There was just more of it – lots more, as well as a much-expanded horizon on the types of games we cover.

But we’re not here to celebrate that today. Instead, we’re excited to announce that our sister site, Wargamer, has undergone the same treatment – and doesn’t it look lovely? We’re not jealous at all about the hexes. Not. One. Bit.

As you may know, Wargamer and Pocket Tactics shared a close relationship long before they joined the Network N fold. Along with Strategy Gamer, which has found a new home over on PCGamesN, the three sites had a shared identity, helmed by the wise wizard Joe Robinson. Thanks to that awesome new design, that’s once again the case visually, though in terms of editorial content, everything has been firmly turned up to 11.

We’d like to extend a warm welcome to Alex Evans, the new Wargamer editor. You can read all about his love of tabletop and digital wargaming over on the welcome post. You can also just take my word for it – I’ve seen his garage. Suffice to say, Wargamer is in really good hands.

Also joining him as staff writer is Callum Bains, whose hair is almost as impressive as his portfolio. Callum has written for the likes of TechRader and GamesIndustry.biz, but is, more importantly, a huge fan of grand strategy and hex grids.

At this point, you’ve probably noticed that we’ve said tabletop gaming a few times. Well, much like when Pocket Tactics expanded its horizons to cover more than just strategy games, so too has Wargamer. Naturally, wargaming will always play an enormous role on the site, but, as the editorial team rightly point out in their welcome post, the world of wargaming has expanded drastically over the past few decades, and now encompasses a wider range of genres. Long may that be the case.

We recommend you head straight on over to the new Wargamer to check it out – it really is lovely. Make sure to follow the team on Twitter and Facebook too, so you don’t miss out on any of the new content.