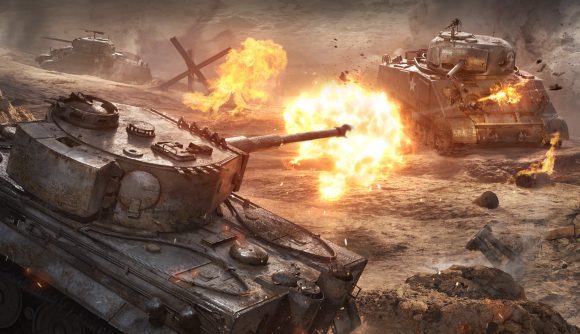 December 17, 2020: Our Warpath giveaway has now ended. Codes will be sent out later today

Winning the war all over again is a tough business, especially in mobile strategy game Warpath. You find yourself in an alternate version of World War II, facing down the fearsome forces of the Raven army. To stand any chance of defeating them you need to build your base, make alliances, and muster a powerful military force. But every army marches on its stomach, and every war effort need supplies.

That’s why we’ve partnered with Lilith Games this week to give away some codes for Warpath. Each code will get you 300 gold, 40 three minute building rushes, 15,000 Arms xp, and two emergency energy – more than enough to reignite the war effort.

Warpath is only on Android right now, but the game is coming to iOS early next year. But if you are an Android user, and managing a military base, collecting characters, and taking the fight to the Raven army with a variety of units sounds like a good time, be sure to hedge your bets in the giveaway box further down the page.

To enter all you need to do is fill out the instructions in the entry box below. If you do decide to enter, though, please have a glance at our terms and conditions first.

We’ll send the codes out to our lucky winners next Thursday. If you want to get started with Warpath in the meantime, you can find it on Google Play. We also have a Warpath code list for current in-game freebies, and a list of the best mobile strategy games if you want something similar to play!