Following the success of Xenoblade Chronicles 2, which launched during the Switch’s Hollywood first year, Monolith Soft would have been forgiven for just phoning in its subsequent remaster of the technology-defying original. But no. Rather than simply bump the resolution up to HD and call it a day, Monolith Soft used the opportunity to make the game it always wanted to.

Out went the original’s blurry character models and in came new anime-inspired versions that more closely resembled the stylistic shift of the sequel’s. The music was remastered, and the UI completely overhauled, with new quality-of-life features that brought greater clarity to its complex combat system. You can also wear the cosmetics of any piece of gear that you’ve unlocked, rather than look like the fantasy gear version of Frankenstein’s monster.

Curiously though, the world and environments saw very little changes outside of a resolution bump. That’s actually not all that curious when you consider that the original Xenoblade Chronicles probably shouldn’t have existed on the Wii in the first place. It was a technical marvel at launch, and its world is just as visually appealing in 2020.

Future Connected takes place on the Bionis Shoulder, a region that was famously cut from the original experience. I really admire that Monolith Soft decided to deal with that unfinished business once and for all, and to provide a new adventure as a thank you to the fans that have supported the Xenoblade series from scrappy underdog to Nintendo RPG primadonna.

Like RPGs? Here’s a bunch of the best Switch RPGs

Without going into spoiler territory, it takes place following the events of Xenoblade Chronicles. You play as characters new and old as explore the Bionis Shoulder, which features some lovely scenery that thoroughly deserves to see the light of day, and we’re glad it finally has the chance. 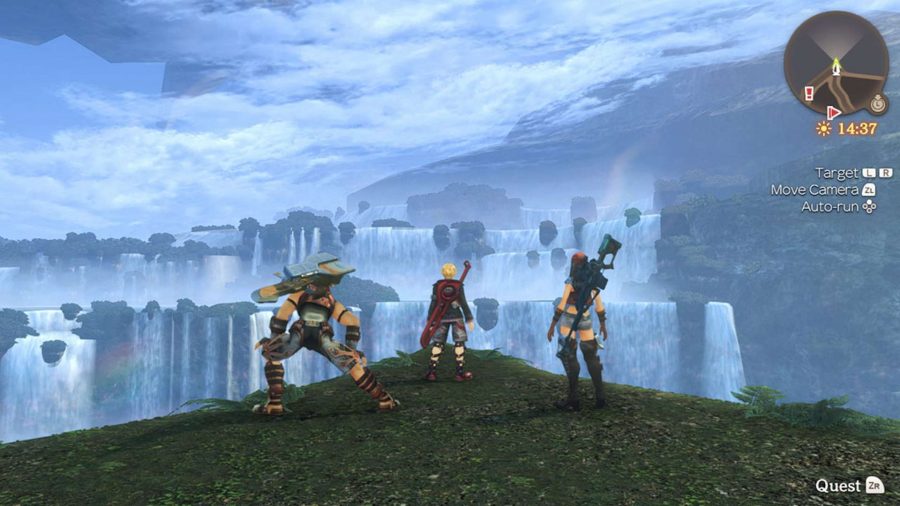 It also cleaned up some of the messier parts of the original experience – though this was likely due to Future Connected’s brief length. For example, you have to take on side quests to earn cash (monsters no longer drop it), which you can then spend on the best gear. Similarly, you now straight up collect gems from Ether Crystal deposits, with the gem you collect corresponding to the colour of the Crystal.

As a result, it’s much easier to simply get the gear that you want, which was a bit of a painful and lengthy process in the original. This lets you focus way more time on what Xenoblade does best: exploration, which, as we mentioned earlier, is an utter joy thanks to Future Connected’s beautiful and varied environments.

So for all of you publishers and developers out there planning to put out a ‘Definitive Edition’ on Nintendo Switch soon (looking at you, BioWare), take heed of Xenoblade Chronicles. This is how you do it right.