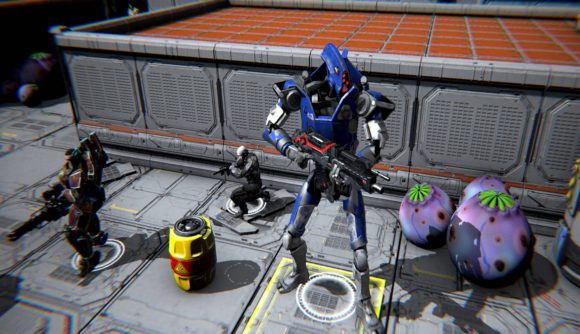 Wave Light Games, the developer of Demon’s Rise and Shieldwall Chronicles, has released its new XCOM-like Hyena Squad on iOS. The game takes place in deep space, aboard an orbital station, and it’s your job to infiltrate and rescue a VIP inmate with your team of ragtag mercenaries. The only problem? The station is infested with hostile aliens and walking dead. You must utilise your tactics toolkit to defeat these opponents, using cover, line of sight, and squad morale to emerge victorious.

Hyena Squad also gives you four distinct classes to play with, whether armoured melee specialists, heavy gunners, elusive scouts, or even mysterious psychics. By playing to the strengths of each team member, and using the environment to your advantage, you can fight your way through the game’s 12 levels, bosses, and differing objectives.

Wave Light Games is well known for its previous tactical RPGs, such as Shieldwall Chronicles and Demon’s Rise, and Hyena Squad definitely builds on the formula of those games, giving you varied combat roles to play with, as well as a destructible and varied environment.

If Hyena Squad sounds like the tactics RPG for you, check out the trailer below:

You can purchase Hyena Squad on the App Store for $1.99 (£1.99) as part of the launch day sale, after which the price increases, so if this sounds like something you might want to play, be sure to get your copy now. The game is a premium, with no IAPs or adverts.