There comes a time when even the most die-hard of armchair generals feels the urge to roll up their sleeves and get stuck in. On such occasions, there is no better way to get the juices flowing than a good old-fashioned shoot-em-up. The original Aces of the Luftwaffe was released some seven years ago and flew under the radar without so much as a murmur.

Now, those dastardly German flying aces are back, and this time they have their eyes set on a juicy big apple. Yes, the Luftwaffe is about to embark on an audacious invasion of the USA. Only the plucky pilots of the allied squadron stand in their way. However, every story has two sides, and this extended edition includes a second campaign that allows you to play as the German Nebelgeschwader, or fog squadron, who from their base within the Bermuda Triangle, embark on their own very secret mission.

Both campaigns are suitably madcap, with elements of old war films and sci-fi, complete with giant Nazi flying saucers, and steampunk-style flying trains. Don’t be surprised if you see ghosts and mutant crows also entering the fray.

With the bewildering lack of support for physical controllers, the big issue is always going to be how well touch controls work. There are two different control schemes to choose from: the default allows you to drag your finger around the screen to guide your squadron, whilst the alternative uses a floating joystick.

A set of fixed buttons, which can be positioned on the left or right side of the screen, control your guns and power-ups. Auto-fire is engaged by simply holding the fire button down. Neither method is going to replace the responsiveness of a proper controller, and both take some getting used to, but they work as well as can be expected.

Thankfully, the difficulty has been tailored accordingly; the action is rather slow-paced, and the number of enemies, and bullets on screen never reaches the crazy levels of more hardcore shooters. This leisurely speed also helps combat the unusual screen aspect. It feels strange for a mobile vertically-scrolling arcade game to adapt to a landscape view, rather than the much more traditional portrait aspect. This odd choice means that you have less time to react to enemy attacks.

On the plus side, your plane can take a considerable amount of damage, represented rather neatly by bullet holes, and cracks appearing on the screen. You have a final ace up your sleeve in the support from your wing-men, because, instead of controlling a single plane, you control a squadron of four. 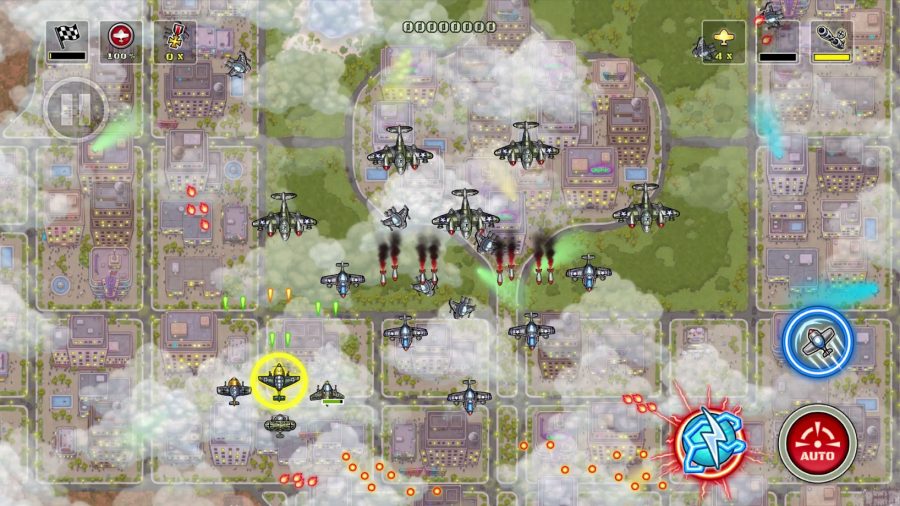 You have a final ace up your sleeve in the support from your wing-men, because, instead of controlling a single plane, you control a squadron of four

Your pilots will earn medals and eventually  will be in a position to learn new skills. They each have a unique tree of new abilities, which tend to focus on a particular field. For instance, Malissa Munro and her German counterpart, Robert Schulz, are particularly good at defence and repair. Your wing-men are in constant radio contact, sometimes you may wish they weren’t since their corny comments do begin to grate.

Anyone who has ever played Starfox will know what to expect, but they can prove useful, warning you of imminent attack, and their state of mind. This matters because each of the eight pilots have their own hang-ups. John King is prone to fits of rage, causing him to storm off into battle alone, attacking both friend and foe with impunity. Conversely, Melissa often has to skip out of the action because she suffers from acrophobia, yes, a pilot scared of heights. Almost as ridiculous as a certain German dictator being afraid of cats. 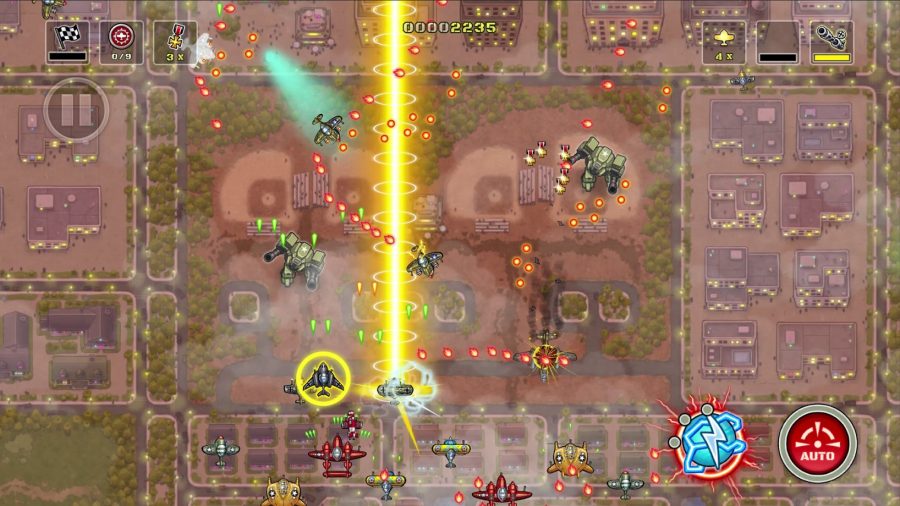 At times, Aces of the Luftwaffe feels supremely satisfying. Especially when your newly earned skills kick in, and enemy planes spin out of control, billowing smoke as they plummet earthwards. Things become even more chaotic when you collect supply crates that contain the likes of rotating lasers, sonic waves and big bad bullets.

When the screen gets very busy there is a little slowdown but nothing too drastic. The music is also rousing, the sound effects exciting, and the missions quite varied. One moment you will be blowing up key targets, the next, stealthily avoiding searchlights. Each assignment also has a separate side mission that adds some replayability, and there are a diverse assortment of twelve end-of-level baddies that require your attention.

It is when you encounter these boss battles that the touch controls really begin to creak under the strain. The impreciseness of manoeuvring around the screen begins to seriously hamper progress, and send blood-pressure soaring. Thumbs slip off fire buttons and fingers obscure your view of the action. If your trigger finger has seen better days, then the only option is to revisit earlier levels to gain more experience for skills. 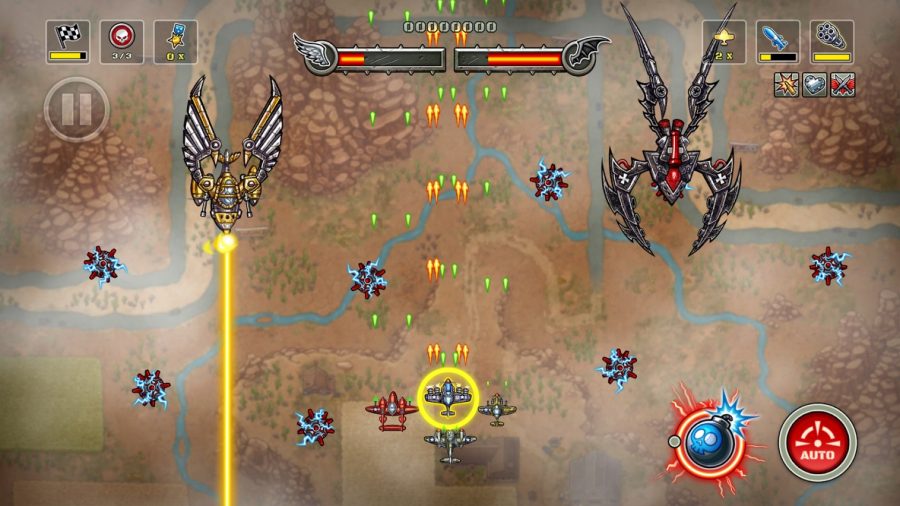 With a total of 50 levels to battle through, the amount of content is hard to argue with. It is just a pity that the additional Nebelgeschwader campaign doesn’t introduce anything significantly new. It is fun to play through the game from a different perspective, but ultimately both campaigns feel disappointingly similar.

The PC version had a crazy four-player co-op mode that unquestionably turned up the enjoyment quota. Here, you are forced to rely on your computer-controlled wingmen. Wingmen can be given limited commands to determine their thresholds for triggering special powers, and the effort has been made to instil each pilot with their own personality. Unfortunately, it is never going to capture the feeling of playing with real people.

Aces of the Luftwaffe is an admirable attempt at more than your standard arcade shooter. It is a game that doesn’t take itself too seriously, with a pulpy storyline, and over the top characters. Nevertheless, the upgradable skill trees, and squadron-based gameplay ensure that there is a serious challenge lurking beneath the light-hearted exterior.

Aces of the Luftwaffe

Despite a couple of questionable design decisions, this is still a solid arcade shooter that offers hours of entertainment.