I have long wanted to delve into the streets of Akihabara, and so desperately wanted to lose myself in the bizarre story of Akiba’s Trip: Hellbound and Debriefed. Unfortunately, I found I had scaled my expectations a little too high.

The Akiba’s Trip series, despite being somewhat niche, has become quite iconic for its odd core mechanic and satirical view of Otaku culture. Having watched from afar for years, I was excited to hear Akiba’s Trip: Hellbound and Debriefed was getting a HD release on Switch. As someone who has dabbled in the world of the Otakus for a long time, and having gone to many anime and gaming conventions, I like to think I have a pretty open mind and am able to take a crude joke (or five) in my stride, so this odd little title seemed right up my street.

The game is based around an odd plot, in which blood souls (pretty much vampires) hide amongst humans in plain sight. As a Blade-esque human-vampire hybrid, it is your job to hunt out these vamps and stop their bloodsucking reign – but how? Well, by beating their clothes off them so they combust in the sun, of course. This novel but often flawed concept requires a good ability to suspend disbelief (how are they totally fine in nothing but a hairband? Why do their socks not count as protection? These questions haunt me at night) but if you can get past the finer details, it is definitely good for a chuckle now and then.

Considering it wasn’t originally written in English, the humour and slang translates well. Central characters provide entertaining parodies of stereotypes, and there are some real quirky gems in the form of missions and side quests. The story, however, often flounders. I found myself disinterested in many of the conversations and cutscenes, and the Pitter messages became tedious to trawl through, especially without real names or faces to remind you who was speaking. The satirical themes are definitely entertaining, but sometimes a hyper-focus on self-awareness almost loops back around to what you are criticizing. 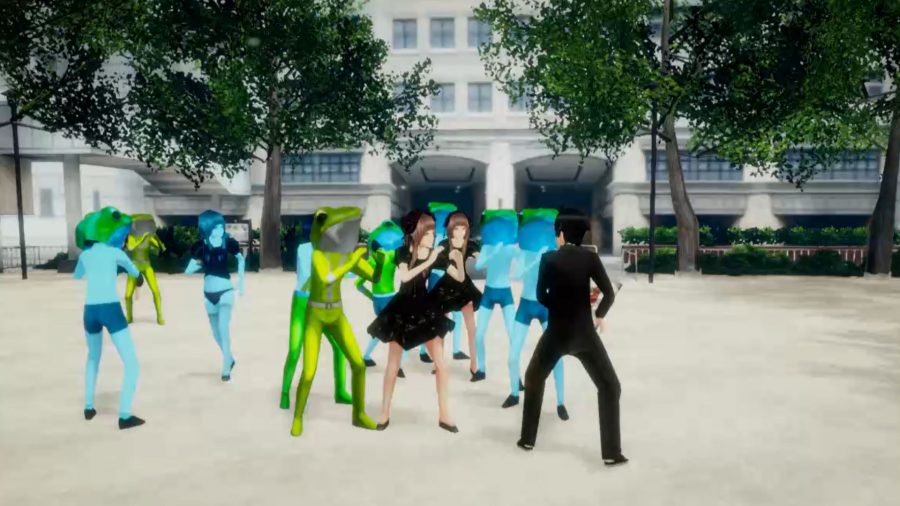 As the core focus of the game, combat is very clunky and leaves a lot to be desired. Sorely missing a lock on and the ability to control your camera while fighting, you are entirely at the mercy of whichever random direction your character wants to swing. So much as touching the joystick or attempting to do a special attack will leave you openly swinging at the air while your enemies knock you to the ground. With high, mid, and low attacks, you often find yourself spamming one button then making a grab and hoping for the best.

The camera is extremely erratic, especially in tight alleyways (which make up the majority of the game) where you often end up staring at a tree, or glitching through a wall, rather than focusing on the battle at hand. It’s a pity, as the novel concept and minibosses have a great deal of potential, and would be vastly improved with a simple lock on function, or allowing you to control the camera while in combat. And to add insult to injury, if you’re battling and a police officer happens to stroll by, you will, without fail, get booked and fined – even if you weren’t the one who started the fight, and the enemy is an actual vampire. 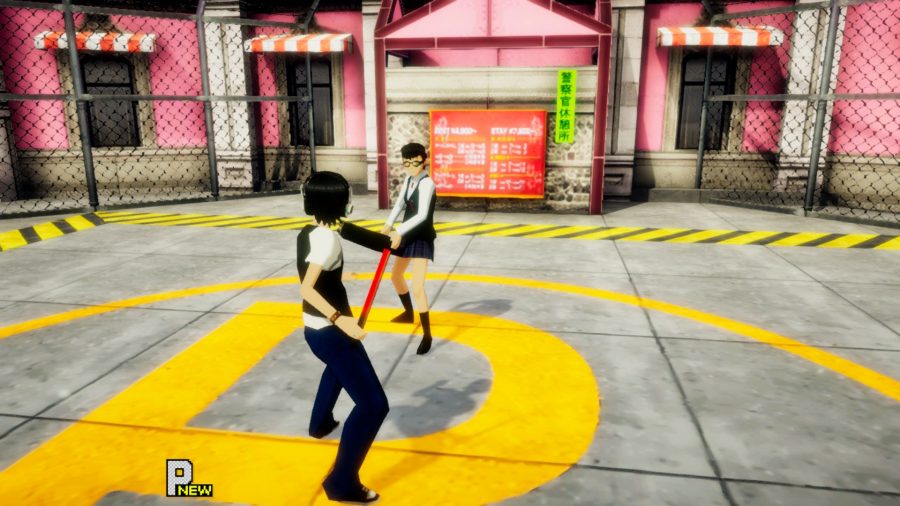 Playing this game during the colossal heatwave that has swept over the UK was quite a fitting experience. It definitely simulates the feel of a sunny afternoon in summer, from its bright, clear skies to its aggressive lens flare and bloom filters. Despite its technical prowess back in the PSP days, Akiba does not translate well onto the big screen in docked mode, or even on a handheld Switch for that matter. Characters are blocky and angular, textures are blurred, and scenes are overexposed.

Streets are heavily populated with the same handful of character models that go from making the game feel busy and alive to empty and repetitive quite quickly. This is most noticeable in cutscenes, where a crowd of ten people is made up of only two models cloned over and over, with even their movement identical and often synchronised. Of course, this is a limitation of the game’s age, but the price is pretty steep for what you get. A little bit of polish would definitely be welcome. 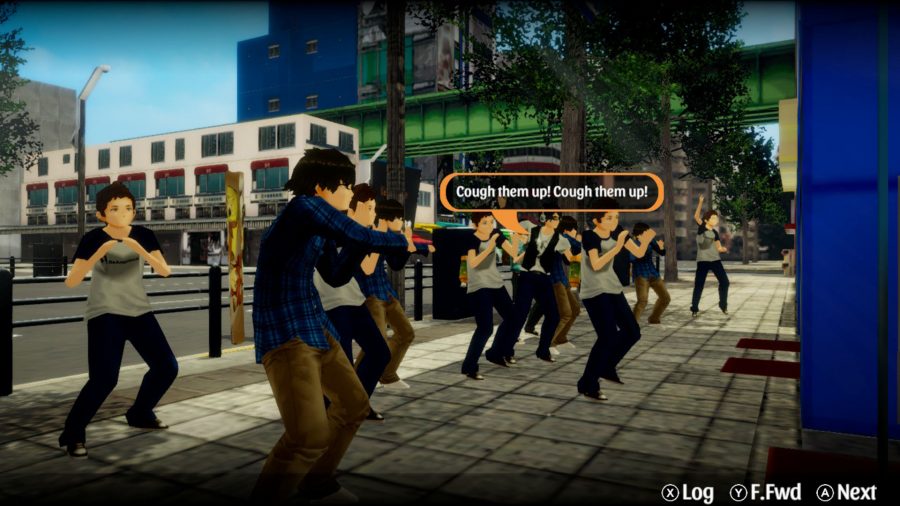 Frame rate is another big issue. I found the game chugging terribly when entering battles with more than two enemies, which, as you progress through the game, becomes more and more common.

Specifically, in a side mission where you are sent to strip 30 frog henchmen, the game was completely unplayable in docked mode, reaching frame rates lower than 15fps. I resorted to playing it handheld, which did remedy it to an extent, but I still found myself having to flee and run around the map occasionally to allow the game (and my eyes) to catch up.

These problems aren’t limited to large fights, either. As the camera snaps around frantically during battle, especially when you do multiple strip combos, you sometimes hit lag spikes and frame rate drops that make battles even more frustrating than they already were. 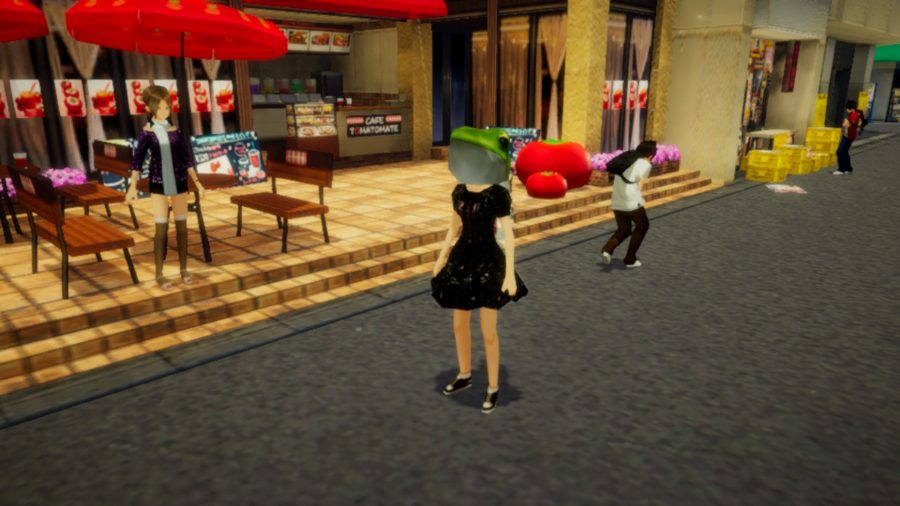 The collectible costumes and weapons do provide plenty of fun though. As you’d expect, it’s a slog to find anything decent early in the game, but after picking up a couple of ‘how to strip’ guides sold at your local store, you’ll be a frog in a suit beating things with your moe body pillow in no time, which never fails to get a giggle.

Now to address the elephant in the room. The actual… mature themes of the game. There are many kinks in this game, and they are worn as a badge of honour, which can definitely be read as humorous when taken with a pinch of salt. As said above, I’m far from shy when it comes to these topics and have been around the block a few times, but there are some situations you are placed in that can make for some uncomfortable moments. 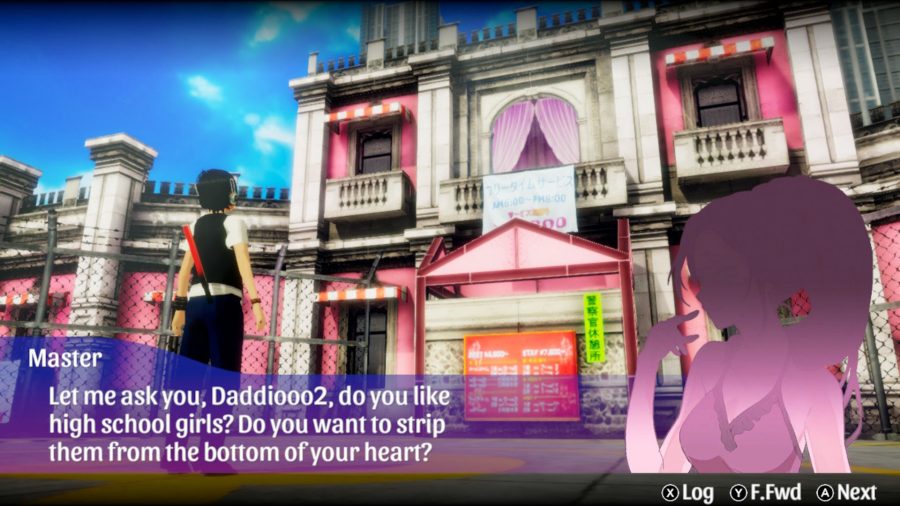 One of which is when you pay your younger sister to dress in a school uniform in order to ‘understand the charm’ of the outfit, after some dialogue with the Master about virginity and sexual maturity. There is a fine line between satire and inappropriateness, and this game definitely toes it. So if you’re sensitive to these types of themes, maybe give this one a skip.

Akiba’s Trip: Hellbound and Debriefed on Switch is an odd little title with some really unique and interesting ideas, but overall falls short with its visuals, combat, and clunky controls.