Alba doesn’t merely walk around the sunny island of Pinar Del Mar – she skips, occasionally spreading her arms wide and running like an aeroplane. She stars in Alba: A Wildlife Adventure, a similarly joyful ode to nature. You lose track of time scanning the island’s beautiful and varied wildlife with your smartphone, using these reference pictures to restore neglected birdwatching signs and make new friends.

However, it’s surprisingly gut-wrenching when you first come across an animal lying on the ground, made sick by a careless farmer spraying pesticides. You feel outraged and compelled to act, healing the poor creature with a first-aid kit loaned to Alba by the local vet. With a mere tap, the animal leaps up in a puff of smoke and bounds away cheerfully. You really feel like you’ve done something, like you’ve made a difference.

Alba’s developer, Ustwo Games, the renowned studio known for titles like Monument Valley and Assemble with Care, hope that this might inspire you to take action in the real world too.

“We wanted to keep the message very positive, tell people that you can do it. If you do your part, and everyone does, then we’re good,” says Alba’s creative director, David Fernández Huerta, over Zoom. “It doesn’t need to be about saving the world on a massive scale, it’s more about the everyday actions.”

The idea for Alba came about when Huerta and lead programmer Manesh Mistry were working on a prototype for a time-travelling puzzle game. Huerta was stuck and longed to work on something a bit less complicated. He grew up with a love for nature documentaries and inherited his passion for birdwatching from his father, who gave him his old DSLR camera.

Huerta worked on the prototype alongside Ustwo developer Kirsty Keatch. Both grew up near the Mediterranean coast in Spain.

“The idea of the game was something very simple, just free-roaming, taking pictures of animals,” Huerta says. “We have this world in common… so it was easy for us to come up with locations and, very quickly, it became something that felt authentic.” 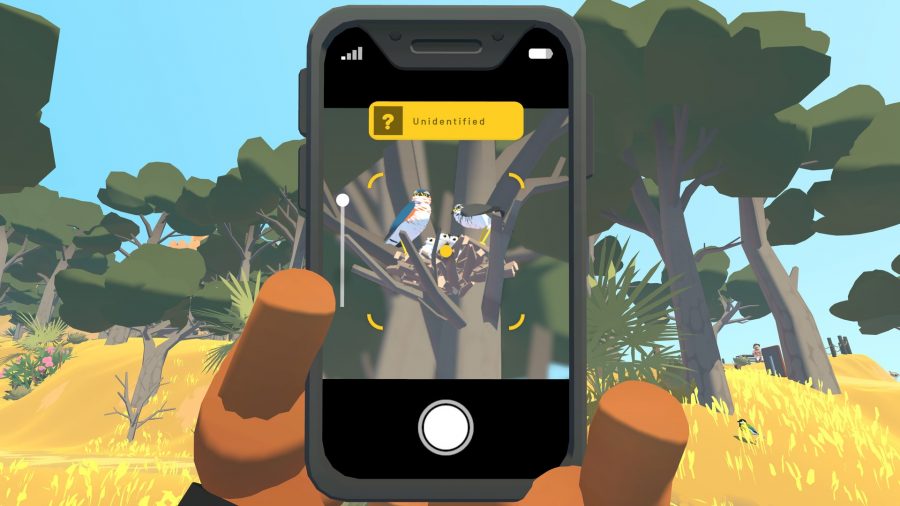 The core development team at Ustwo Games working on Alba numbered around 16 people, increasing to 25 in the last six months before its release, according to Huerta. They wanted to create a meaningful experience so decided to focus on their shared love of the natural world.

Alba delivers on this mission statement within ten minutes of booting up. After barely touching down on the island to stay with her grandparents, Alba teams up with her friend Inés to rescue a beached dolphin trapped in a net, convinces a group of adults to help them, and promptly forms the “AIWRL”, or ‘Alba and Inés Wildlife Rescue League’.

Nearly every action the player performs is positive and directly benefits the environment, from picking up rubbish to repairing a broken fence. The main story even sees Alba petitioning support to protest the development of a hotel on top of a nature reserve. These actions often translate into simple screen-taps followed near instantaneously by a playful animation, like a white love heart popping out of a pile of neatly-folded towels, or a bird nestling into a newly-refurbished bird box.

“One of our pillars was this freedom and sense of childhood. When you’re a kid, you understand time in a different way, it seems like you expect action and reaction to follow immediately,” Huerta says. “You tap on a thing and it happens. Not having convoluted workarounds… it gave us that freedom as game designers to create an experience that doesn’t feel like it’s too serious, but it’s talking about meaningful things.” 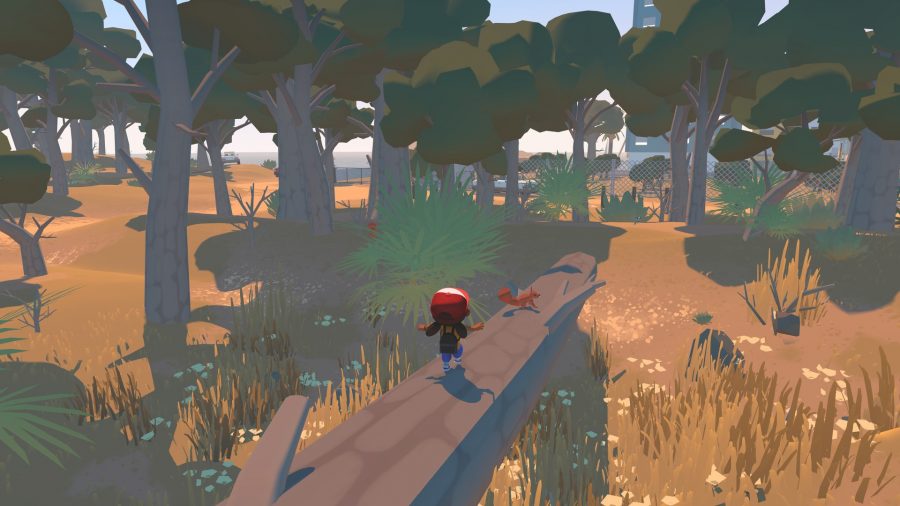 Having a young protagonist also allowed Ustwo to tackle difficult environmental themes in a way that felt authentic.

“If you make it about a girl that is ten years old, of course she is gonna be passionate about this message, but if you do it about an adult that is knocking on every door, trying to get this petition signed, that’s when it starts to kind-of scratch a bit,” Huerta explains.

These themes are reflected in the lives of Alba’s developers themselves. Mistry attempts to lead a zero-waste lifestyle with his wife, while Huerta’s family has a “very environmentally conscious home” and has tried to incorporate vegetarianism and veganism into their lives.

Ustwo Games, meanwhile, are a founding partner of the environmental campaign Count Us In, have partnered with Ecologi to plant one tree for every copy of Alba downloaded, and is a member of the Playing for the Planet Alliance. Ustwo is also registered as a B Corporation, signifying the “highest standards of verified social and environmental performance, public transparency, and legal accountability”.

Huerta was initially concerned that the game would come across as “preachy” or educational and wanted to make it as true to life as possible. For example, a mysterious fire breaks out in the island’s nature reserve, coincidentally located near the planned hotel development site. This was inspired by stories David heard growing up in Spain about ‘accidental’ fires clearing out forests to make way for building sites.

“We aren’t picking contrived situations or contrived locations – these are things that really happen,” Mistry, Alba’s Lead Programmer, says over Zoom. “Because of that, there’s an authenticity in there that you can’t really fake.” 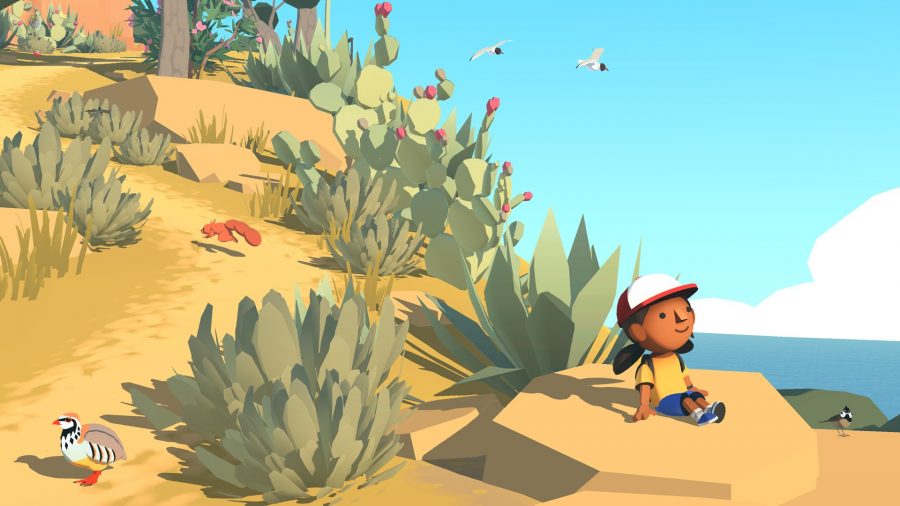 This desire for authenticity also informed the complexity of Alba’s diverse characters in narrative designer Georg Backer’s storyline – not everyone is completely against the idea of the hotel, for example. It was also the philosophy that governed the creation of Alba’s wonderfully varied and lifelike animals, mostly based on concept art drawn by Huerta. For example, Mistry points to the game’s soundscape, where every animal noise is generated by an actual animal located somewhere on the island that you can track down.

“From the outset, we knew that we wanted to target more realistic animals as opposed to fantastical things, because the real world is already awesome and fantastic, and we don’t need to add any of our own secret sauce onto that,” Mistry says.

Overall, Huerta hopes that players are inspired by Alba’s childlike sense of optimism, where “everything is possible, cause I haven’t seen it not being possible”.

“You can take someone who just enjoys running around this chill world… if that’s what they take from it, perfect, that’s great. But then you can keep going deeper,” Mistry says. “You can go all the way down to somebody who actually goes ahead and they change parts of their life because of this, they say: right, well I need to take care of the environment, what can I actively do?”

“I feel like it had every single one of those layers. If someone’s coming away from it with that interpretation, then I’m very happy that we did our job”.

You can find Alba: A Wildlife Adventure on Apple Arcade and Steam.