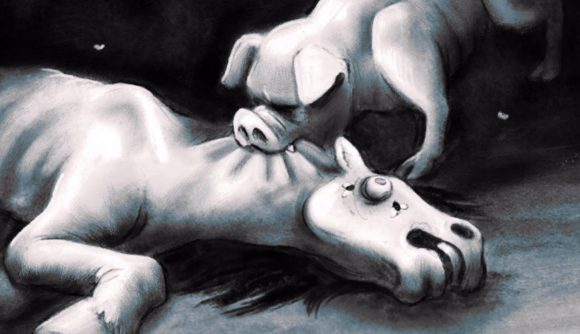 All games are equal, but some games are more equal than others. Nerial, the developers of the Reigns series, and The Dairymen have announced the release date of George Orwell’s Animal Farm – December 10. In this adventure game, your choices will determine the fates of all the animals on the farm. Having to balance the farm’s resources while ensuring everyone is protected, and having to keep everyone happy is no easy task.

Narrated by Abubakar Salim, most well-known for voicing Bayek in Assassin’s Creed: Origins, Animal Farm’s story contains eight unique endings for you to explore. You’ll have to choose between three political machinations: Surveillance, Reeducation, or Bloodbaths, each introducing drastically different storylines. No matter how well-intentioned your choices are, someone ultimately has to pay the price for your decisions.

If you haven’t had the chance to read Orwell’s Animal Farm, this may be an interesting way to experience the classic allegorical novella. Created with the blessing of the Orwell estate, Animal Farm aims to show the corrupting nature of power. Looking at the current world events going on, Animal Farm hits closer to home than you’d expect from a 75 year-old story.

“I have long wanted to explore how, through video gaming, we could design an experience which immerses the player in Orwell’s vision,” says Imre Jele, the project founder of Animal Farm. “As the project has come to fruition in 2020 it has felt increasingly vital to bring Orwell’s study of inequity, power and control to a new audience.”

We are excited to confirm that Orwell's Animal Farm will be released on the 10th of December on PC and mobile.

Though the publishers haven’t outlined precisely which mobile devices Animal Farm is heading to, it’s almost a safe bet to assume the game is coming to Android and iOS devices. If you’re looking for something a little more light-hearted, why not check out our best mobile strategy games list? These games will help to scratch that tactical itch you may be feeling.