Can you diagnose someone’s troubles by looking at the stars? Probably not, right? But wouldn’t it be useful if all worldly problems could be solved just by looking up and reading a solution in the sky, plain as day. Well, apparently someone did think that. Elizabethan astrologer, occultist, and ‘doctor’ Simon Forman apparently used the stars to divine a cure for himself, and others, for the plague that was ravaging London in 1592.

Astrologaster is based on the story of Forman’s career, in which he used astrology to diagnose patients, but also make predictions in regards to their love lives, their financial investments, and their personal affairs. It’s a slippery slope that sees you play god, balancing between telling patients the truth and what they want to hear.

But Astrologaster isn’t an overly serious game. It was made in partnership with historians at the University of Cambridge, but it takes some liberties with the subject matter. As Forman, you’ll diagnose famous figures from the period such as the Earl of Essex, Robert Devereux, writer Emilia Lanier, and the Archbishop of Canterbury, John Whitgift. It’s a fun journey that sees you more than a little embroiled in important historical events.

In terms of how Astrologaster actually plays, the game is essentially an interactive pop-up storybook, as you flip pages to reveal new patients – or ‘querents’, as they are known in ye olde speak – and do your best to solve their troubles. Each patient explains their problem to Forman, and you must choose which you think best fits from a selection of star readings. Different star signs have different implications, after all, and you use these to offer an appropriate solution.

If you choose correctly, your patient becomes more likely to offer a letter of recommendation. The central goal of the game is to obtain five of these letters, allowing Forman to finally gain a medical license and cast off his infamous reputation. It’s a fun formula, one that makes you feel like a real con-man as you try to connect the dots in the stars to advise patients. But it’s a balancing act: if you straight up lie to a patient they might return later, angrily wondering why your prediction was wrong. But on the other hand, if you tell a patient a hard truth, they might get angry right then and there. 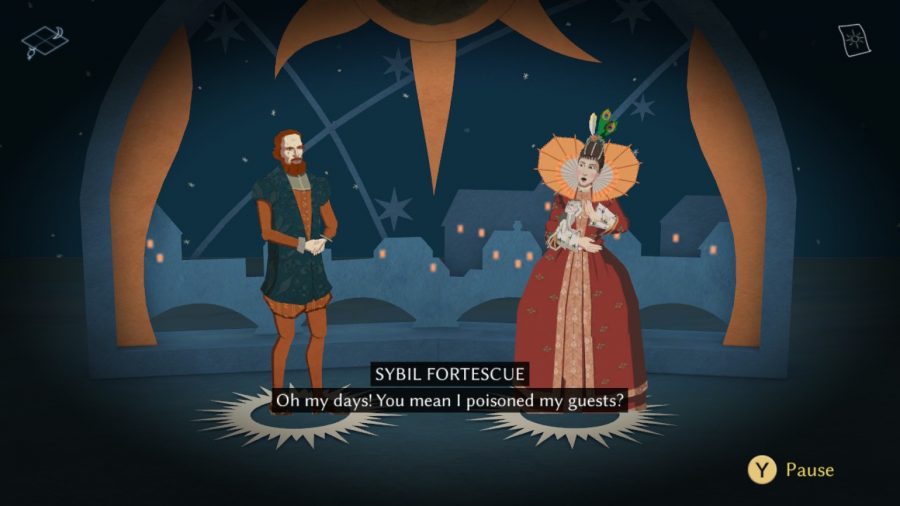 The game itself is also wonderfully produced. The backgrounds and pop-up paper characters fit the storybook aesthetic perfectly, but also make it seem dramatic and almost pantomime-ish at times, which is in line with the game’s bawdy sense of humour. Another great element is the choir who sing verses to introduce each new patient. These are often hilarious, especially as patients return to see Forman, and the verses change to describe their problems. Whether it’s a lady of high society or a hypochondriac merchant, the choir adds a little period element of funny characterisation.

Much of the game’s humour is derived from Forman’s relationships with his patients, and how he gets involved in their problems and major historical events. On the whole, Astrologaster is silly and very reminiscent of Blackadder, casting Forman as the – somewhat – straight man surrounded by a cast of over-the-top characters. But it does sometimes hit a serious note, and I found myself surprised at the sudden tonal shift that the game accomplished. 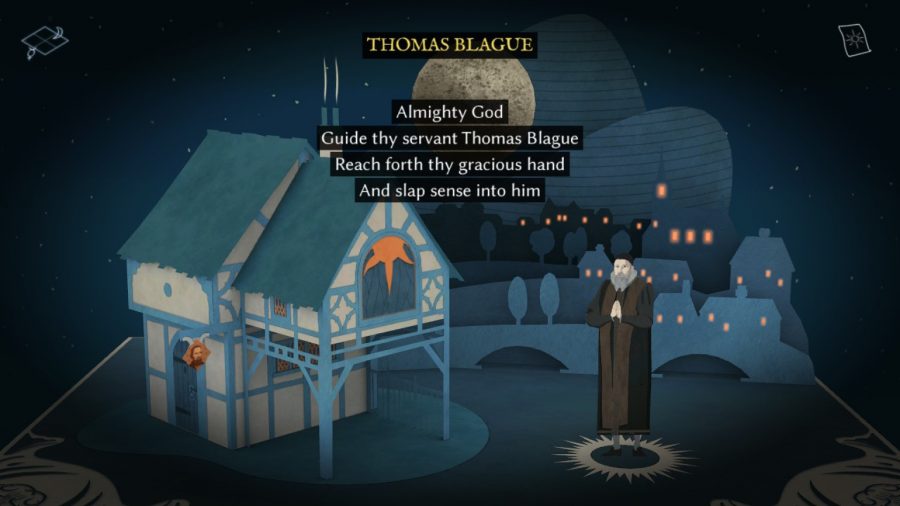 There are some downsides to Astrologaster, though. The game is fairly short, running to six hours, and while I do think it feels very complete, I know some people might consider that small. I think your input is fairly limited as well, considering the only element of gameplay is the choice of star-sign when giving patients their readings. Astrologaster relies more on its humour and characters than its gameplay, but if you’re not really into that Blackadder style of period comedy it might start to feel like a bit of a drag.

Still, the game is a fun historical exploration that doesn’t take itself too seriously, deriving a good deal of its humour and absurdity from how it deals with the central concept of using stars to diagnose all worldly ills. Though it takes liberties with the subject matter, Astrologaster is a great afternoon of fun for any history or interactive story fan.

Though of specific interest, Astrologaster is a fun story about people looking to the heavens to avoid facing what's right in front of them