The term Metroidvania is fairly ubiquitous nowadays, with the action/platforming genre being represented incredibly well with huge releases like Hollow Knight, the Ori games, and even smaller titles like Blasphemous to name just a few. What Axiom Verge managed though, was an almost perfect distillation of the Metroid side of that portmanteau, but with an interesting modern twist.

So, if Super Metroid was the long-awaited evolution of Metroid, Axiom Verge 2 is a similar leap forward for the series, but one that takes a lot of creative chances to draw a distinct line between its predecessor, while also expanding the lore of the original. That is to say, not everyone who enjoyed Axiom Verge will enjoy its sequel, but that just might be the point.

With a markedly different combat system, and swapping the dingy labyrinths of its predecessor for a lush, almost Babylonian aesthetic, Axiom Verge 2 is an impressive evolution of the original but also a smart step into untouched territory for the series which could set the path for a long, interesting future. Finally, it’s also another mammoth achievement for lone developer Thomas Happ.

Playing as Indra, a billionaire tech CEO on the hunt for her missing daughter, you’re drawn to a facility in Antarctica that holds a secret, a portal to another world. Soon you’re sucked into this other dimension, with hostile machines out to get you, and abilities are hidden around its vast map. So far, so Metroidvania. But like the original, Axiom Verge 2 hides a lot of secrets in both its story and world, and pushes the series forward with hugely satisfying abilities that warp the world and technology around you. 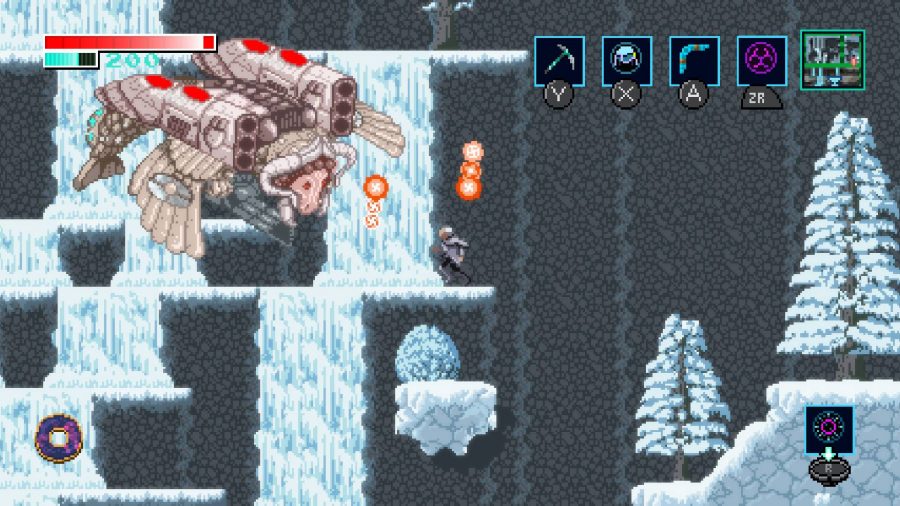 The biggest immediate difference for anyone who played the original is the combat. Instead of starting with a gun that you expand with different abilities, Indra starts with a pickaxe that only facilitates close-quarters combat. You get a boomerang shortly afterwards, but it’s nowhere near as effective, so it’s not a replacement. This makes combat more dangerous, and these enemies are tough as well. The title’s many drones will chase you as soon as you’re spotted, fire off numerous projectiles, and hound you out of each tile of the map.

I mentioned Super Metroid earlier, but the change in combat might be closer to the difference between Dark Souls and Bloodborne. Moving from a defensive and distance orientated combat system, to something much more demanding and personal. Enemies feel more dangerous because of this, but so does Indra. While you do earn new abilities, the game quickly teaches you to either pay attention to enemies and attack them properly, or make smart use of your other options like the boomerang and hacking. It’s a frustrating shift, but one that I think is ultimately worth the effort, as I enjoyed the combat of Axiom Verge 2 much more than the first entry, eventually. 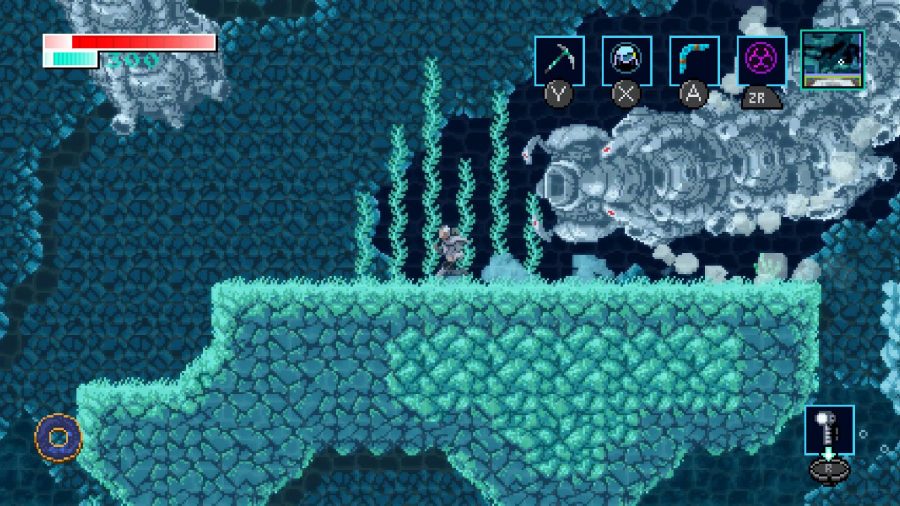 Mercifully, you unlock hacking early on, and you can upgrade your attacks with ability points to make them more effective. However, my first moments in Axiom Verge 2 felt like my first night in Minecraft, scrambling to different corners of the map just hoping to find anything useful, before retreating out of fear of dying or being sent back when an enemy finished me off. This made the power creep very satisfying, however, as there are plenty of fantastic additions to your arsenal to discover in hidden nooks and crannies.
Also, those ability points do a good job of rewarding exploration in every inch of the map. This is definitely not a linear game, with a wide-open map that gently nudges you in certain directions but also allows you to explore. While you will have to get certain items to progress, after a few upgrades you will have the ability to search almost any corner of the map, so even if you’re lost, it feels like you’re moving forward. The ability points increase the effectiveness of attacks and items, so even if you haven’t unlocked the next big item, you’re still slowly improving and it feels very rewarding.

I enjoyed the combat of Axiom Verge 2 much more than the first entry, eventually

Those initial hours are still stifling, however, and while later items assist exploration, including the much-needed ability to fast travel between save points, it’s a slog to begin with. The combat is tough to get to grips with, and I found myself sorely missing the guns of Axiom Verge. It only took a few hours to get a decent enough upgrade to the main weapon, put some skill points into the boomerang and change how I approach things, but it’s never fun to have to struggle through an opening to get to the good stuff.

One thing that’s consistent though, is the beautiful design of the world in Axiom Verge 2. The luscious environments are a far cry from the cramped, crushing technology of the previous entry. It helps to make Indra feel like an explorer in a brave new world, and without going into spoiler territory, there are still some darker environments to discover as you plumb the depths of the map. The drones and enemies have a matching aesthetic of Aztec or statue-esque design that fits the setting, though I was fighting way more drones than I expected. Some of the room-filling enemies and bosses are so impressive, I can’t help but question why you spend so much time battling small scorpion shaped robots. 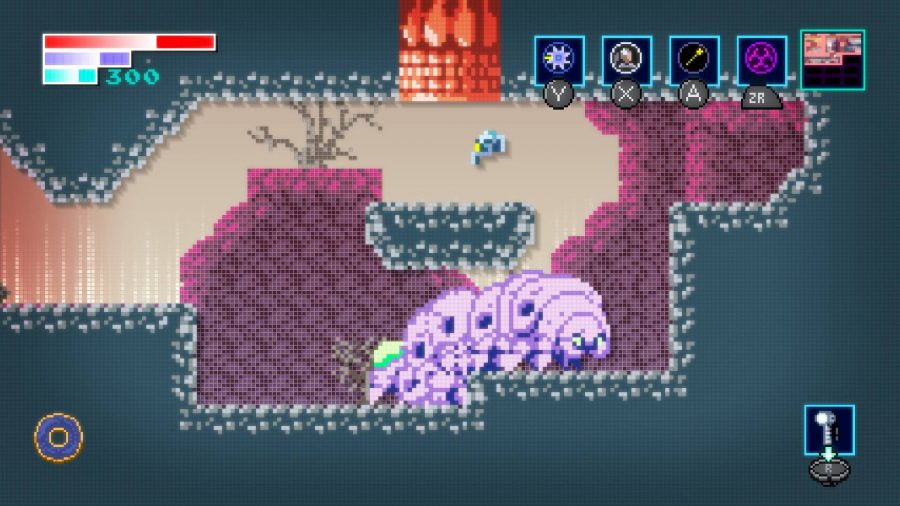 From an audio standpoint, Axiom Verge also impresses, with the soundtrack using a similar focus on warped and haunting vocal howls to give an ethereal, and darkly technological feeling to its tracks. The shrill lasers of enemies and the satisfying wave of noise from explosives, along with the many other items, all fit perfectly into the game’s world. The sound effects, amongst many other aspects, once again remind you what a marvel this title is when it’s been mostly programmed by the singular developer Thomas Happ.

Axiom Verge 2 is a confident and creative step away from its predecessor, and it mostly pulls that off with aplomb. Combat can feel like a step backwards as you often feel powerless, but it forces you to interact with the world and your abilities in more clever ways. Meanwhile, the gorgeously detailed pixel art does a fantastic job at bringing both the world and enemies to life, making every square of this map a joy to explore.

While a tough opening was a rough adjustment, and a bit more enemy variety would have been appreciated, Axiom Verge 2 eventually opens up into a satisfying and thrilling game that successfully carries the legacy of the outstanding original entry.