Bad North has a comically understated name and ‘tastefully’ understated gameplay to match. It manages to be as interesting as possible while remaining extremely simple, or rather, clear-cut. Moving ever eastward, the player sends groups of nordic soldiers to islands to escape an encroaching hoard. As they move along, rewards will bulk up the makeshift army with reinforcements, equipment, and veterancy upgrades.

This is a short campaign with roguelike elements (if you like that sort of thing, check out our list of the best mobile roguelikes) and it strikes a nice balance between duration and progression. The real-time with pause control scheme is brisk yet effortless, and the replayability is fair. While not entirely novel, the game is extremely refined and well-balanced. It’s a real keeper with staying power.

As a style philosophy, minimalism means maximum engagement; nothing comes between the individual and the pure experience. Bad North is minimal because it presents itself as directly to the player as possible, with little extra narration or theme, simple readable graphics and design. More than anything, the combat is easy to navigate and understand. Waves of invaders land on the shores and move to raze the buildings and their inhabitants.

Your forces play defence, scuttling from space to space to slay the invaders before this happens. Each island is procedurally generated, with a unique mixture of terrain, enemy composition, and potential rewards. Your rag-tag band of soldiers will be built up provisionally; roguelikes are about assembly and flexibility as much as hardcore strategy.

To spice things up, there are archers, pikemen, and swordsmen as unit classes, and a smattering of active abilities. Each has its place, both in the heat of battle and also as part of a larger campaign strategy. Archers excel at range, pikemen from a stationary position, and swordsmen as jack-of-all-trades. The enemies come in analogous forms, as well as some beefy mini-boss types and meatshields. What you see is what you get; no real numbers or stats obscure combat, so watching the action become the primary source of intel and feedback. It’s liberating.

If you’re a fan of tactical experiences, check out our list of the best mobile strategy games for more of them.

The game also scales incredibly smoothly. It has three difficulty settings initially, along with an unlockable very hard setting for the masochists. Additionally, the challenge of the islands ramps up at such a goldilocks pace, throwing out perks and curveballs with equal measure. A given island will only take a few minutes to clear, but these pebbles build up to a mountain of a campaign. It makes me nostalgic for the bygone era of well-made Flash games you could play on the web.

Bad North has that same sense of flow as FTL or Binding of Isaac, with the nagging urge to just push things a little further. Stretching forces thin when island-hopping gets more loot, because commanders must recharge after a fight. Once a fifth commander joins, or one gets a jug letting it fight every turn without pause, the player can try to snap up smaller islands on off-turns by deliberately using a smaller fighting force. The encroaching fleet only advances when the player pauses to let their troops, recharge, see, so you can effectively move twice with a little luck. Suffice to say there are edge cases where the player can take on extra risks for a little boost. 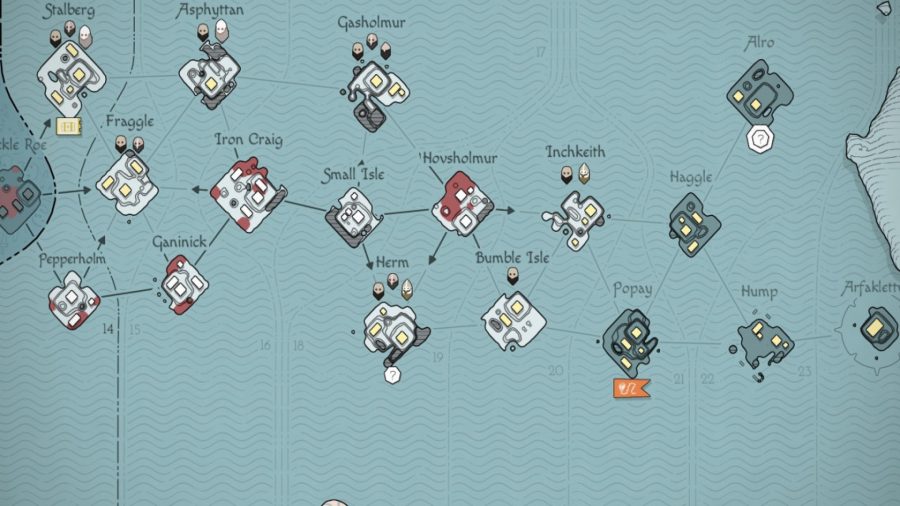 90% of this game’s fun factor come from the attention paid to its balance and pacing. The gameplay is good but, let’s be honest, hardly groundbreaking. All these disparate elements combine to offer a game that is decently challenging but feels breezy. Casual, even. The hard modes just means turning up the heat; changing the difficulty through degree and not by introducing new mechanics. It makes the acceptable margins of performance narrower, demanding the same skill set turned up to eleven. ‘Harder’ just means utilizing better technique, not really finding creative solutions.

The game is direct to a fault. The movement and terrain are easy to assess at a glance, and if anything they are too forgiving. Still, theirs is a subtle influence. The travel time and pathing sometimes create chokepoints which archers can exploit. If the troops are too close to a landing party they get stunned by the boat’s impact. The Archer’s range is contingent on elevation, so a high perch means unilateral firing power. Larger houses heal troops to full health faster. These small flourishes of mechanics are all the game has to offer. All this is just to say that micromanaging the units second-by-second is pretty much mandatory beyond a certain point. 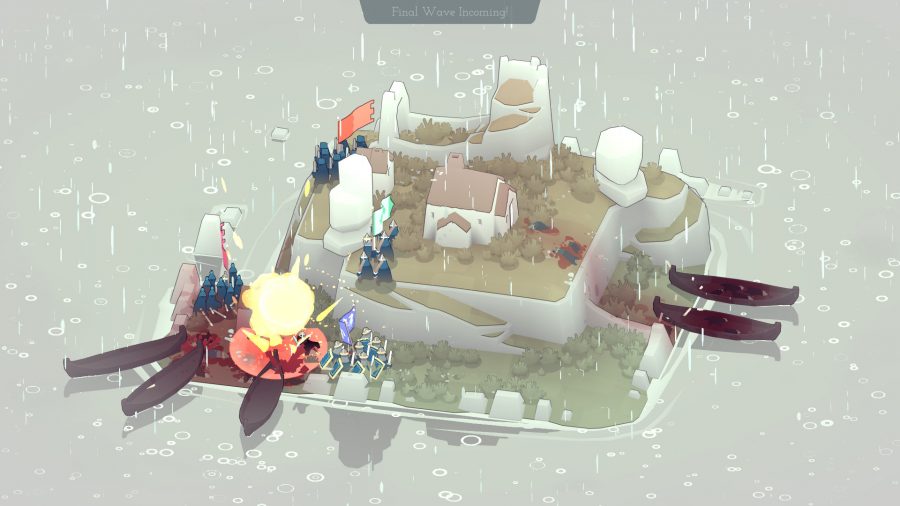 Now for the caveat emptor. This is a very buggy release, at least by my reckoning. There are fairly common reports of unfixable crashes and fail states which ruin runs part of the way through. It appears to be something where the system gets stuck on a particular island generation and just cannot load it. Oh, and I witnessed some broken textures. Because the most common bug often makes the game unplayable past a certain point, everyone needs to wait until they patch this sucker out. I finished a campaign in around three hours but also had to abandon some.

Bad North is a gorgeous and chill game. Strangely enough for a game about the bleak, inhospitable north, it would make a perfect game paired with a leisurely vacation somewhere indolent and sunny. The matches are short and the campaign is only medium-length. It taxes the fingers more than the gray matter, honestly. It wears its influences smartly, and polishes more than it innovates, but is still an engaging and thoughtful experience. Unfortunately, the buggy release state and slight repetitiveness of additional runs mean that Bad North has gone south. Visit it again before the Solstice and I do believe it will be excellent once more.

Minimalist real-time strategy presented in a pure, direct fashion. Challenging, not too complicated, and is great while it lasts (pending bug-fixes).