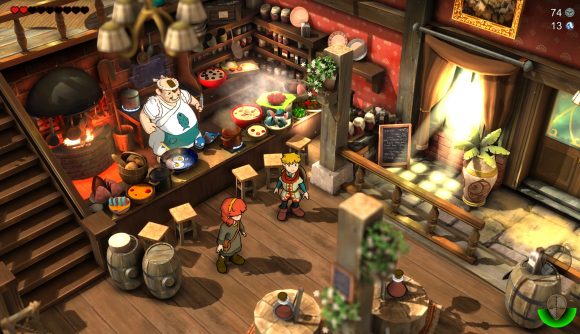 Initially revealed in a Nintendo Indie World presentation, the Studio Ghibli and Legend of Zelda-inspired indie game Baldo: The Guardian Owls finally has a release date. Developer Naps Team announced its August 27 launch on Switch, PS4, Xbox, and Apple Arcade along with a new trailer yesterday.

Baldo is an action RPG that sees you playing as the titular Baldo as you explore a fantasy world filled with challenging puzzles and intricate dungeons. With its beautiful and vivid visuals as well as charming character designs, it’s very clear that titles like Princess Mononoke, Spirited Away, and other Studio Ghibli classics have heavily informed the development of this gorgeous game.

There’s no shortage of Ghibli inspired games on Switch, with the already released Ni No Kuni, which was actually developed with Studio Ghibli, and its sequel Ni No Kuni II arriving on Switch this September. Not to mention the heavy influence of Ghibli on The Legend Of Zelda: Breath Of The Wild. Seriously, it’s basically Princess Mononoke the game.

If you want to know more about Baldo, the Steam page description reads:

“Traverse this captivating open world as Baldo, and meet a host of quirky and unforgettable characters, as you struggle to decipher the cryptic prophecy, and thwart destiny.

From delightful whimsy to thrilling adventure, discover new towns and their distinctive inhabitants, fight ferocious foes, locate hidden temples, and collect objects both magical and mundane to obtain powerful new weapons, or to help unveil the myriad secrets of this strange land.”

Nintendo Switch owners and Apple Arcade users don’t have long to wait until the August 27 release date, but in the meantime why not get your Ghibli fix with Breath Of The Wild, and use our Breath Of The Wild amiibo guide to know exactly which plastic figures to tap.