Beholder 2 is nothing if not ambitious, even from the get-go. Its opening scene sets the stage for a cinematic tragedy that springs the plot into motion. Evan Redgrave, the distant son of a prominent Ministry official, comes to fill a post at the shadowy Ministry and discover the truth of his father’s legacy. To get to that grand, juicy finale, though, he has to move up the corporate ladder while paying rent and maintaining a patriotic facade. It’s a story-driven dystopian game about the soul-crushing drudgery of the daily grind and bureaucratic evils. So, yes, the black-and-white scheme here might look like a moral frame, too, and not just an aesthetic one.

Beholder 2 is a marked improvement on its predecessor but its wonky control scheme and unpredictable tone make for a diminished experience. The first game played out like Rear Window writ large, with more gadgets. It had a claustrophobic feeling, with constant surveillance of your neighbors being mandatory for pure survival.

You had to try to feed your kids, satisfy your wife, and grow close to the neighbors; all while pleasing the State and its constant demands for intel. From a mechanics standpoint, the constant real-time clock made the game feel like a real bummer. Survival got in the way of story immersion. Well, the sequel has a totally new approach. First of all, ‘time’ is a discrete resource spent on tasks, so the game has become a management sim rather than a frantic click-fest.

The other big change is the location and camera. Beholder 2 is now populated with scenes and people in serviceable 3D, though its 2.5D environment is still a matter of shuffling back and forth linearly. It uses some tricks of perspective and depth to make the building seem like one endless slab. To earn money and authority, you need to excel at both Evan’s day-job, listening to citizen concerns and filing the pertinent paperwork to refer them to the proper authorities, as well as the various side-quests and tricks used to generate authority. It’s technical enough to be thought-intensive, but the demands are all mundane and run the gamut from existential to trifling.

Oh, and your work-buddies are rife with their own insecurities and weaknesses, which Beholder 2 encourages you to exploit for personal gain. 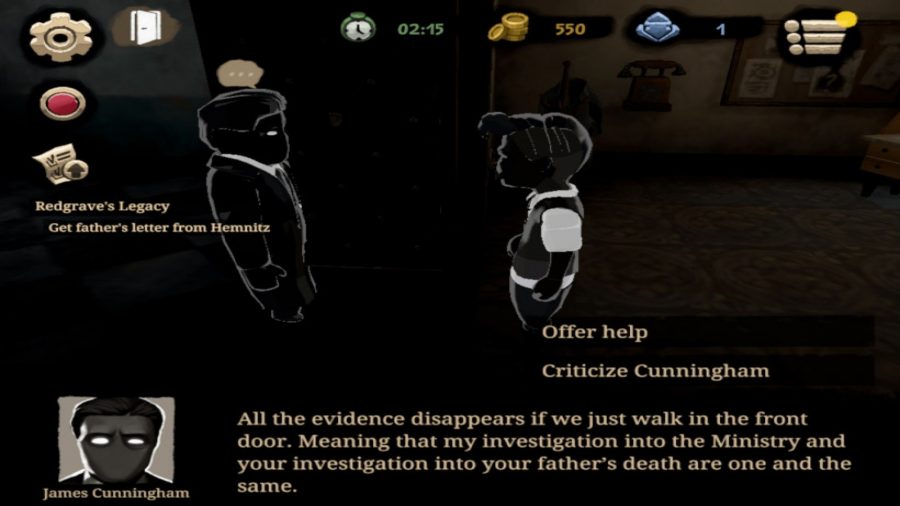 It’s about boredom and the banality of evil. It constantly tempts the player to try to white-knight some situations and black-hat others

And there’s the rub. In a broken system where the framework for justice and truth have been systematically dismantled and replaced by the rules and needs of a central State and its eternal (literally?) Wise Ruler, any kind of moral compromises are just necessary. Put simply, the game is full of people just struggling to get by, keeping their heads down and their hands (relatively) clean. But our dear Evan is stirring the pot, and to do this he risks losing his head to upset the status quo and get to the truth of his father’s death. Beholder 2 mixes the grand classic sense of good-vs-evil moral absolutism with a pragmatic sense of survival.

So it’s about boredom and the banality of evil. It constantly tempts the player to try to white-knight some situations and black-hat others, and this whiplash is only made possible because every player is holding out for the mythic ‘Good Ending,’ traditionally gated by the purest, nicest choices possible. Well, throw that ideology out the window, because Beholder 2 cares not a whit for precious conventions. It makes suffering and corruption feel boring and everyday because for those living under dire circumstances, the crisis at some point becomes everyday.

This plays out in good dialogue and character writing. Our main character is a generic bland guy just trudging through life at the player’s command, but everyone else has a unique agenda and voice, and the writing reflects this. It’s satirical bent also comes out strongly. Tons of bizarre quirks are presented unblinkingly, yet the most ordinary folks get sneers and jokes at their expense. The tone is surreal and mismatched at times. Just like with its predecessor, the plot advances through checkpoints and absolute stat requirements, so for all its feel of slow-paced corporate life, Evan is also breaking into safes left and right, and moving up as fast as possible.

The story is urgent and fast-paced, and the ‘campaign’ long enough to satisfy but brief enough to be intense. Just like with Beholder, there’s a constant source of stress. Do I have enough money? Did I do the right thing by that poor sap, or will the game punish me for misplaced compassion? 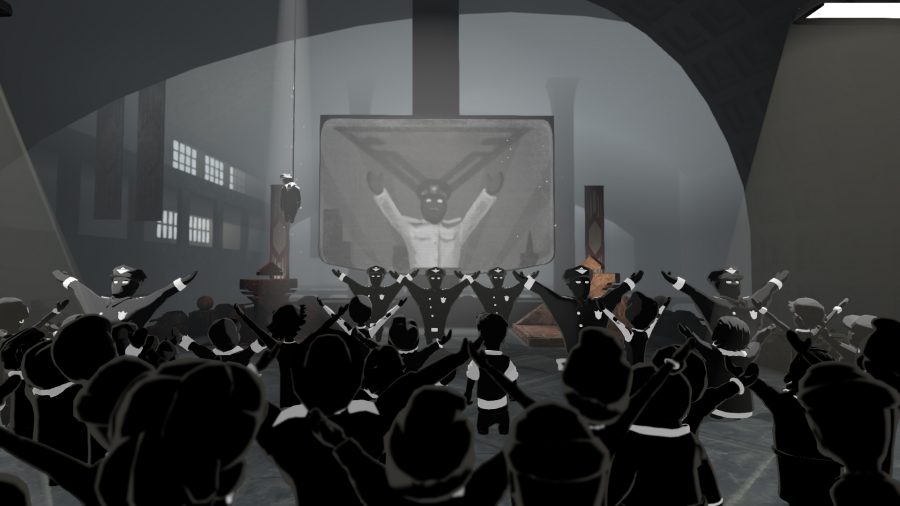 Whelp, dear reader, Beholder 2 plays its cards close to its chest, but generally speaking if your stats are okay, you are okay, so extra skulduggery isn’t strictly necessary.  The quest chains, in particular, give enough direct guidance that failure is explicit. Usually there are multiple paths to success, though, so either roleplay the decisions or suss out alternatives before committing to one.

There’s a lot of moving parts to Beholder 2, and in general they work pretty well. The basic movement system makes missing dialogue a tad too easy, though, and some decisions are punishing while remaining relatively opaque. (Cue player frustration and furore, like a lighter case of Pathologic 2). It blends the political with the personal without ever getting preachy or high-brow, and the gameplay is more refined, but Beholder 2 still has that brooding, claustrophobic atmosphere in common with the original. Case in point: you can get your coworkers executed as a purely careerist move.

While the game has a lot of good ideas and a much-improved execution of its predecessor’s spirit, it’s not quite a must-play. The humor is cagey and its satire often flat or unsubtle. Still a great game and experience, but Beholder 2 falls just short of compelling.

A definite improvement over the original, but Beholder 2 sometimes struggles to confront its own ambition.