It’s hard to explain what the DS and Wii era was like if you didn’t live through it. The DS was an absolute powerhouse, filled with quality titles and RPG classics, but also the sheer ubiquity of the dual-screened device meant it was pumped full of games that fulfilled Nintendo’s ‘Blue Ocean’ strategy.

This was an attempt to bring in more casual gamers, with software that appealed to anyone and everyone, often made with touch or motion controls in mind to be accessible to players of all ages and abilities. Nintendogs, Brain Training, Cooking Mama, and many more. All found huge success at the time with gamers and casual players alike.

One of the standout games in this remit was Big Brain Academy, a title that set itself apart from Brain Training with a slightly more jovial tone and a focus more on minigames than real tests. The aim was to increase your brain function through puzzles and games, and now here we are a generation later with Big Brain Academy: Brain vs Brain for Switch.

It seems this time Nintendo isn’t content on just making brains bigger, they want to stuff more brains into their game titles as well. But still, the particularly wordy Big Brain Academy: Brain vs Brain does hint at the transformative element at play here, this is a battle of the brains leaning heavily on multiplayer elements. This latest entry on Switch still has a series of mini-games and puzzles all designed to test your noodle, but every single one can be played competitively, either online or with local multiplayer. But more on that later. 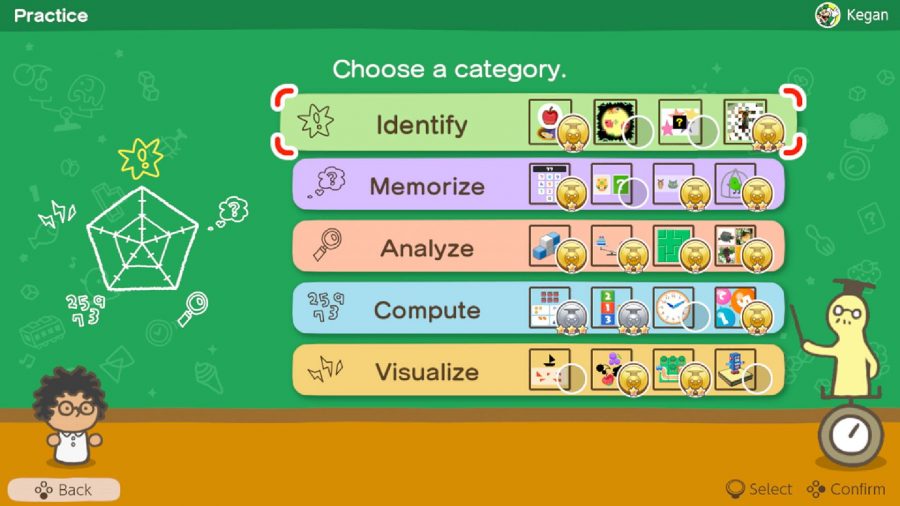 The actual games here are honestly quite nice. There’s a good selection, split into the categories of identity, memorize, analyze, compute, and visualize, all designed to test different parts of your brain. Each of the five categories has four games, so a fairly shallow move pool of twenty games off the bat sadly, but the steady increase in difficulty does add some replay value. They’re all presented with a cutesy hand-drawn art style and clear presentation. The game isn’t going to set the world on fire, but it all looks very cosy and lovely.

The minigames have you test your brain by counting how many cubes are in a pile, quickly sorting numbers from lowest to highest, or figuring out the heaviest item when presented with a series of different things on scales. I enjoy my time with these games, each offering a nice mental test that can ramp up considerably as you rise up the ranks. While each starts out on basic, there’s a sliding scale of difficulty that gets slightly ridiculous later on. Especially if you get a gold medal in each different game in practice mode! 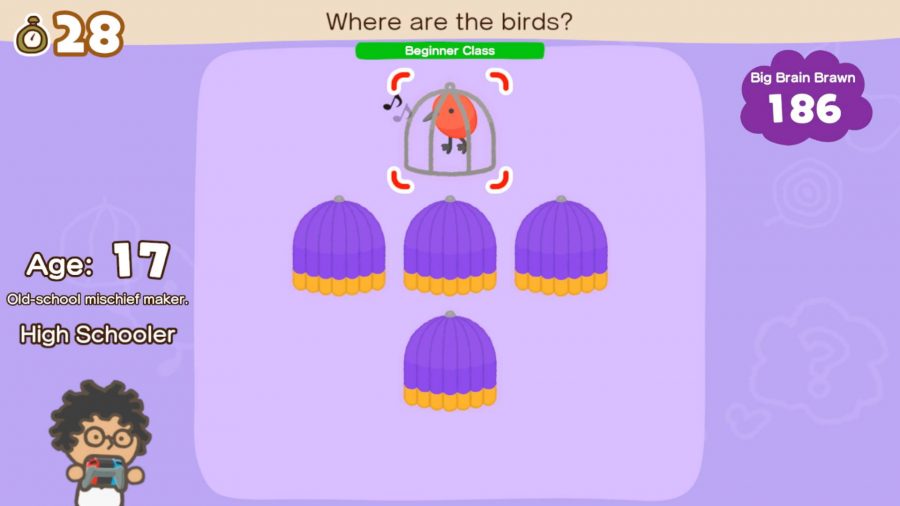 The twenty total games do feel like a nice spread of tactical thinking, but because there are only twenty, it occasionally feels more like a game of memory than a real test of brainpower. Especially with games like fast focus, which gradually reveals an image of an animal. Once you start to recognise the images of the animals, it becomes all too easy. This is a budget game though, so considering the different ways you can play each game I’m more appreciative of the content here.

Another thing that makes the games much, much easier, however, is touch controls. I recommend you don’t play this game any other way, especially when it comes to the multiplayer elements where you compete not just against other players’ scores, but their times too. While there‘s the option for controller support on every game, almost every single one is solved significantly quicker using the touch controls on offer. 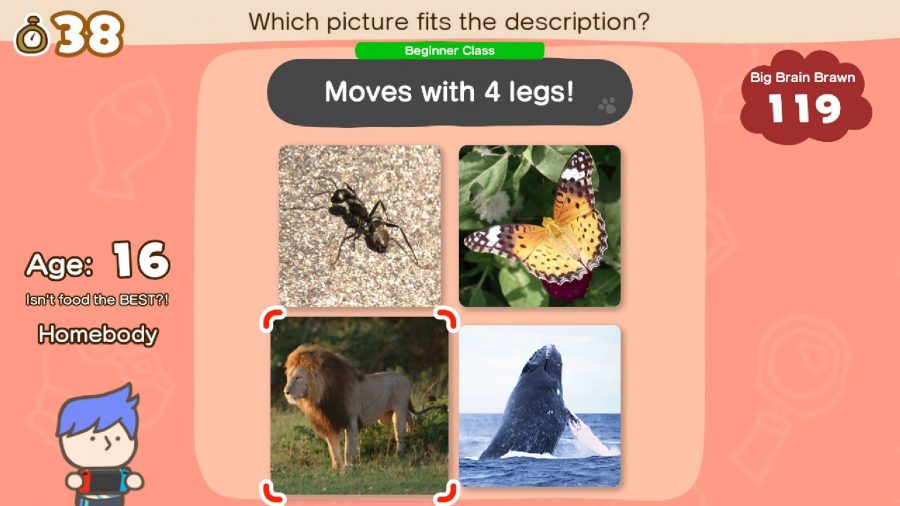 To be fair, when you play online, you can see exactly what controller set up your opponent is using (down to the colour of controller and Joy-Con in a nice touch), and it feels like matchups are meant to be made fairly, but the player pool before release is obviously fairly slim. This is a game I would like to see Nintendo bring to mobile frankly, as its educational premise and touch controls are perfect for smart devices. But I understand the push for local multiplayer probably made that impossible in this case.

Single-player is merely listed as practice in Big Brain Academy, so it’s clear that the multiplayer is designed as the bulk of the game. This is why it’s surprising to find just the one online mode, ghost clash. While you don’t compete against players in real-time, you do compete against their best time in each mini-game. Still, it’s fun to add a competitive element to these games, but I wish there was a little bit more to do with them. Things like an endless mode that swaps games, or other variations, would be lovely to see. 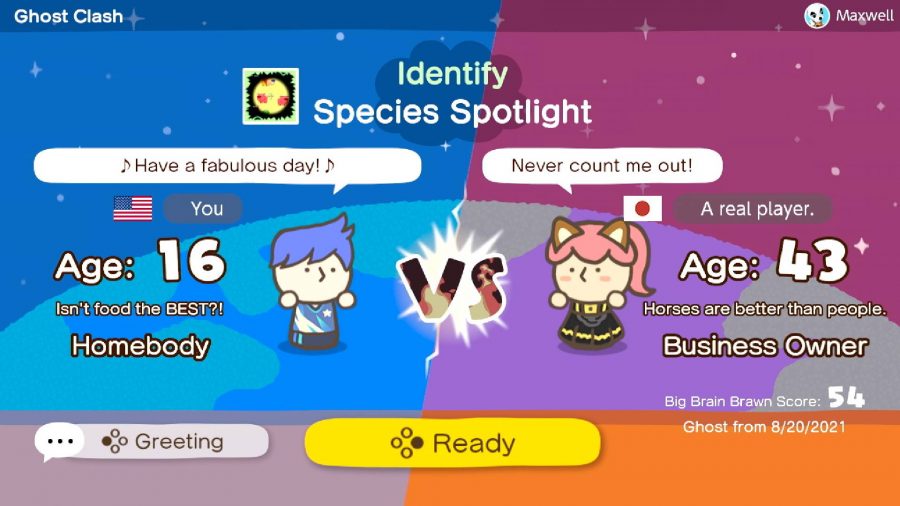 It’s fairly satisfying though, to see both your general score and your world rankings. I don’t want to brag but at some point, I was the number one biggest brain in the world, (before the game was officially released) so take that as you will. It gave me a good reason to dive back into the ghost clash mode and try to beat a few more puny brained chumps just to see my little score go up. It’s simple but satisfying, and imagine it’d be especially satisfying when various users in the house compete with each other as well.

The other option is local multiplayer, which luckily does play out in real-time. You can have several different profiles on your account, so you can keep track of everyone’s scores in the family. Then play with up to four players locally with controllers, as you race to complete minigames as quickly and accurately as you can. I had a lot more fun than I was expecting to with this, with the games being constantly engaging and lending themselves well to a competitive spirit.

It does get frustrating, however, that you’re all doing the same puzzles, so anyone with a keen eye can just look at the screen to try and complete things quickly after someone else. Each game awards points based on time though, so it’s still in your interest to just figure it out as quickly as possible, but a little variation would be great.

As you work through the modes you also unlock adorable little accessories for your chibi avatar. There seem to be absolutely loads of things to find, and I feel like I have barely scratched the surface. This feels like a game designed to be played regularly to keep your brain pumping, and it’s nice to see that you’re constantly rewarded for some time to come. 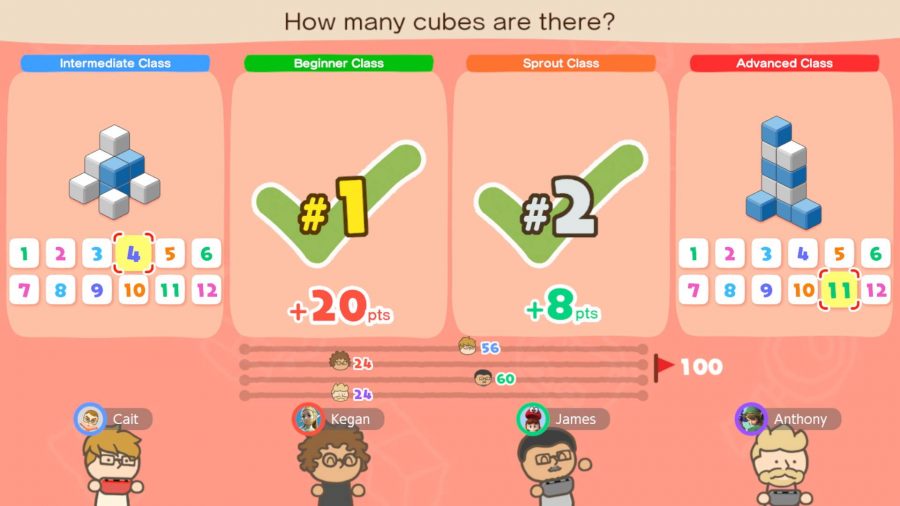 Big Brain Academy: Brain vs Brain is a lovely little package, that while it doesn’t feature a wealth of content, just about justifies its smaller price tag. The games are engaging and can feel like a real stretch of your intelligence, but I just wish there were more of them and more ways to play. Still, chasing scores in multiplayer is a thrill and there’s plenty of customisation options to unlock, so this could be a fantastic pick for families with young children looking to share a few games and build some skills.

A lovely learning experience that offers satisfying brain-teasing puzzles, but doesn’t quite have enough to keep players coming back for weeks. Fun multiplayer adds some mileage, though some extra options would really sweeten the deal