Boomerang X, the latest indie offering from powerhouse publisher Devolver Digital and developer DANG!, is a game with a singular focus. Massive AAA games are happy to have vast worlds, with intricate RPG systems and books full of dialogue, but indie games don’t have the time or resources. However, limitations cause focus, constraint, and clever design. Many smaller games need to make a choice about which elements to include, and then how well to execute those few ideas. In these terms, Boomerang X is a near-perfect Indie game.

Boomerang X meets somewhere between Superhot and The Legend Of Zelda, it’s a cel-shaded first-person action game, where your one and only weapon is the titular x-shaped boomerang. Your mysterious character, with mummified bandages covering their hands, washes up on a mysterious island and with very little dialogue to go on, you venture deep inside some caves to explore.

The heavily stylised action title then locks you in vast rooms while hordes of varying enemies are thrown at you, with nothing but your boomerang for defence. While there are many different enemies, a small number of yellow marked enemies are the ones you need to destroy in order to progress, appearing in several waves. Then, as you beat each room you will delve further down into the mysteries of the island, unlocking boomerang variations that each do something different to switch up the combat.

It cannot be overstated just how satisfying the combat in Boomerang X feels. One of the very first powers you unlock is the ability to zip towards your boomerang, so after you throw it, you can meet it in the air, catch it, then throw it again. You can even charge a throw, and time will slow as you charge. This transforms the combat into a delicate aerial dance of death that feels like Superhot on steroids. The enemies themselves also demand a certain amount of thought, as each room introduces a new hazard or a different type of enemy that will take some cunning to defeat. 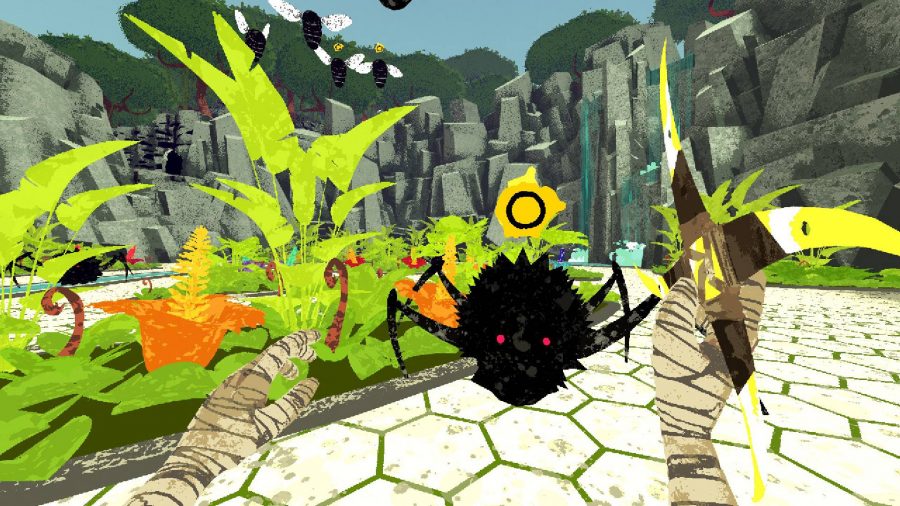 Between the many fun variations you unlock and the demanding nature of the different enemies, there simply wasn’t a single second I was bored. Some of the later powers are such a marked increase on your initial arsenal, but a well-curated uptick in variety and difficulty always matched my ability. There’s also a gentle but steady change to the way you move around the environment, as you gain new powers and learn the dance of combat over time. The arenas themselves get more difficult, and more vertical to match your power creep. Boomerang X does a remarkable job of keeping you engaged, throwing new ideas at you constantly, but never really leaving the singular focus of that one weapon.

A lot can also be said for the feeling and atmosphere derived from the art style and music. The stylised cel-shaded look brings the stark colours and cartoonish enemies to life. When you’re fighting giant frogs with jewels on their bellies, despite the ominous tone of the game, it all still feels in place. It feels like a dark children’s fantasy book brought to life, except you’re a deadly boomerang wielding assassin here to tear each character to shreds. 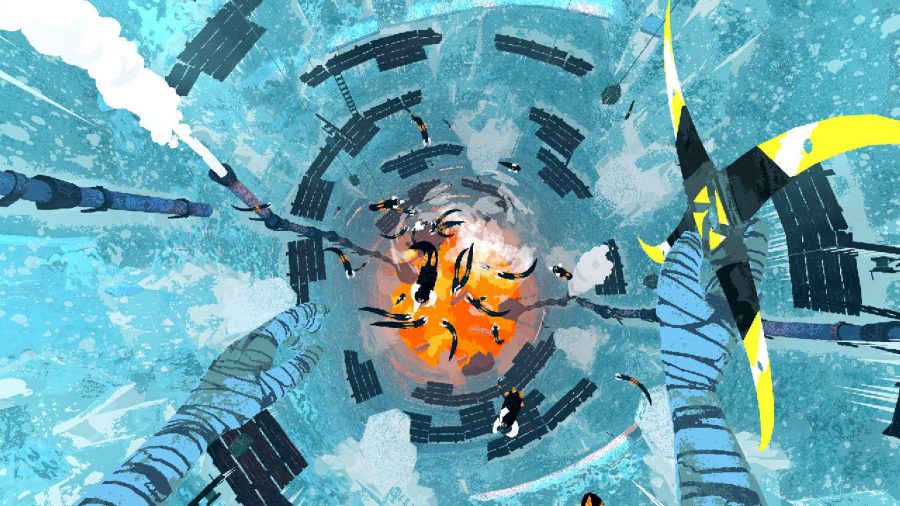 Each room or area also has a distinct change in both visuals and music, with ice chambers or lava pits serving as your cage for different challenges, all brought together through a daunting system of caverns and some weirdly entertaining NPCs scattered throughout. The level variety is nice and matches the constant evolution of the enemy variety as well, but along with the incredible soundtrack, each area has a distinct and interesting personality.

Boomerang X isn’t the longest game, but it does exactly what it sets out to do within that time. Each chapter can be replayed, and when you eventually do complete the game you’ll unlock a much harder new game+ mode to truly test your skills. Special mention should also be made for the game’s many different accessibility options, these help to reduce screen shake, make enemies clearer, and provide many different colour options. Not to mention the absolutely amazing, and very adjustable, motion controls, which once I had calibrated to my taste, felt almost as good as the controls in Splatoon 2. 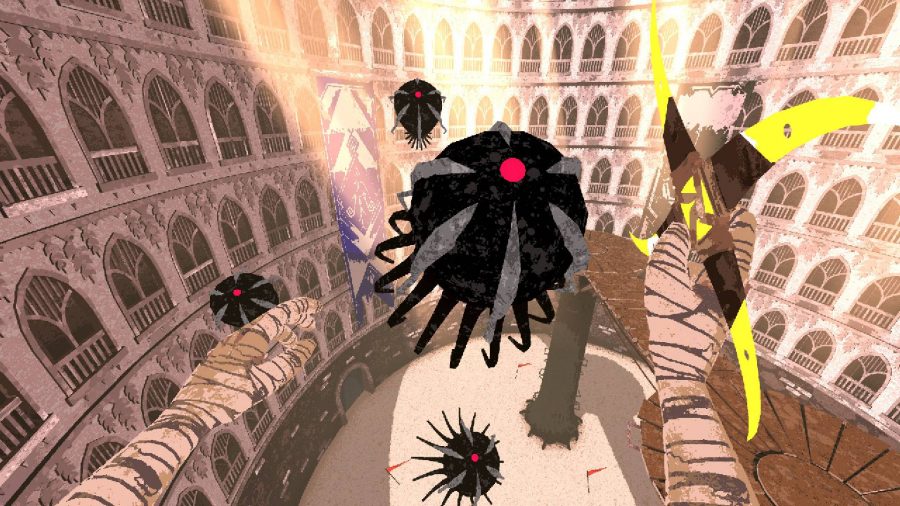 Overall, Boomerang X with its meticulously designed and razor-sharp combat is a thrill to play every single moment. The ominous world and adventurous atmosphere are brought to life wonderfully through distinct visuals and a fantastic marriage of dynamic music and sinister sound design. In a short time, it manages to stuff a huge amount of smart ideas and makes every moment a miracle of clever game design. It reminded me so much of the contained, but genius, design of Portal, I can only hope this game gets an expanded sequel and its own Portal 2 moment.

Dripping with style and absolutely stuffed with incredible combat, Boomerang X offers a rewarding blast of action with every moment of gameplay. It somewhat lacks replayability, but what's already there is staggeringly well executed. Boomerang X is one of the best action games of the year.