Okay, so I’m not afraid to say it: I am obsessed with Boyfriend Dungeon. I went into this game thinking I would only enjoy it ‘ironically’, but it didn’t take long for it to grab me by the hilt, as I found myself lapping up the general feel-good vibes dished out at every turn. Sure, on its surface Boyfriend Dungeon is a dating sim with dungeon crawler elements, but, beneath that, it’s so much more. It’s a journey about self-acceptance, facing your fears, understanding consent and boundaries, and the importance of love – both romantic and platonic.

You find yourself moving to a new town, greeted by your cousin Jesse, who appears to have one goal in mind: to score you a date. You’ve never been lucky in love, and he is dead set on changing that. So where’s the best place to meet new people? Why, the mall, of course. One issue though: the mall has been turned into a dunj, meaning it’s overrun by monsters. Oh, and most of your potential love interests have one thing in common: they can somehow turn into weapons (also known as Bae Blades which, in itself, is a stroke of comedic genius).

Each Bae Blade has a unique personality, which is reflected in their weapon form. Whether you’re handling Isaac, the straight-laced estoc, or slashing around with Sunder, the wild talawar, your fighting style speaks to the character of your chosen bae. This attention to detail makes gameplay feel dynamic and unique, wrapping you up in the relationships you build.

Combat is really fun. Battles are set in isometric dunj levels full of unique enemies and hidden vaults. You delve into two different dungeons with 12 levels each, where the enemies you fight are manifestations of your fears and insecurities. The first is based around your fear of change, and will have you slashing away through sentient retro technology, from flip phones to static-spitting TVs. The second is a nightclub inspired by a fear of intimacy, as you battle through sentient beverages and kissy lips. It is an unexpectedly empowering venture, especially when accompanied by the supportive words of your companions, who consistently check in on you as you fight. 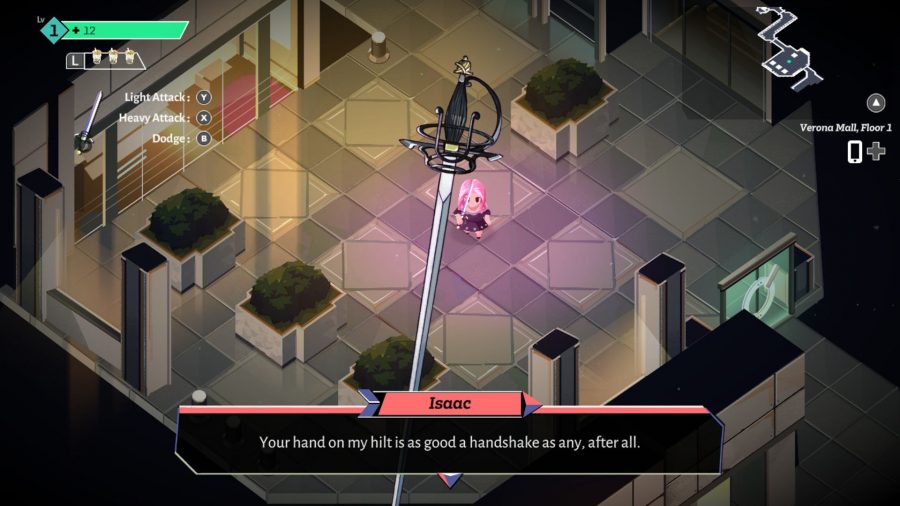 Working your way through a dungeon increases your relationships with your baes, with date opportunities available as they level. Peppered throughout the dunj, you find rest zones, such as arcades and abandoned VIP areas, where you get the opportunity to spend some downtime and get to know your pal, offering an enriching reprieve from fighting. If you max a bae’s level while working through a dunj, you can switch weapons between levels, allowing you to level different characters simultaneously. There are no real repercussions if you die while dungeoning – you can snag curatives along the way and heal yourself on the go, but if you end up biting the dust, you simply wake up the following day safely tucked up in bed, with nothing lost but a smidge of your dignity. This allows you to push yourself in battle and take risks, simply exploring with no time limit until you wipe out, and I found my skills and enthusiasm really benefiting from this.

That isn’t to say combat is entirely easy, or without its flaws – you often get swarmed and need to be tactical with your moves, and sometimes targeting can be a little hit or miss. But with responsive button input, an easy-to-grasp control scheme, and plenty of rewards to reap, battling my way into the depths never felt like a chore. In fact, I often found myself running back to a completed dunj for fun. If you’re more of a lover than a fighter, you can also enable the goddess shield from the menu at any time, which reduces damage by 50%. 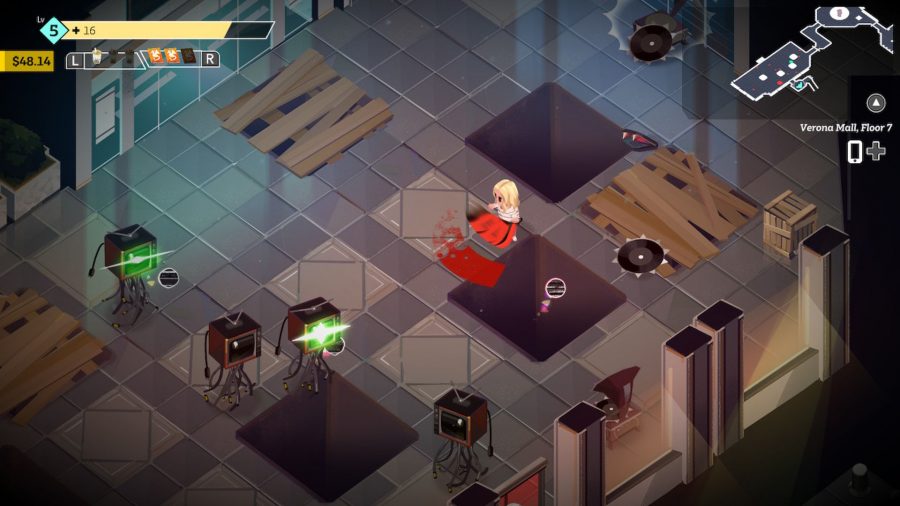 If, like me, you struggle to commit to one digital relationship and find yourself longing for polyamory, you’re in luck. The ability to romance whichever cuties you want simultaneously (aside from the cat, you weirdo) allows you so much more room to explore the character stories, which is necessary when you’re so spoiled for choice. Plus, who doesn’t want ten texts a day telling them how beautiful and special they are? Of course, if you’re not really into the romance stuff, you can stick to simply levelling up your friendship with the characters, no funny business required – as Kitfox so rightfully said, ‘platonic love is real love too’. Preach, sister!

Though my usual playlists mostly consist of emo tracks from the early ’00s, the electro-pop and acoustic lo-fi soundtrack of this game had me bobbing my head along before I knew it. Marksye and McQueen have done an amazing job of capturing the vibes of a summer of romance, and every tune they drop is a total bop, complimenting the general energy of the game. I even went in search of the OST after playing so I could vibe along during work, and I highly recommend it. You can check it out on Spotify, here.

The main narrative is relatively simple and short, and almost takes the format of an old Scooby-Doo episode. But it fills its purpose as the thread that pulls all of the other stories together, and definitely has its engaging moments. Though do heed the warning about stalkers; Eric is a total creep. The storytelling really shines, however, in the individual bae blades’ stories. Whether you’re helping a college student cook without burning their dorm down, assisting a gentleman stand up to his abusive father, or uncovering the deep secrets of the mysterious and seductive nightclub owner, the subplots are enthralling. Despite not being a big romance fan, I was totally engaged in these stories, and felt as though I was taking part in a compilation of short stories, each with its own merits. 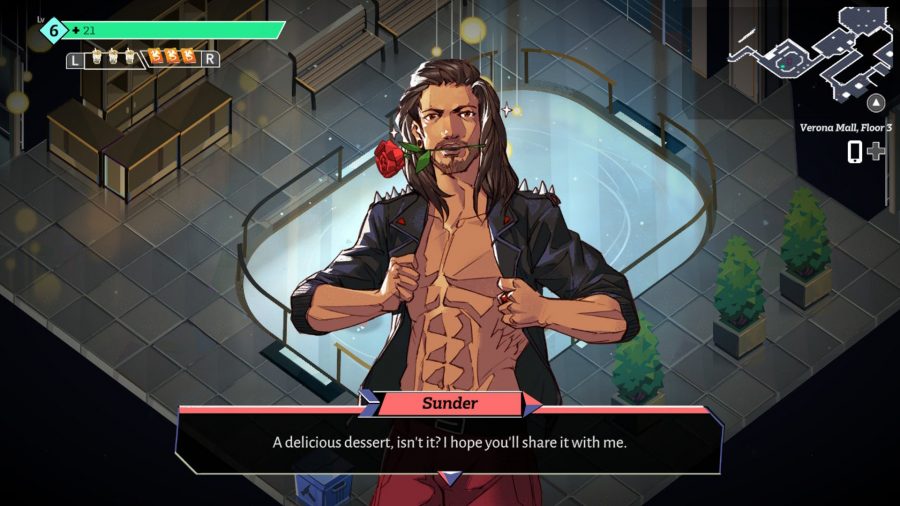 For the most part, the character dialogue feels natural and unique to their personalities – if not a little cheesy sometimes. Your dialogue options seem to have little impact on the direction of conversation (though some get a more positive response than others), and dialogue when hitting rest spots in dungeons is repeated if you visit the same type of spot with the same character. But the attention to small details is impressive – for example, I mentioned to one character that I was vegan, and from that point onward characters only offered me vegan food, which really gives you the illusion of being listened to.

There are a few things I would love to see in the game in the future. First and foremost, I want more. More dungeons, more boyfriends, and to quote my character ‘more dates plz’. Boyfriend Dungeon is super fun and reminded me that games are meant to be enjoyed – but the main storyline is short, and if you don’t have the motivation to max out everyone’s love ranks, you will quickly run out of things to do. There are also only two dungeons, with 12 levels each, and being the dungeon diver I am, I ended up running these multiple times. With the unique concept of facing your fears, I would have loved to see this explored more. The Kickstarter did, at one point, mention a third dungeon in the making, along with two new cuties to date (I am seriously excited about the sensitive surfer bro, Jonah) and I feel the game would really benefit from this. 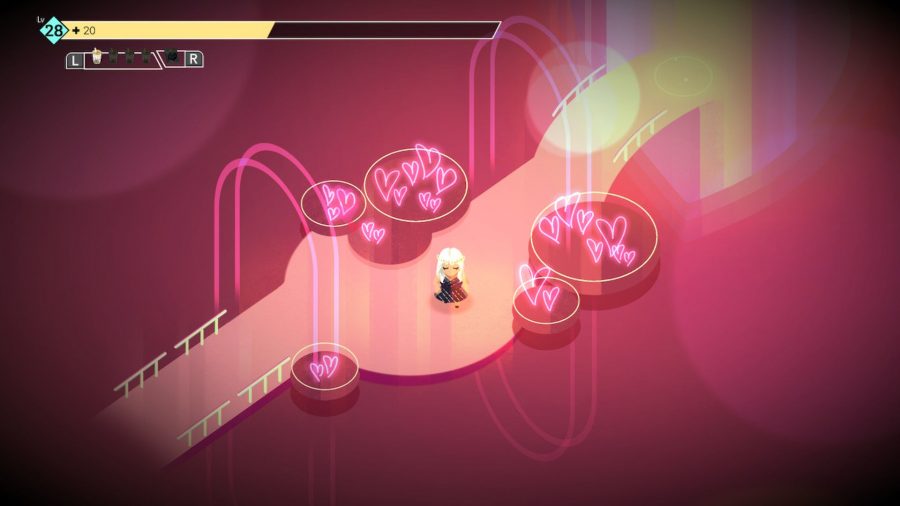 I would also love to see less rigid dating options, and more of an incentive to spend time with the baes you’ve already maxed. Perhaps allowing the player to visit the baes in their usual spots for a quick chat, or introducing a free play mode where you can choose to stay beyond summer and simply roam around fair Verona beach with your hotties would make it feel more worthwhile. Likewise, obtaining a strong ability upon maxing your bae blades seems a little fruitless, as, by that point, there’s little use in taking another romp through the dunj with them.

Overall, Boyfriend Dungeon really stole my heart – and my whetstone – and my only complaint is that I want more; which is a pretty complimentary critique, if you ask me.

A great dating-sim, dungeon-crawler hybrid that takes you on a journey of self-acceptance, love, and facing your fears - all while smooching some cute swords. It’s a short but sweet tale that will leave you wanting more.