It’s been said time and time again: JRPGs are the gaming equivalent of comfort food. They’re the hearty stew that gets you through winter or the tub of ice cream that softens a bad breakup. No matter when you first encountered the genre, whether it’s with Chrono Trigger or Dragon Quest XI, that feeling will likely resonate.

It’s no more true than with Square Enix’s recent spate of neoclassical JRPGs – a term coined by me, right now, and one that I’m very proud of. Because the shoe fits: Bravely Default, Octopath Traveler, and the criminally-overlooked Various Daylife all share a similar design philosophy that harkens back to the JRPGs we cut our teeth on, while feeling very modern at the same time.

Bravely Default 2 is the latest offering in this subgenre, and, in many ways, it’s the best one yet. It’s the culmination of the design philosophies that inspired those before it, but it also keeps one eye on the future. The result is a confused title that can’t quite decide what it wants to be, or commit in either direction, but one that’s full of charm, wit, and flourish nonetheless.

Let’s start with the bits that harken back to the good old days. Primarily, that’s in the game’s plotting and structure, which is so full of cliches it borders on parody. You play as the amnesiac hero (check), who has to help a naive princess (check), older and wiser comic relief (check), and serious and brooding mercenary (check) save the world (check, check, check).

While the characters are pretty forgettable, they do gel nicely together, which leads to some charming, and occasionally humorous moments. The best compliment I can give them is that they were never tiresome, and provided good company throughout the lengthy adventure. I was always happy to hear what they had to say, and to delve into their sidequests to learn more about them – even though I felt like I’d them all before.

But what about that saving the world stuff? It’s also a bit overly familiar. You visit castles, deserts, woodland, and more as you strive to recover four elemental crystals (seriously?) that allow you to become the four heroes of light (you’re having me on, surely?!) and put a stop to a bunch of bad stuff happening. 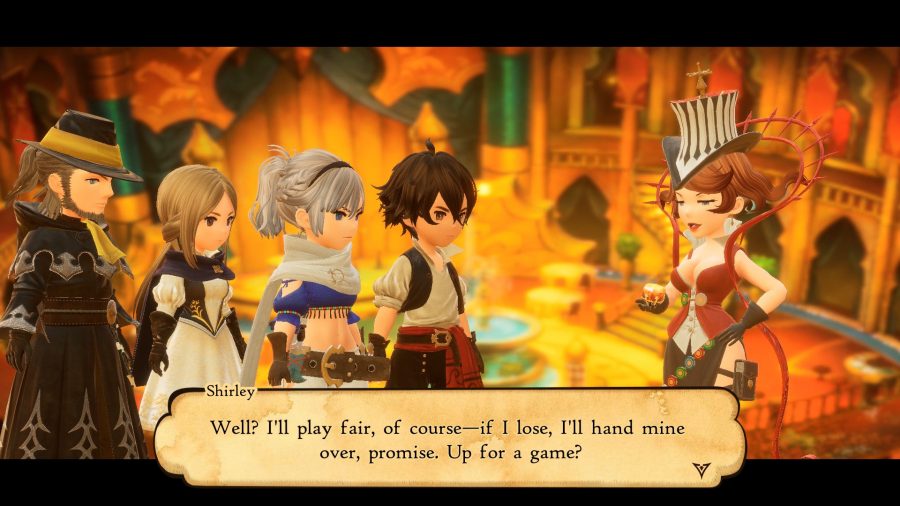 To be honest, the overarching plot washed over me, but I found the characters you meet along the way to be far more interesting. Their motivations often feel a bit forced or unconvincing, but at least Square Enix makes the effort to make the bad guys relatable, rather than relying on old-fashioned black and white, good and evil tropes.

Where things do get interesting is in that combat system. If you played Octopath Traveler, it will feel quite familiar, though it’s really more of an evolution of it. It all boils down to the clever Brave and Default mechanics. Brave allows you to use an additional move during your turn, up to a maximum of four, while Default sees you defend, storing up a Brave Point (BP) that you can use in a future turn.

Initially, when battles are a fairly simple affair, I found myself just using this to unleash four attacks during each character’s turn to power through the grind on the over-world map. Square Enix clearly intended this to happen, as it included a handy option to repeat your last action with the tap of Y, as well as speed up battles. This allows you to grind without any of the, errr, actual grind. 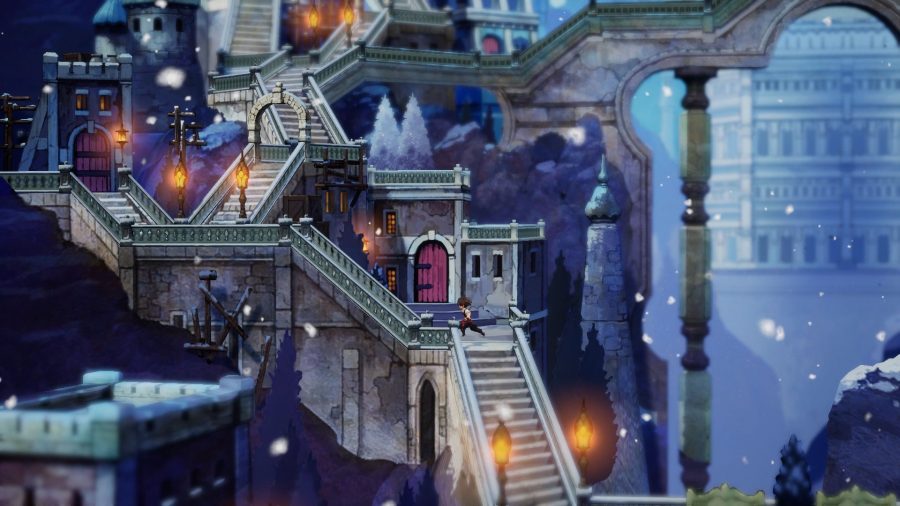 As Bravely Default 2 ramps up in difficulty – and it does so rather quickly – I found myself using the battle system as intended: saving up BP as I sought moments of weakness in my enemy’s attack patterns to exploit with a volley of powerful attacks. It also allows you to recover from bad situations, like reviving and healing a character in a single turn. This puts you in negative BP though, which requires you to wait two turns before you can act again, so there’s a nice push and pull to your decision-making.

Building your characters is equally as complex a process, and possibly even more fun. As you progress, you unlock devices known as Asterisks, which provide access to a wide variety of Jobs. Getting a new Asterisk is a very exciting moment, as it opens up a whole new playstyle to explore or, at the very least, supports a build you were already working on.

Your party is made up of four heroes, and you can equip each of them with a main Job and sub Job. The main Job adjusts your stats and two fixed passive abilities. As you level up your Jobs – which you do independently from your character level – you unlock even more passive abilities and active skills. Once a character has unlocked a Job’s passive skill, you can equip it in one of five different slots, and it will remain no matter the choice of main and sub-Job you pick. 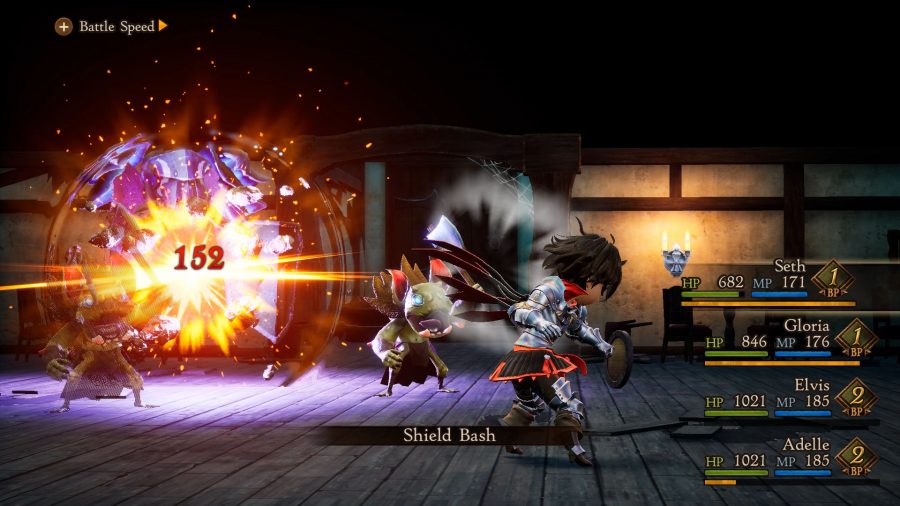 This is where theory-crafting comes in. When the system clicks, you will head straight to that Job screen and scour through the various passive skills, looking for those that support the main Job you’re targeting for that character. For example, my favourite so far is my Berserker Adelle, who combines passives from the Monk, Beastmaster, White Mage, and Black Mage to create an absolute powerhouse that can hit really hard, recovering her HP and MP with each attack.

For me, an obsessive theorycrafter of over two decades (boy, I feel old), Bravely Default 2 is an absolute dream come true. It’s right up there with Dragon Age, Baldur’s Gate, and the early Final Fantasy games for its sheer variety of build options, and I’m constantly excited to unlock a new Asterisk to see what options it will open up.

That’s without even mentioning the wide variety of gear on offer. Each enemy is vulnerable to a weapon type (sword, axe, bow, spear, dagger, and staff) and an element, while each Job has elemental abilities and is stronger at using different weapon types. This is the second aspect of theorycrafting, as you need to ensure that your team has balance when it comes to using the various different weapon and element types, and that each of them is using a weapon appropriate to them – or no weapon at all, in the case of the Monk. 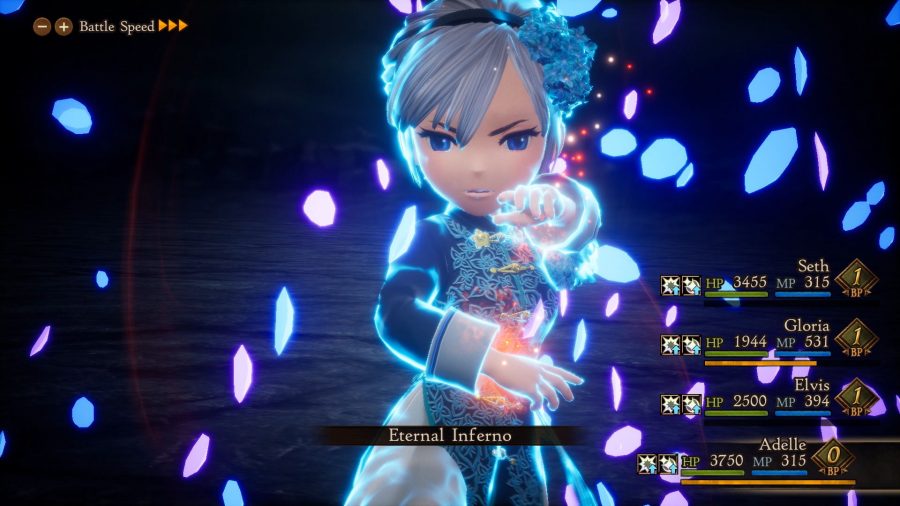 Fortunately, there’s a lot of flexibility when it comes to equipment. You have two hand slots, and every character can dual-wield, use a weapon and shield, or, in the case of the bow, equip a single weapon using both hands. Each style has its own strengths and weaknesses though. Sure, you’ll deal more damage with two weapons than one, but you won’t get the defensive benefits of a shield, or heavier armour.

It all combines to create a fiercely addictive system that only gets more engaging the further you get in. Square Enix drip feeds you with new Asterisks and equipment that can completely change your build, or open up options you haven’t even thought of. If you’re of a certain mindset, you can easily get lost in it, and it results in plenty of replayability, as you experiment with Jobs you ignored the first time around.

Going back to an earlier point I made, where I suggested that Bravely Default 2 has an eye in the future, well this is primarily in the visuals. Reading other reviews, I can see that they’ve had a mixed reception, but I found them nothing short of gorgeous. The Chibi character models are cute, if not to everyone’s tastes, while the overworld map features wildly diverse biomes, encouraging you to explore. 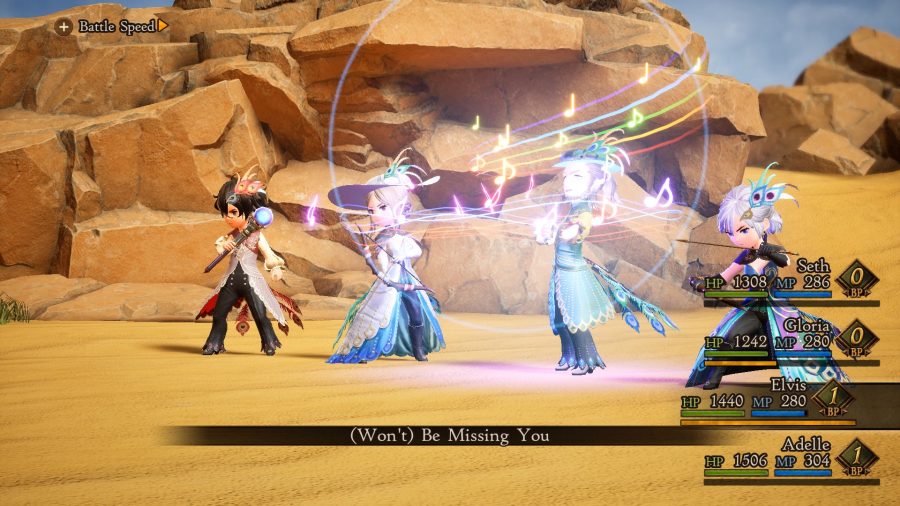 If I had any complaints with the visual style, it would be that the cities don’t match the aesthetic of the rest of the game. The overworld, dungeons, and other explorable areas almost look like they’ve been shaped from clay (it’s a lot nicer than it sounds) while the cities look like paintings. They’re beautiful paintings, don’t get me wrong – particularly at night, when the lighting effects are in particularly fine fettle – but they do clash and feels out of place. I feel like Square Enix would have been better off committing to one style or the other, rather than the Frankenstein’s monster we’re left with.

I found Bravely Default 2 to be an incredibly charming adventure

Technically, it’s more of a mixed bag. What baffles me fairly often when it comes to exclusives is a sub-1080p or 720p image when in docked or handheld respectively. Surely, if you’re developing a game exclusively for the Switch, this is an aspect that’s well within your control as a developer. Yet, Square Enix provides an image that’s noticeably lower in resolution than the Switch is capable of, and noticeably blurry as a result. It’s also rife with jaggies, and doesn’t run particularly well. We’ve experienced slow loading times and frame rate dips – you really feel that it’s taxing the Switch.

But it’s far from broken, and doesn’t detract hugely from the experience. At worst, it just makes you reconsider opening up party chart or entering into a battle, as the few seconds of freeze while it loads is just a little off-putting. In fact, a little off-putting is about the extent to which all of these issues affect the entire experience. 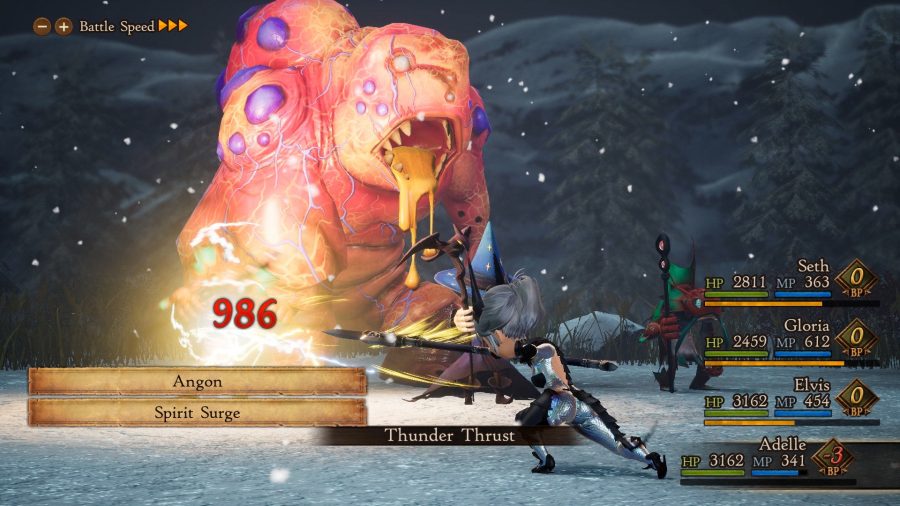 Because, overall, I found Bravely Default 2 to be an incredibly charming adventure, which does an excellent job of bringing us back to a bygone era of gaming, while still feeling distinctly modern. The highlight is the combat system, which, along with Octopath Traveler, is one of the best we’ve ever encountered, and the variety of builds on offer here are a theorycrafter’s idea of heaven. If you’re into JRPGs, we feel very comfortable recommending Bravely Default 2.

A charming neoclassical JRPG that, while somewhat flawed technically, will appeal to theorycrafters and those looking for gaming comfort food