The Call of Duty franchise is one of the most recognised in the era of modern gaming. The series is available on a multitude of platforms and has dabbled with mobile in the past. On October 1, 2019 Call of Duty: Mobile released on Android and iOS devices, bringing the competitive world of first-person online shooters to mobile devices in a way only a few have attempted before. So we thought it was high time to give you some Call of Duty: Mobile tips.

Call of Duty: Mobile features your favourite maps from across Modern Warfare and the Black Ops series, alongside a growing number of recognisable characters, weapons, killstreaks, and more. It also looks, and, more importantly, feels like an authentic Call of Duty experience. Sniping an opponent halfway across the map feels as good on a touchscreen as it ever did.

There are likely many mobile gamers out there that have never experienced the game first-hand, so we have plenty of Call of Duty: Mobile tips for you. These tricks are going to help you get familiar with the game, and help you become a master of multiplayer. Oh, and once you’re done here, head over to our COD Mobile codes list to grab some useful freebies.

Here’s everything in our call of duty mobile tips guide:

Call of Duty: Mobile is free to download and play, but this can be supplemented by microtransactions for premium in-game currency, called COD Points.

Speaking of loot boxes, these can be purchased with COD Points as well, and offer players the chance to win a variety of weapon skins that are divided into three different rarities. The  loot box odds are disclosed within the game, which can be seen below: 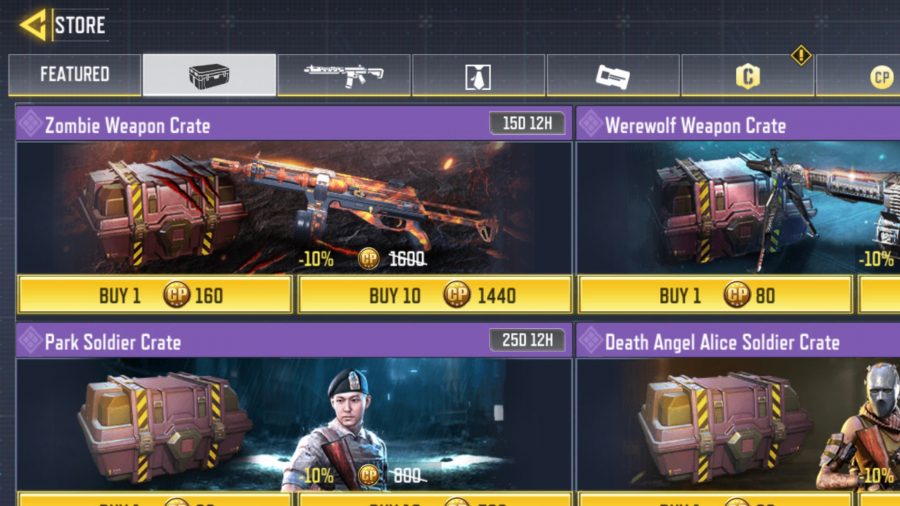 Different skins can also be purchased in the store with COD Points, for a variety of prices. There are multiple COD Point packages currently available in the store, ranging from $1-$99. You can see a full list of bundles below.

cod mobile levels: How do i level up quickly?

If you’ve got your eye on an item in the Battle Pass, then you might be wondering how to level up in Call of Duty: Mobile. The simple answer is to gain as much XP as possible. The more complicated answer involves strategically choosing what game modes you play.

To level up fast, you’re probably going to want to stick to Unranked PvP matches instead of the Ranked matches, simply because they are easier, and you’ll be able to farm a little bit more XP during each match. If you’re getting bored and want to switch things up, you can also play Domination mode, which nets a fair amount of XP and can be completed quickly.

One mode you’ll want to avoid if you’re trying to farm XP is the Battle Royale mode. While it does tend to net more XP than others, the games take a long time. You may get 4,000 XP from a Battle Royale game, but you’ll also sacrifice a large chunk of time. Instead, you could have gotten 2,500 XP in each match from three or more Unranked PvP games in the same amount of time.

When you first start playing Call of Duty Mobile, you’re going to feel like you’re an absolute god. But before you set up your own Twitch stream and head on over to an eSports event, it’s important to note that the game does pair you up with bots, initially. This is both for cynical (that rush you get from absolutely dominating will entice you to play more) and legitimate reasons (it’s a nice and gentle method of easing you into the gameplay. 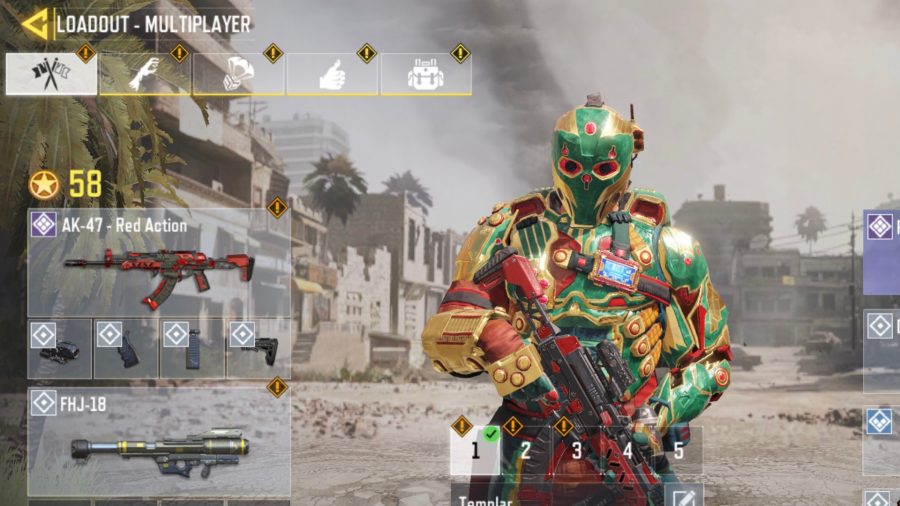 You’ll start to notice that the bots start to vanish at around level ten though, and they’re completely absent in Ranked modes.

cod mobile friends: How do i add friends?

If you and your friends want to play together, then you’ll probably want to add them as a friend. There are a couple of different ways to add friends in Call of Duty: Mobile. For starters, you’ll want to click the icon of two humans on the top of your screen. This is the friend page. From here you can connect with friends on social media, find recent players, see your friends list, add friends from the suggested list, or search their name/ID.

If you can’t remember your username or want to find your ID number, you can locate the information within settings. Simply click the gear to the right of the friend’s icon and go to the ‘Other’ tab. On the bottom of the screen, you should see your ID number as well as your username.

Cod mobile multiplayer: can I play a 1v1?

We all have that one friend whose only comeback consists of “1v1 me in COD bro.” Well, if you want to settle the scores in the mobile version, you can do that by following a few simple steps. From the home screen, select multiplayer and then the “Private” button in the bottom left corner.

cod mobile name: can i change my name?

If you’d like to change your nickname, you can do that by following a few simple steps. Unfortunately, it is not as simple as clicking a button to change your name, but it is possible. For starters, you’ll need to link your account with Facebook. If you don’t, you won’t be able to change your name. You can do this by going to the settings within the game and clicking the ‘Link’ button in the top right corner. 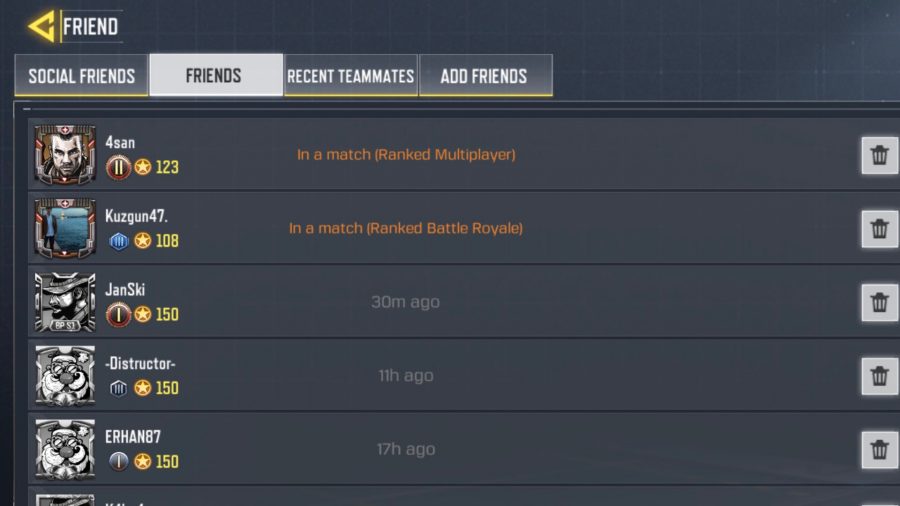 Once you do that, you’ll be prompted to sign up with Facebook, but you will keep your original nickname. If you want to change your name, you’ll need to uninstall and reinstall the app. Don’t worry; you won’t lose your account or any of your progress. Once you reinstall the app and open it up, you’ll have to login with Facebook again and you’ll be prompted to change your nickname.

cod mobile chat: how do i talk in multiplayer?

If you want to play with your friends, then you also might be interested in using voice chat, which is really simple. Simply choose the ‘Multiplayer’ option on the homescreen then press the little microphone in the bottom left corner.

Call of Duty: Mobile does contain controller support, though it only works while you’re in a match. You’ll need to use the standard touch interface to navigate the main menus.

You will need to connect your controller prior to entering a match. This is mainly done via Bluetooth pairing, although some controllers may accept a wired connection. Further advice on pairing a controller to your phone can be found here. Once paired, you will need to go into the Settings menu and toggle the “Allow to use controller” option.

cod mobile pc: Can you play on PC?

Despite being a mobile game, players are, in fact, able to play on PC. GameLoop, a child company of Tencent, has made the game available on PC via an emulator. Since the company is associated with the developers, you don’t need to worry about getting in trouble for emulating the game. 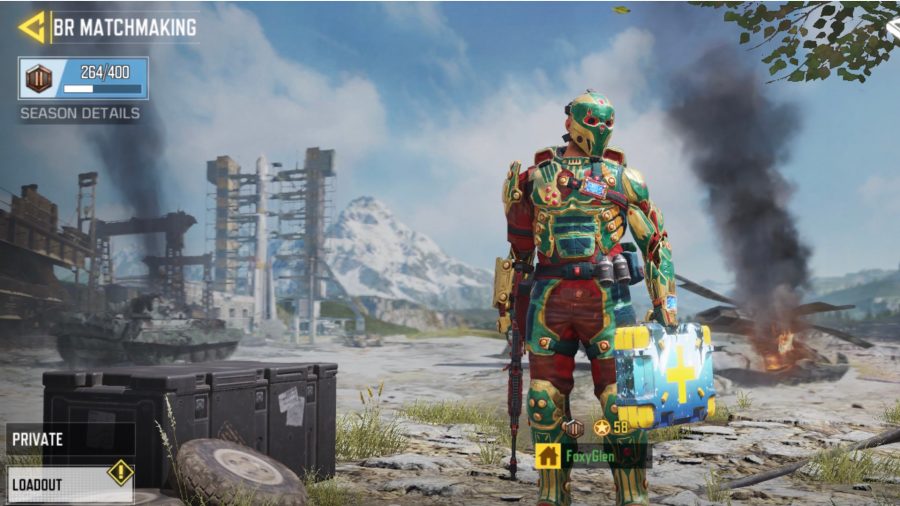 You can check out the Call of Duty: Mobile emulator on the GameLoop website. This will allow players the ability to experience the mobile game with a mouse and PC. Further, the emulation download is only 10 MB, which shouldn’t take more than a few seconds to download, depending on your internet speeds.

Cod Mobile tier list: what are the best guns?

There are tons of great weapons in Call of Duty: Mobile, but only a few rank among the best. We have compiled a list of our favorite weapons in the list below.

As you can see, we have chosen two from each category of Primary weapons that you’ll want to use if you have them unlocked.

cod mobile credits: where can you get them?

Perhaps one of the most important of our tips has to do with Credits. Simply put, Credits can be earned by playing matches and can be redeemed in the store for new weapon types, sprays, and skins. However, building up a nice supply of Credits can take a while. Here are a few methods of grabbing some quickly: 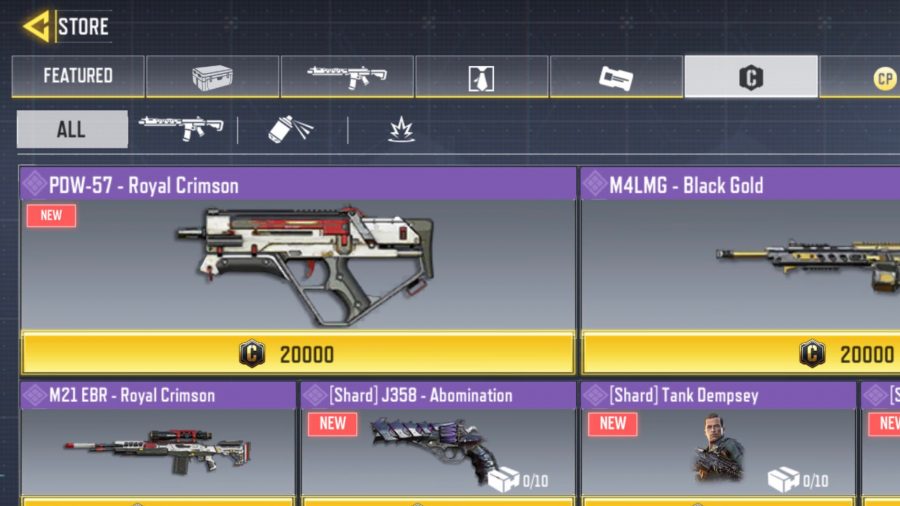 Credits can also be earned by leveling up your Battle Bass. However, this method can be slow; especially when you get to the higher Battle Pass levels. However, when you reach a Tier that offers Credits as a reward, you’ll be given a handful of them at once.

cod mobile nuke: how do you get one?

If you want to get a Nuke in COD: Mobile, you’ll need to do two things:

Reaching rank 20 shouldn’t take you very long, but the second requirement is a little tougher, as it will require you to get a killstreak of 20. This means that you’ll need to kill 20 enemies in a row without dying. If you die, your killstreak counter will reset.