Back when the original PlayStation hailed in an era of 3D visuals, 2D platformer Castlevania: Symphony of the Night boldly entered the arena with no shame. With Mario gone three dimensional the previous year and the Legend of Zelda soon to make the switch, releasing a 2D platformer seemed incredibly shortsighted. But Konami knew exactly what they were doing.

Of course, Symphony of the Night quickly became a cult hit and is now a frequent contender for the top of greatest games ever lists. It launched not one but two well-received trilogies on Nintendo handhelds and became grandfather to its very own subgenre: the Metroidvania. As the indie revolution arrived, the freedom, creativity, and room for narrative that the Metroidvania formula offered within a 2D space led to an explosion of games in this style. Where would modern indies be without Cave Story and Shadow Complex?

Emerging from this indie scene, mobile gamers have seen some phenomenal Metroidvania titles. This includes underwater variant Aquraia, beautifully animated Dust, criminally underrated Dandara, rogue-ish Dead Cells, the fantastic exclusive Grimvalor, and even Apple Arcade’s Shinsekai. The continuous, iterative gameplay of the genre makes it a great fit for hardcore gamers playing on mobile. It is now the perfect time to revisit the game that inspired them all: Castlevania: Symphony of the Night.

Presumably as part of a promotion for the third season of the surprisingly good Netflix anime series, Konami has just dropped a mobile port of Symphony executed by Dotemu. The version hitting mobile is the same one that came with PSP title The Dracula X Chronicles. Compared to the original, it has an improved script and voice acting that loses some of the original’s b-movie jankiness (including the infamous line: “What is a man? A miserable little pile of secrets!”). Players who remember the original may be disappointed, but, overall, it’s for the best. You do also get the option to play as Richter or Maria from the start.

Other differences from the classic are refined item menus that function with touch controls and higher-resolution text and artwork. In terms of live assets, the game’s pixels are chunkier than the retro games, which has lifted its style. Played on a larger screen, you may be surprised by how few tiny squares the original animators had to work with. That said, the animation holds up. It’s incredibly detailed and lifelike for the era, and a masterclass for today’s pixel artists.

Gamers without dedicated controllers will be stuck with on-screen controls, of course. These are not ideal: you have a simple touch pad rather than the more-intuitive swipe-anywhere controls used by games like Dead Cells. The jump button is easy to hit, but the various attack buttons are fiddlier. There are a few allowances made to touch gamers: hotkeys are available for the spells and transformations, although one does wonder why it’s still d-pad-up+attack to use special weapons. The touch controls are also not customisable for sizing and position, which is a weird oversight for an experienced developer of emulated classics to make. 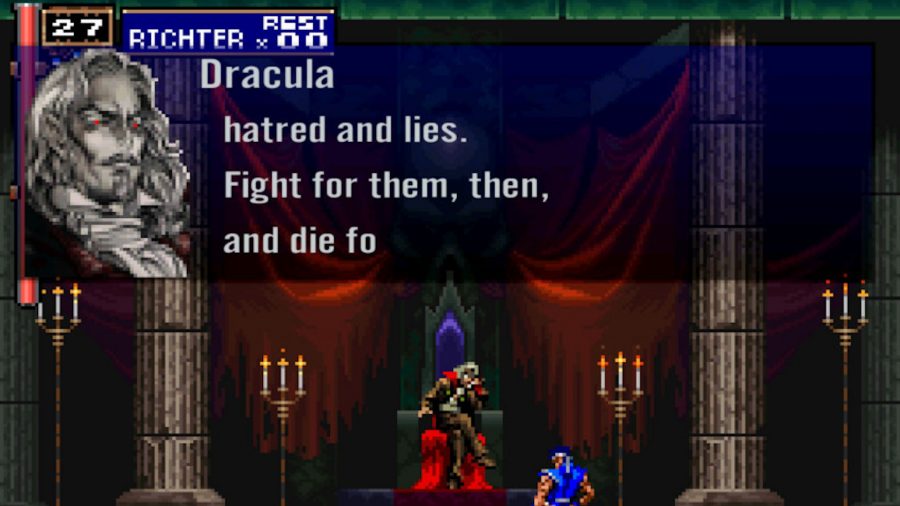 The game works best with a dedicated controller, naturally. One bizarre choice is binding the map to a flick (in any direction) of the second analog stick, especially when L2 is just sitting there doing nothing.

But the game itself? It’s still incredibly good. You have a massive, varied castle map that’s literally twice as big as you think and packed with details that tell you a story without the need for lengthy cutscenes. It’s challenging, but not frustrating, with plenty of secrets for hardcore gamers. Combat, especially boss combat, requires thought, skill, and judicious use of your abilities.

There’s some light RPG elements in building your stats and finding new equipment. Yes, there are ways to break the game and make Alucard incredibly overpowered, but honestly that’s part of the fun. This version is even enhanced with the ability to instantly continue from the last room you entered rather than get dragged back to the last save point. (If this gets you stuck in a tight spot, you can reload from the last hard save.) 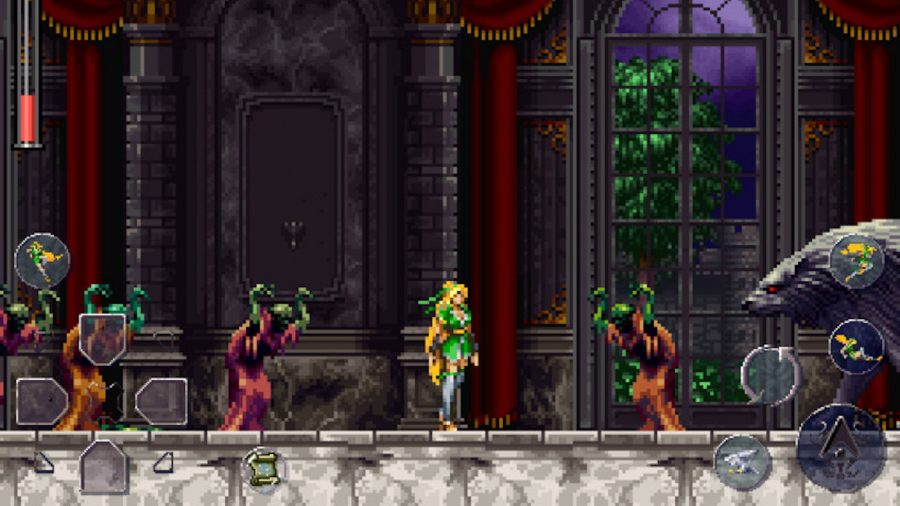 At a mere three dollars at launch, this is definitely the cheapest Symphony of the Night has ever been, unless you fancy scouring garage sales for the original CD. Even with the poor on-screen controls, it’s worth trying at that price. If you missed the original, it’s a chance to experience one of the pillars of a now-trending genre. If you remember it fondly, that’s a small price to pay for the waves of nostalgia you’ll feel. If you do have a controller, you have no excuse. Get this game now. Maybe if enough people buy it, a port of Rondo of Blood will be just around the corner.

Castlevania: Symphony of the Night review

A solid port of one of the greatest games ever made.