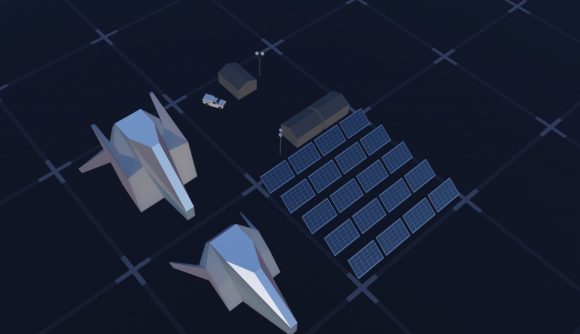 Bobby has revealed the first gameplay footage for its new sci-fi strategy game, Chaotic Era. The game first appeared back in February with a teaser trailer that left many of us puzzled as to the true nature of the game, but enchanted nonetheless by its standout ’80s sci-fi-themed visuals. The newest trailer confirms that Chaotic Era is, indeed, a space-based RTS, and further details on Bobby’s website give a little more insight into the game:

“A lone evacuation ship hurtles out into the darkness of space, thousands of lightyears off course. Onboard are the only humans left alive, awoken from hibernation by a nearby world. They reactivate their AI navigation system—damaged, but functioning enough to perform its hard-coded directive: to protect, sustain, and expand civilization.”

It’s a pretty exciting setup, and hints at Chaotic Era’s true scale – as a huge real-time strategy game set within a procedurally-generated universe. You grow your fledgling civilisation into a galaxy-spanning interstellar empire, which is pretty exciting, as that scale might dwarf all but a few mobile strategy games.

You can watched the trailer for Chaotic Era below:

You can find out more details about Chaotic Era on the Bobby website, including some posts about how ’80s sci-fi inspired the game’s UI, and where Chaotic Era’s influences come from. Either way, we’re very excited to see a cool-looking strategy game of this scale make it to mobile.

You can currently sign up for further info on the website as well. If you’re on the lookout for more empire-building games to play in the meantime, maybe give our best mobile strategy games list a whirl?