Even 19 years after its original release, Commandos 2 remains an absolute classic. I was pretty young at the time, but I remember it being one of my first experiences with a real-time tactics game, and just how much it built and improved upon almost every aspect of Behind Enemy Lines. The game introduced new characters, vehicles, weapons, indoor sections, and movement/platforming elements. What’s more, Commandos 2 is one of the most memorable real-time tactics games for the way it adapts turn-based ideas.

Ideas like overwatch, for example, which become a key component in the game’s many action sequences. The very fact that Commandos 2 has ‘action sequences’ is pretty indicative of how different it is to Behind Enemy Lines – a game where the idea of any prolonged action was pretty much impossible.

But Commandos 2 went way beyond, giving you groups of infantry to command, and using overwatch to create lines of fire during its exciting base defence sections. Considering all of this, I was pretty excited to try out the Switch version of the Commandos 2 HD Remaster.

I was also curious to try out the remaster since it received such a stony reception when it released on PC back in January. The game had some issues with regards to bugs, but let me put your mind at ease, and report that I didn’t encounter any issues of that kind with the Switch version. If anything, it runs very smoothly, and I’m impressed by how the control scheme has been adapted to a dual stick approach – considering Commandos is a heavily cursor-based game.

But before I get into that, some background. Commandos 2 puts you in the shoes of a crack squad of operatives during the second world war. The original game, Behind Enemy Lines, released back in 1998, and became pretty famous for its clever tactical play and legendary voice-acting. The formula was so popular, it even spawned other games we know and love now, such as the Desperados series. 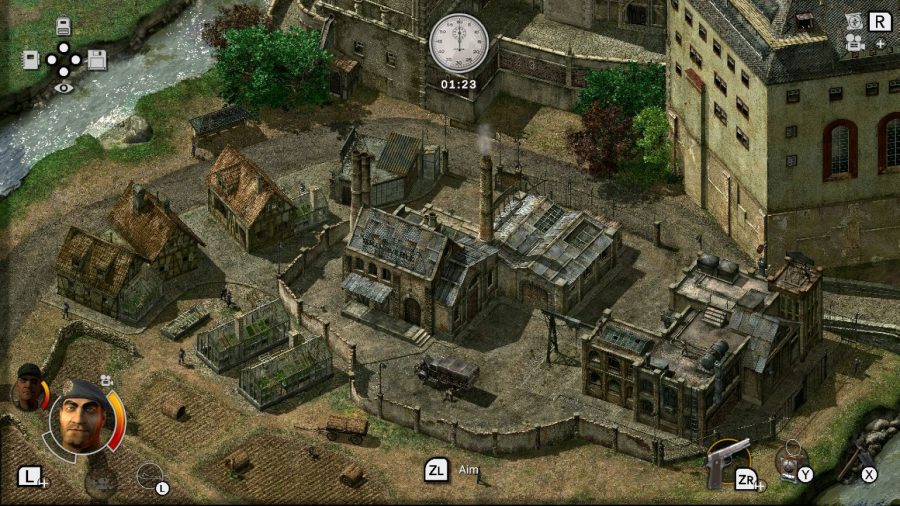 Each of your operatives has a specialist skill. The Spy, for example, can disguise himself with enemy uniforms, the Green Beret can use camouflage, the Marine can dive underwater and use a dingy, and the Driver can use special vehicles like tanks. How you utilise these abilities to complete each mission’s objective is where Commandos’ challenging tactics-based gameplay comes from, as you infiltrate an enemy stronghold.

It could be blowing up a battleship, or stealing top secret info, but the constant in Commandos is that you are always outnumbered and behind enemy lines, so stealth is the best approach. The series is also well known for its gorgeous painted backgrounds, whether a colossal ship hangar, a giant carved statue, or a surfaced U-Boat. Commandos 2 is no exception, showcasing these set pieces in all their glory. 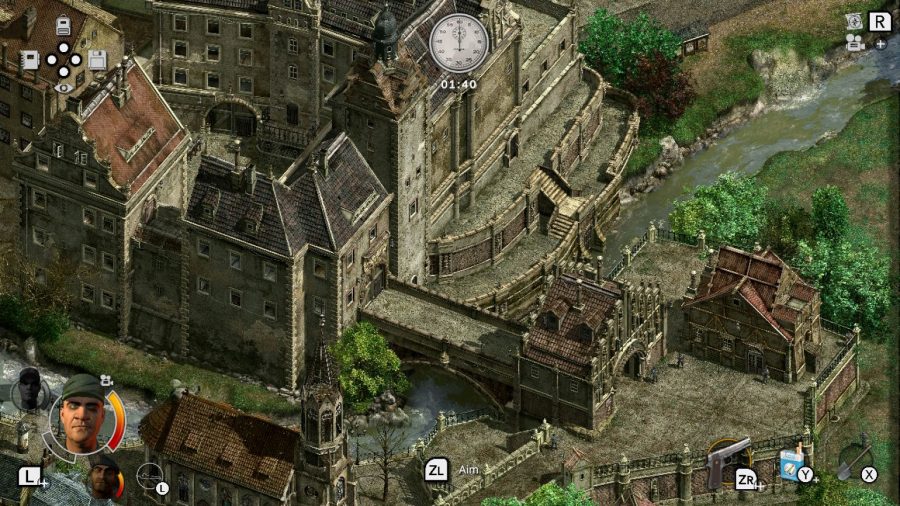 The painted set pieces in particular are why I was partly skeptical about Commandos 2 needing a remaster, considering they don’t really age. But when I went back to play the original I realised that I’d remembered Commandos 2 looking a lot better than it actually did. The HD Remaster is a definitive improvement, and makes the game clearer, and more visually crisp.

The remaster also adapts the control scheme for Switch. It’s a little strange getting used to the lack of a cursor at first, but the changes are well tutorialised, and by the end of the training camp missions I had a decent handle on it. You can also press the tutorial overlay button at any time in case you need a reminder. 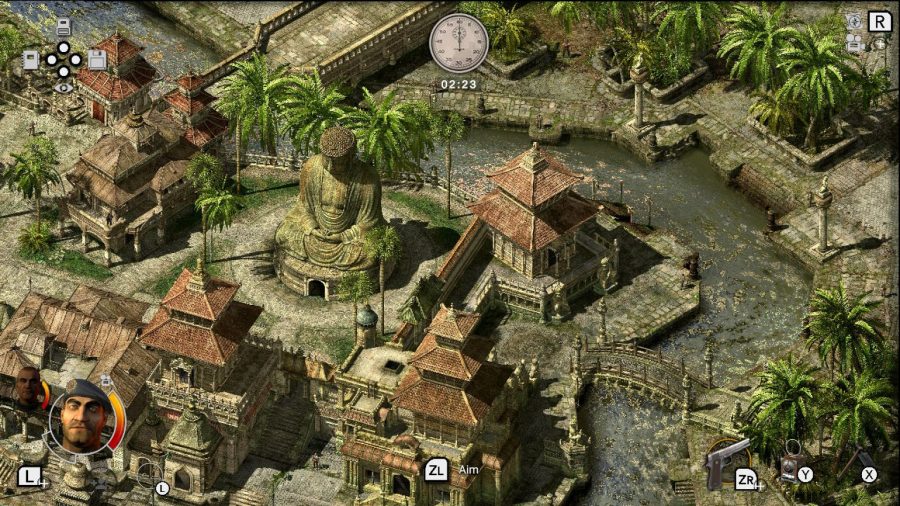 The basic controls centre around using shoulder buttons to cycle between characters, the right stick for camera, the left stick for movement, and the D-pad for quick-save, notebook, character inventory, and ‘enemy-view’ where you can check field of vision – very useful for stealth. The right shoulder button is for using weapons, while Y and X are for items – you can also hold these buttons to select items for slots.

Shooting is another thing that is significantly different, as without a cursor you can’t aim the same way. When you use a weapon, the aiming reticule appears at the farthest point of range, but you can quickly snap between enemies nearby using button presses. This does take the human error out of aiming, and makes it feel a little like you’re a hitman expertly gunning down droves of enemies, but considering the lack of cursor and slow stick movement, it’s certainly the better of the two potential control options. 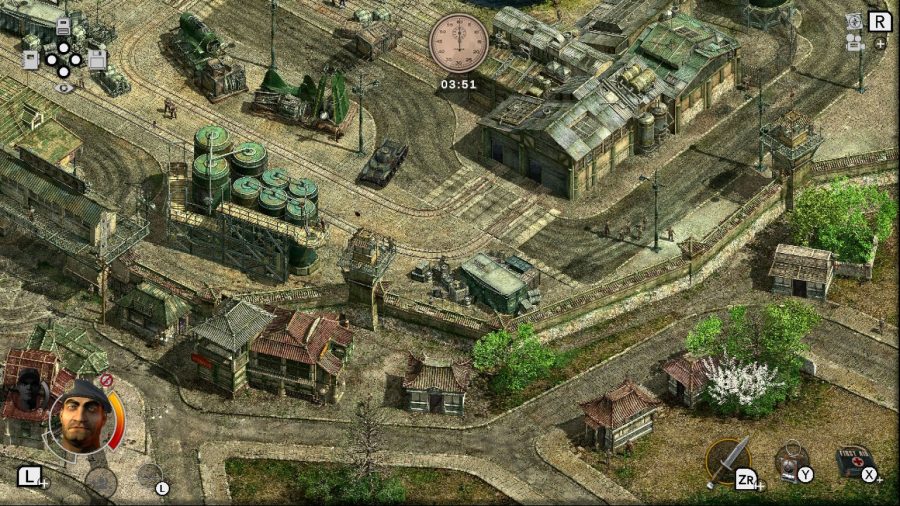 Generally I found using overwatch for the shooting sections was far more efficient, and you can easily activate it by clicking the stick, though I did find this a little sensitive at times. When moving, a stick click will also make you change to sprinting, and on a couple of occasions I did accidentally alert enemies due to sensitivity and got shot quite a bit. But on the whole, I am very impressed with how well the controls have been adapted for Switch.

There are certain inevitable drawbacks. In the original game you could set someone a command to go and perform, then switch to another character while they were doing it. This was especially useful when moving a lot of bodies, or objects. But considering you now have direct control, you can no longer issue cursor commands at points ahead of your operatives. But it doesn’t really impact on play much, it just means things take a tiny bit longer. 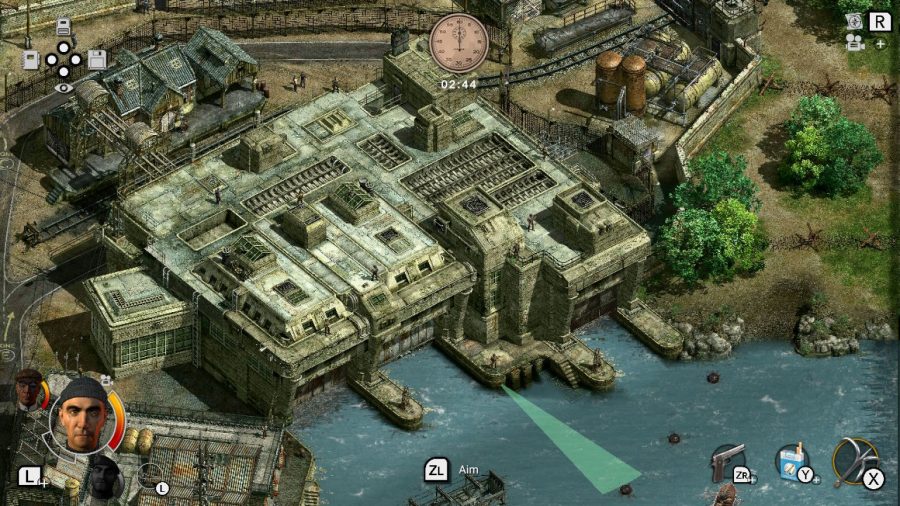 In general I think this is a decent remaster, and the very act of making such a cursor focused game as Commandos 2 work on Switch, is pretty impressive. I do think $29.99 is extremely steep, considering what is actually added to the game, but then again, can you put a price on nostalgia? Can you put a price on seeing a game like you remember it: i.e better than it actually looked? Perhaps not, but that’s for each person to decide for themselves.

While perhaps not vastly in need of remaster, Commandos 2 is still an excellent tactics game, and its improved visuals and Switch controls are a welcome trade for portability