September 9, 2020: Company of Heroes is launching on Android and iPhone, so we’ve updated our review accordingly

Although RTS is one of the most popular genres on PC, there’s been a lot of difficulty bringing those experiences to mobile. Where the titans of the genre measure skill partly in clicks-per-minute, it’s tough to imagine a solid RTS experience that brings that same micro-management to a touchscreen. Improbably, this experience has arrived in the form of a port for a fourteen-year-old classic.

If you’ve got an Android or iOS device, and you love real-time strategy, Company of Heroes might be the game for you. It focuses tightly on World War II tactics, as you control a handful of squads rather than a whole army, as they attempt to take back the hedgerows of northern France in the Battle of Normandy. There’s none of the tedious resource-gathering and base-building that you’ll find in those games more directly influenced by Warcraft. You get more resources by taking objectives, and reinforcing and upgrading your units in the field, as the Germans provide constant resistance.

There are a lot of ways Company of Heroes makes for an ideal mobile strategy game – just by being squad-based, giving orders using fingers, rather than precision mouse clicks, is made much easier. You can easily handle your squads by tapping a few icons in the squad list rather than seeking out tiny gray-brown soldiers on a gray-brown map. You can also use a convenient pop-up wheel to make specific orders.

The controls can sometimes be troublesome. For basic attacks, single taps suffice. Pulling up a selection box to grab more than one unit on the map requires a double-tap with two fingers followed by a drag. Aiming a machine gun emplacement is a double-tap and drag. Placing landmines means bringing up the wheel menu, selecting mines one layer down, tapping and dragging across the area you want the mines, and then confirming the order in a popup box.

Some improvements have been made for the Android and iPhone release, however. The button select and tap assist overlays are two handy options for enlarging icons for squad deployment, or on the mini-map section of the HUD, making them easier to tap. You can enable these modes via the menu. The HUD also now goes partially transparent as you pan across the battlefield. Full details of those changes can be found below:

As a mid-aughts World War II game, Company of Heroes begins with the requisite D-Day beach level, which isn’t the best showcase for its strengths. On Omaha Beach, there’s no opportunity for flanking, combined arms, armor, or much use of tactical cover. It’s a Saving Private Ryan inspired meat-grinder, but not an interesting challenge. Better are the following several missions, which have your paratroopers setting ambushes and overrunning fortifications.

It's a dramatic depiction of zipping airplanes, trundling tanks, and roaring anti-aircraft guns

A high note occurs early on in a challenging defensive effort on a map that you have spent the last couple missions slowly conquering. A massive wave of German armor arrives that sees your forces pushed back to the near point of destruction before your – scripted – reinforcements arrive. It’s thrilling, and later campaign missions become even more exciting, as the game constantly adds new units and tactics to keep you on your toes.

Just as many games of that era that sought to portray themselves as grim and realistic, Company of Heroes features a de-saturated brown and gray palette that while accurate, is not too pleasant to look at. What is impressive is the level of detail wrapped up in all that brown and gray. Buildings and walls crumble realistically. Explosions scorch the landscape. Soldiers fall with puffs of blood. Vehicles lose control, flame out, and skid off the road to blow up. 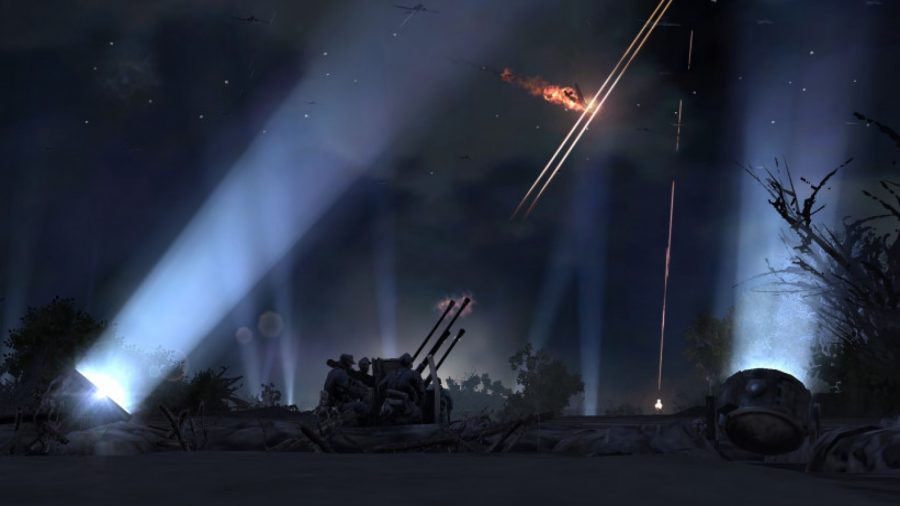 The campaign story is told through highly cinematic cutscenes obviously inspired by Band of Brothers. It’s a dramatic depiction of zipping airplanes, trundling tanks, and roaring anti-aircraft guns, but these scenes are less successful when zoomed in to the blurry camouflage textures covering its soldiers. Overall, the campaign does a good job of giving your participation in the Battle of Normandy significance, always tying your mission objectives to the greater effort.

It’s not Oscar-worthy, but it does the job of keeping you playing for just one more mission. These missions are expansive, with multiple difficult stages spread over broad and detailed maps. One minute you’re responsible for rooting a sniper out of a difficult nest, and the next you’re securing a base, or planning a multi-pronged assault. All these little tasks add up to an experience that is more than the sum of those parts, each street of the map hard-won. 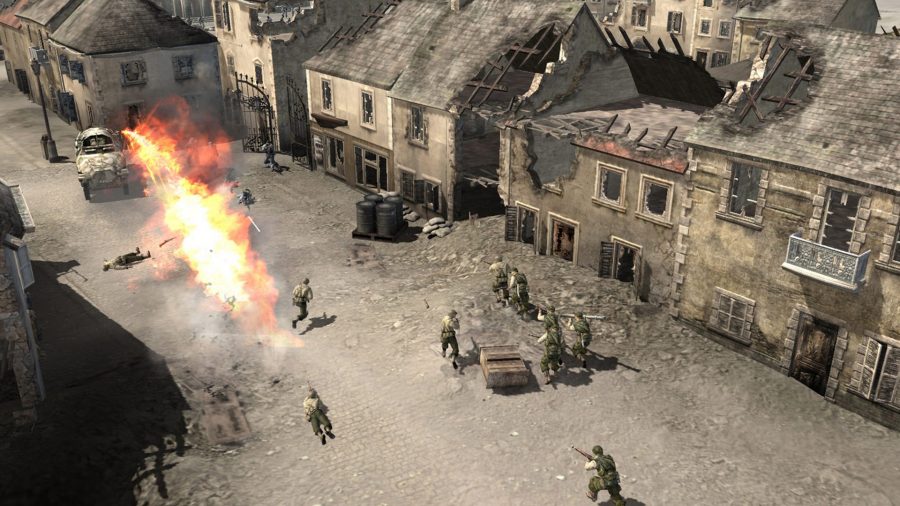 Company of Heroes will set you back $13.99 (£13.99) and the purchase includes just the base game. However, the iPhone version of Company of Heroes is free for any who purchased the game on iPad earlier this year. It is worth mentioning that Company of Heroes doesn’t currently have its Opposing Fronts and Tales of Valor expansions, which will come later as paid DLC. You can, however, download skirmish maps to also play on.

Company of Heroes also doesn’t have multiplayer, though you can still play skirmish mode if you’ve finished everything else. But with such a great campaign, Company of Heroes is an easy recommendation for anyone with Android or iOS device that enjoys real-time strategy. It’s an exciting and unique experience that’s a good fit for mobile play. Now, everyone put Dawn of War II on your vision boards!

You can find Company of Heroes on Google Play and the App Store.