After playing the demo back in 2020, I have been eagerly anticipating the release of the indie RPG Cris Tales for some time now, and I’m not disappointed. From the stunning hand drawn graphics to the imaginative use of the time skipping function, and the magical, fairy-tale-esque story, what’s not to love?

The indie scene has welcomed a surge of awesome hand-drawn games over the past few years, from the beloved Cuphead to the Deponia series, but Cris Tales is truly unique. The art is breathtaking, and is honestly the main thing that drew me into the game. The Columbian roots of the developer have clearly influenced the in-game architecture, resulting in a vibrant, neo-gothic style. The illustrative nature of the 2D graphics lend well to the story-book narrative, enhancing the otherworldly, fantasy feel and whisking you into Crisbell’s stunning but dangerous world.

From the offset, you are plunged into a world of talking frogs and soft-spoken townsfolk, as you embark on a magical adventure to save your home from terrible threats using your new-found time-skipping abilities. When you’re first introduced to this mechanic, your screen is split into three to show you the past, present, and future. Through this you can see both a history of the town and a possibility of what will be. You see that the buildings will be affected by a horrible rot called Ash Blight, which will destroy them from the inside. After some narrative puzzle solving, you are required to choose which house to save. This sets the foundation for many upcoming decisions you must make in the future, which will often feel tough but rewarding as you can directly see the outcome of your actions.

The game is composed of an overworld map and multiple locations that unlock as you progress. As you explore, in classic RPG style, you encounter random battles with unseen enemies. This feature in itself is not a problem, but the Switch version has long load screens, and it can become a bit of a slog when you run for ten seconds, hit a thirty second load screen, engage in a short battle, then go back to another long load screen. 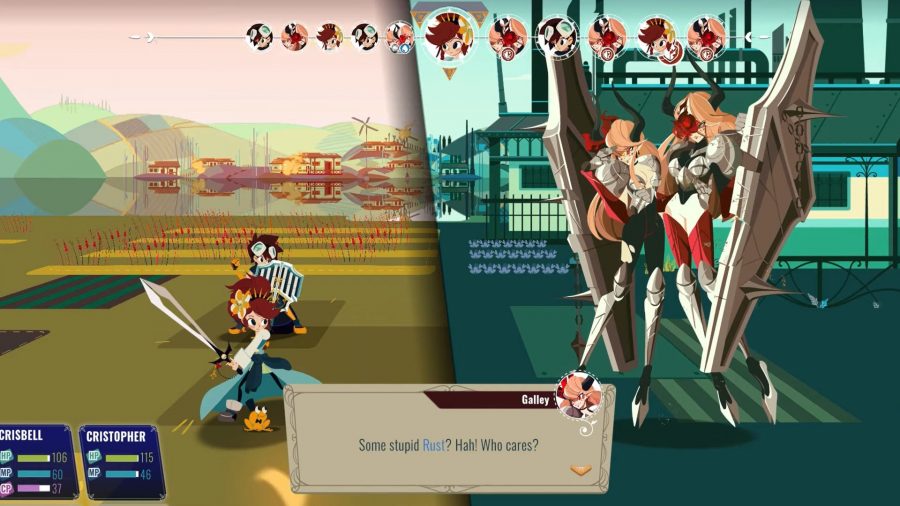 Combat is turn-based and makes good use of the time skip mechanic, pushing you to utilise your puzzle solving and strategic skills in order to get around tougher enemies. For example, one of the first big fights you will find yourself in is against the Volcano Sisters, who have an impenetrable shield. You must use Christopher’s water bubble ability to give them the soak debuff, then use Crisbell to send them to the future to rust their shield, lowering their defence. These mechanics allow you to play with some really interesting tactics and encourage you to use your imagination in a fun and unique way.

There is a focus on timing in battle, where you must hit buttons at exactly the right moment when attacking or blocking. The rumble on the joycons gives you a good idea of when to execute a second swing on an attack, but learning to time the blocks and parries can be a little more difficult. It’s not always easy to tell when an enemy is about to land a hit due to the 2D art and layout of the battles, and even when you do block or parry you usually still take some damage, which can make repeated engagement sometimes feel tedious and frustrating. 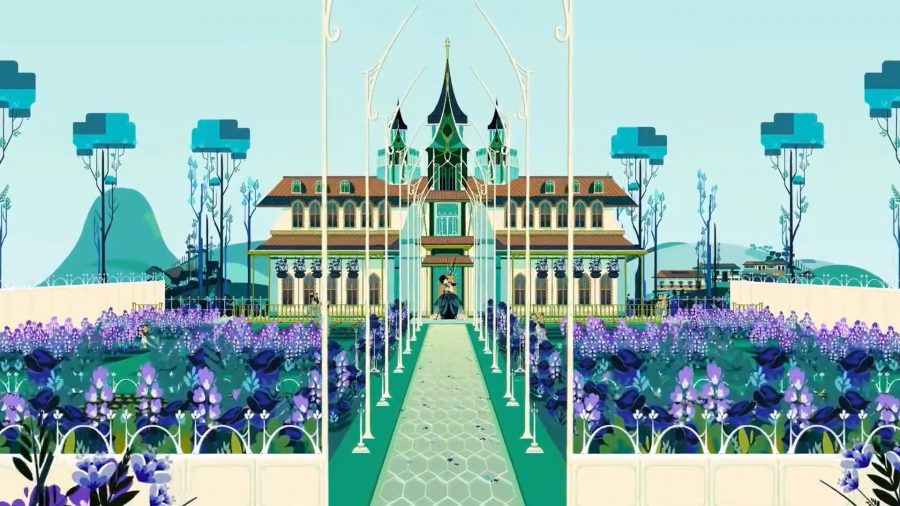 Early in the game, you find yourself deprived of items, especially curatives, which is pretty punishing if you aren’t the quickest at blocking. You don’t regenerate health, mana, or CP between battles, so this lack of items will push you to plan ahead – you must be sure to gather as many items from chests as possible, and be smart when deciding whether to flee in order to reserve your power, or stand your ground and farm XP.

The soundtrack is breathtaking, with swelling orchestral scores that truly compliment the fantastical nature of the game.

There are two ways in which you can save: either on the overworld map, or by locating a patch of soil and planting a magic seed. The latter also offers an option to rest if you have a tent in your inventory, which allows you to gain health, mana, and CP back. Tents and seeds are single-use items, so you need to make sure you always have at least one of each on you. Again, this is punishing for people new to the genre, but does add an interesting challenge and encourages you to be mindful – especially if you want to avoid being forced to load a save and lose progress if you die.

I won’t delve too far into the story, as it is definitely a highlight of the game that is best experienced for yourself. The dialogue is fun, the characters are likeable and beautifully designed, and the sense of camaraderie in your little group grows as you continue your adventure. Plus, who doesn’t love a little talking frog in a tophat? The soundtrack is equally as breathtaking, with swelling orchestral scores that truly compliment the fantastical nature of the game. 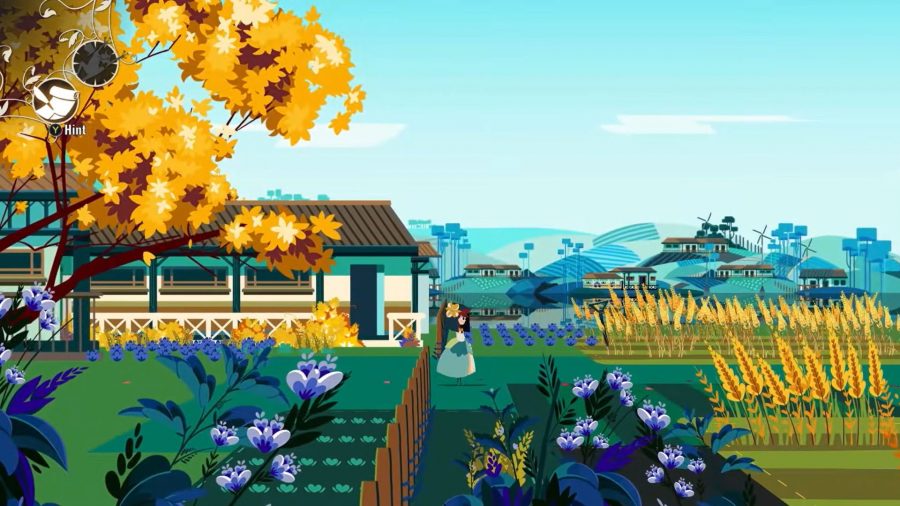 As a stunning love letter to JRPG titles such as Final Fantasy, Chrono Trigger, and Persona, Cris Tales is a real gem, and an exciting entry in the genre. With a few minor tweaks to combat, item distribution, and load times, it would be near perfect in my books. Now, if you’ll excuse me, I need to go see a frog about a stolen rose…

Cris Tales on Switch is a unique gem of a game with stunning visuals and music, interesting mechanics, and a beautiful story. It is only held back by load times and its somewhat frustrating combat.