There are plenty of games I find addictive. Take Don’t Starve, for instance; once I start that cycle of day-by-day survival, exploration, and escalating attacks by monsters of increasing deadliness, I’m totally hooked. It’s the same for the Total War games; I just keep clicking that end turn button, and keep telling myself the next will probably be the last.

But I don’t think anything comes close to Cultist Simulator. This card-creating cult management game is all about resources, as you navigate the back-alley dealings of an occult organisation, trying to avoid unwanted police attention, and getting your brain fried by unfathomable cosmic entities – all in the hopes of reaching ascension.

It’s a fantastic setup, but its most addictive quality is its clocks. Similar to how they work in many tabletop RPGs, Cultist Simulator uses timers to tell its story and create escalations. These clocks are basically the microcosm of that ‘one more turn’ idea in strategy games, as you manage multiple as if you’re spinning plates.

And spinning plates is the perfect metaphor for Cultist Simulator, since inevitably, one always comes crashing to the ground, as you either lose your mind, are arrested by the authorities, or you simply submit to existential fear. That is, unless you ascend first. Cultist Simulator is a guts and glory race to godhood – a live-or-die battle of escalating complications, as you try to hold your ever-more disparate organisation together.

But first, the basics of play. In Cultist Simulator you have a series of action boxes: study, work, dream, talk, and visit. By placing cards into these boxes you create other cards, which you then combine to create even more new cards. For example, if you put a health card in the work box, you perform menial labour for a low wage, but if you try putting passion in there, you can paint instead, using even more cards as your inspirations. Want to get stronger? Menial labour produces vitality. Maybe study two vitality together? And now you’re stronger than before, and have more health.

Cultist Simulator centres around these experiments, working out where you can place cards, and what they produce, while also narrativising these combinations with text. If you imagine you’re climbing the side of a house of cards, gradually working your way up a chain of rarities built on the back of previous combinations, you’d be close to what the game is. 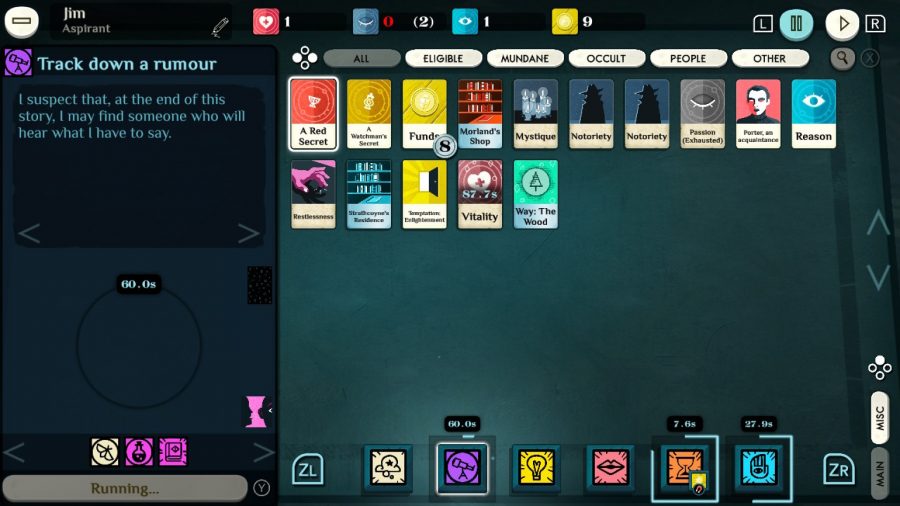 In terms of story, these actions take many forms. You can create a cult, deciding which lore you wish to pursue. You can recruit members, adding them to the organisation, sending them out on expeditions, or to deal with unwanted attention. You can visit locations or navigate the dreamscape (known as the wood), study occult lore to increase its potency, and complete commissions for wealthy patrons. You can even summon cosmic entities. Cultist Simulator is a rabbit-hole, and how far down you go depends entirely on you.

The dream realm of Cultist Simulator, otherwise known as The Wood, is still such a cool addition to the game. In the original it acted like a secret board hidden under the main one, like a world concealed beneath the surface of ours.

It’s also a game that has an excellent mobile port, allowing you to move cards around the board and organise your ever-expanding occult empire, as you work out what each card is, and gradually categorise them into sections. The mobile and PC versions really make you feel like a crackpot conspiracy theorist, as one box transforms into two, and you eventually end up with this sprawling web of members, lore, locations, contacts, artifacts, and personal qualities. That port was also touch screen, the perfect form for any card game, letting you easily sort and organise. 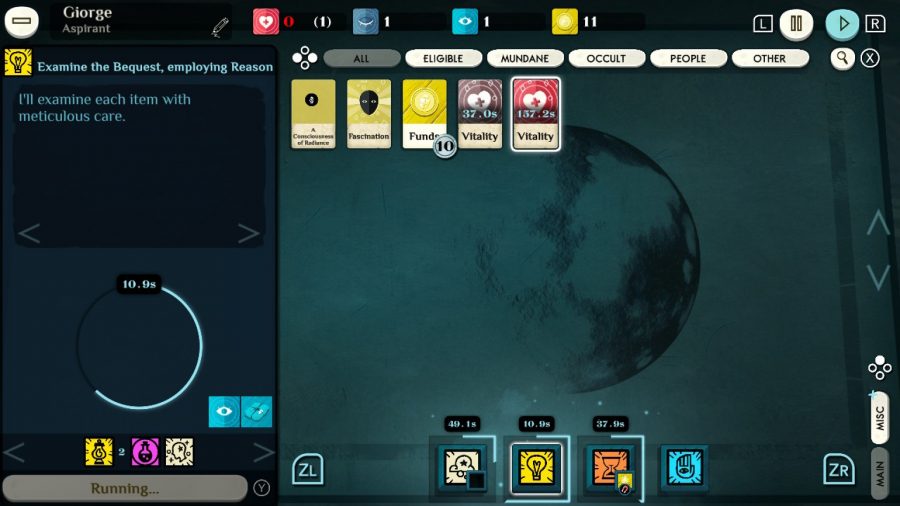 But a good deal of that is definitely lost in this Switch port. In this version cards become part of a big pile, and are pre-categorised, meaning you know what they are right from the outset. It has none of that same sense of personal organisation, either. In the original someone could look at your late-game board and have no idea what it was, whereas it made perfect sense to you because you built it.

I also found the action system extremely confusing. Basically action clocks sometimes spawn other clocks like side-effects. These are the most important in the game, since they are generally what leads to your death, as you run out of health, or accumulate too much dread, fascination, or notoriety with the police. The issue with the Switch version is that these clocks are displayed on a second layer, which you have to keep checking if you don’t want to accidentally die without knowing. It took me a while to even realise this second clock layer existed, and I genuinely thought the fact that some clocks weren’t appearing was a bug.

However, one great feature that isn’t in the mobile port is the shoulder button which allows you to quickly pause the game – which you’ll be doing a lot – without having to touch the screen: a really useful addition. The control scheme for this Switch version mainly centres around shoulder buttons, as the other set cycles through possible actions, while the left stick is used for selecting cards to go in them. It’s a fine system, but it doesn’t feel straightforward – an extra learning curve added to a game which is entirely made up of learning curves already. 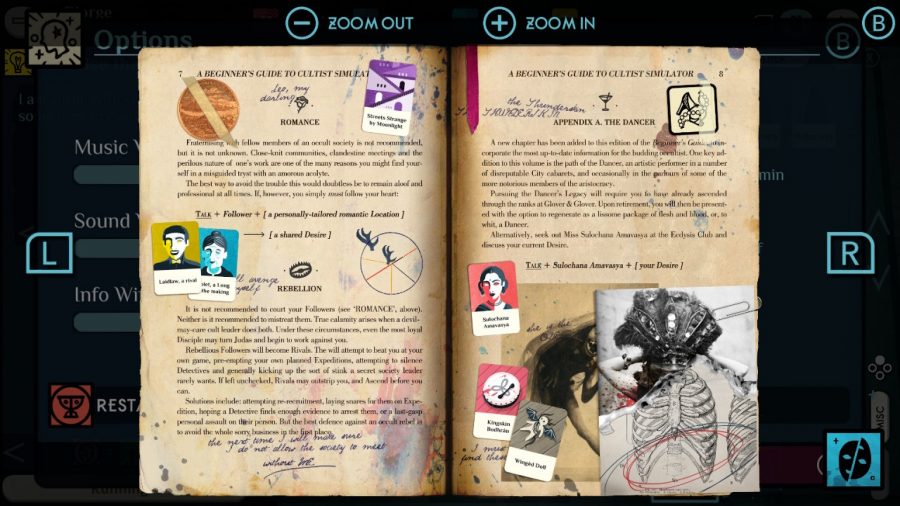 I love Cultist Simulator, it’s one of my favourite games, period, but it does feel that in having to conform to Switch, something vital has been lost from the game. Don’t get me wrong, if you have no other platform to play this on, I’d definitely recommend playing it if you like card games and occult themes. Cultist Simulator is a great example of just how tabletop game design can be used to tell massive stories, and add all of these layers of complexity. I’ve got 50 hours in the game, and there are still some things I haven’t seen yet.

But in pre-categorising the cards, and taking away that element of personal organisation that exists in the original, the game just feels a lot less mysterious and expansive. I also think the control scheme will make an already complicated game even harder for new players to approach. Cultist Simulator is great, but if you can play the mobile port instead, I would most definitely recommend it over this Switch version.

In having to conform to Switch, it feels like something important has been lost in Cultist Simulator. I do, however, thoroughly recommend playing it on mobile or PC