They say the best things come in small packages, and I’ve always appreciated that sentiment. Early on I loved miniature toy sets like Mighty Max, I love a tiny Lego set, and a bonsai plant is my idea of heaven. Something about a miniature but perfectly curated, and manageable experience is so satisfying.

Death’s Door is a perfect encapsulation of this theme in video game form. A short but expertly crafted experience that hides satisfying secrets in every corner, instead of pushing to be bigger and longer, then ending up bloated where it needn’t be.

Playing as a crow who reaps souls, you’re chasing your latest bounty – a soul ready to pass on – when plans go awry. Chasing this soul leads you down an unexpected path, and a mission to find three souls large enough to fix your problems. And it’s within this simple premise, that Death’s Door crams an expert experience that’s sublime from start to finish.

Death’s Door is an isometric action game from developer Acid Nerve, who previously developed Titan Souls, a game slightly more overt in it’s adoration of the Soulslike genre. In Death’s Door your character, the Reaper, collects souls from enemies and uses them to advance both abilities and weapons, so Dark Souls DNA definitely still informs a lot of the gameplay, but it’s done with enough personality and charm to forge its own path. 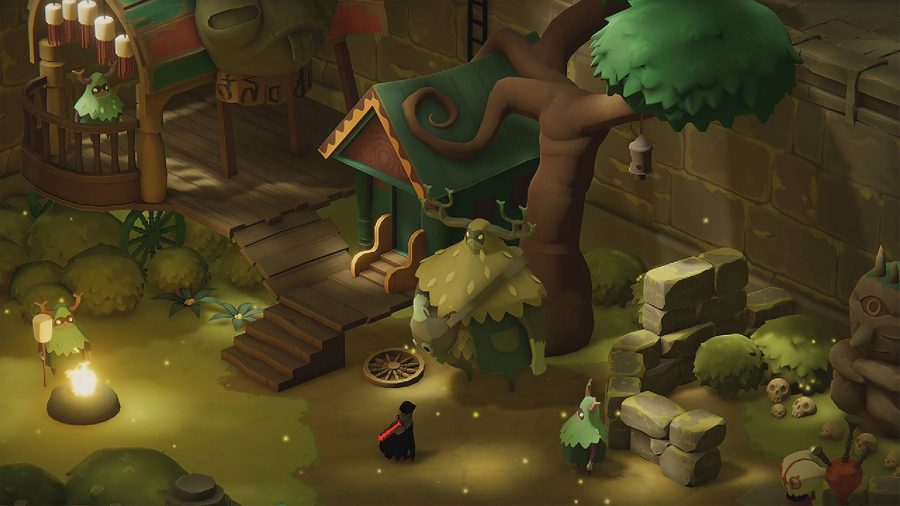 What Death’s Door excels at from the first instant is game feel. The movement speed feels responsive, a dodge roll feels just right, and the swing of your sword feels electric. The red glow of your movement is animated so perfectly, the instant you press the attack button, a satisfying wave of red energy is left behind, and it only gets more satisfying as you increase your powers.

In between finding the three giant souls, you explore dungeons and labyrinths, all while mowing down hundreds of enemies. What you discover as you explore though, is that this world is so smartly realised, every few minutes of exploring in one direction leads to unlockable shortcuts that make the entire world more accessible. And you need those shortcuts on your way back to Death’s Doors many bosses.

Alongside the main giant souls, there are so many smaller bosses and arenas with enemies to beat. Thanks to both the meticulous combat, great enemy design, and some wonderful animation, fights flow into a wonderful dance that feels overwhelming at first, but incredible to master. It’s so great to be knocked on your ass a few times, only to finally understand the attack patterns on display and be able to weave in and out of the enemy’s movements and finally destroy your gargantuan target. The bosses all impress throughout the 9-10 hour campaign and offer a decent challenge that always feels tough but fair. 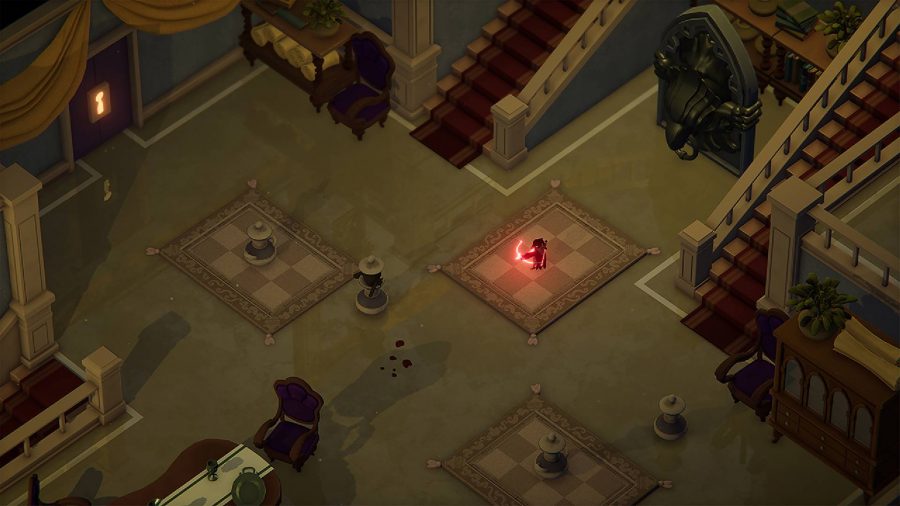 There’s also a wonderful sense of scale, thanks to the size of your tiny crow. You’re a meagre part of this interesting world, and the game makes you feel it constantly. While regular enemies match your stature, bosses tower over you menacingly, with even a living castle wall being an early opponent for your tiny sword. Exploring the depths of each dungeon only adds to this, as areas I initially thought to be fairly contained opened up beneath me to reveal huge areas littered with interesting secrets and enemies to best.

Speaking of secrets, that’s one thing Death’s Door also nails. If you walk into a room with nothing in it, look again. Not an inch of this game’s map is wasted, and by looking at your surroundings and experimenting you’ll find the many crystal shards, piles of souls, and shiny things just waiting to be discovered. Every room is cleverly laid out and almost everything you see is available if you can figure it out. It feels incredible to solve some of these puzzles and adds a nice miniature progression scale alongside the more obvious additions, like new weapons and abilities. 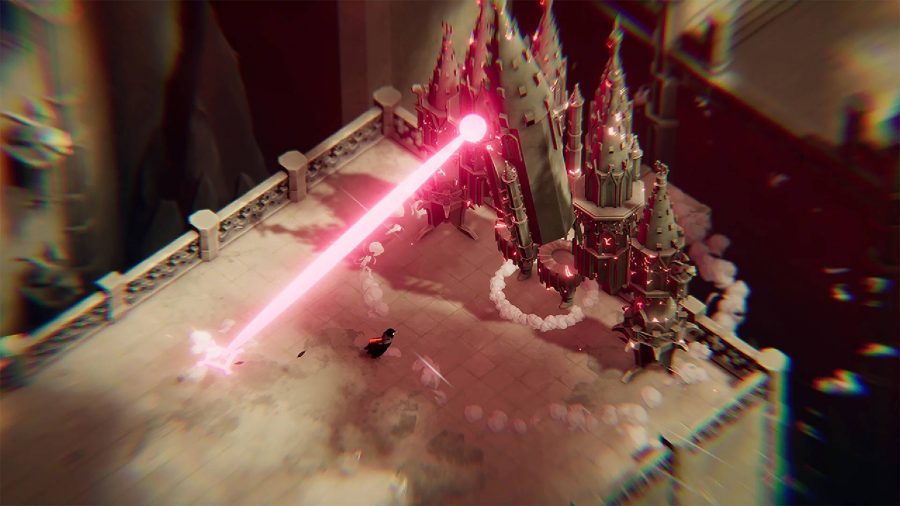 There’s a certain amount of linear progression, where you slowly unlock items and abilities that give you access to new areas as you explore. An early spell gives you the power of fire, so you can burn down cobwebs and generate energy in coal-powered furnaces to uncover some of the aforementioned secrets.

It’s also worth mentioning how great these new abilities feel. You unlock new attacks and advancements to your movement similar to a Zelda game. They change both how you battle, and also how you interact with the world. Every area you return to unfolds further with each new power, revealing even more secrets tucked away in areas you hadn’t even considered before.

Death’s Door repeatedly peels back layers to reveal even more amazing secrets in a world that initially feels small. While it may not be the biggest map, it’s so perfectly and richly populated with things to find, I wouldn’t want it to be a single inch bigger, and each new ability only increases your mastery over this domain.

Now, everything I’ve mentioned so far has been fairly mechanical. Puzzles are satisfying, combat feels great, and everything else around these just flows. But where Death’s Door ascends into the higher end of games is how the presentation brings it all together. This is simply an absolutely gorgeous game in motion, with incredible animation and smart visual design helping to fully realise this world and its characters.

From the Urn Witch’s mansion with its cosy fireplaces and endless dungeons filled with failed experiments, to the dark corners of The Forgotten Depths and beyond. Every area has subtle details like cobwebs, mushrooms, and statues littered throughout telling the story of the environment you’re exploring.

Death’s Door looks absolutely fantastic on Switch, seemingly uncompromised in its move to the platform, and runs at a stable framerate throughout. Even when the game gets hectic with multiple enemies and projectiles, it runs perfectly and never gets in the way of the action. Meanwhile, the sublime soundtrack absolutely needs to be addressed, with a haunting piano-led score that perfectly suits a tale of death and decay in a magical world. 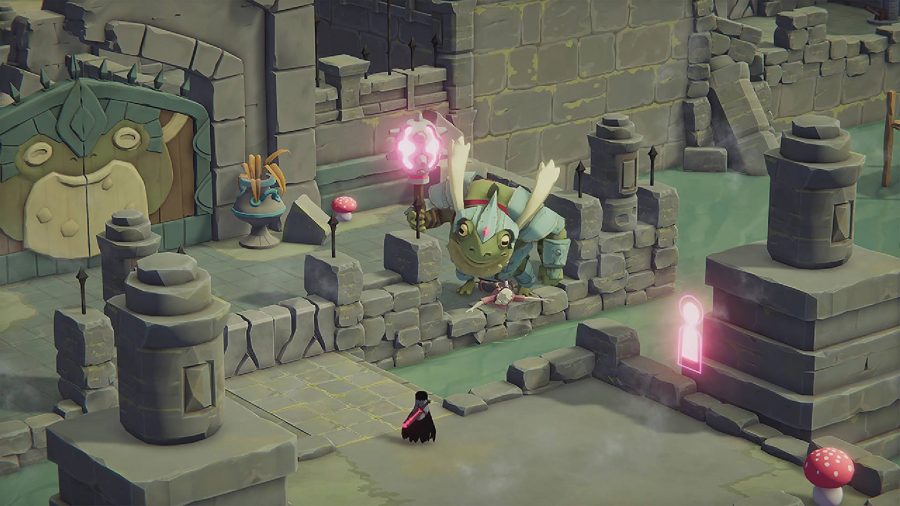 While I’d heard good things all year, I wasn’t prepared for how incredible Death’s Door is. Mechanically, it feels almost perfect in both its action and its puzzles, with progression constantly sprinkling in new abilities to master and greater foes to beat. The game reveals itself to you repeatedly with secrets occupying every possible inch of space, and the action ramps up perfectly as you master the crow’s attacks and items. It’s all over in about ten hours, or slightly more to get 100% and the secret ending, but this miniature masterpiece is a perfectly curated action game and one of the best Switch games of the year.

With a moody map just begging to be explored, satisfying secrets in every corner, and some immensely rewarding combat that pushes you to your limits; Death’s Door is a sublime action game wrapped in an amazing well realised world