I’ll be the first to admit, despite being a fan of the genre, I’m not particularly skilled in the world of platformers, yet I couldn’t wait to sink my fangs into the irresistibly unusual world of Demon Turf. With its striking blend of 2D and 3D, a colourful cast of sassy characters, and its unique and varied control scheme and levels, it definitely didn’t disappoint.

Demon Turf is an ambitious little indie platformer from developer Fabraz, published by Playtonic Friends, that reads like a love-letter to the classic N64 and PS1-era games of the genre.

The narrative, as suggested by the name, revolves around an all-out demon turf war. You play as Beebz, a spunky young demon (well, 1,000 years old, but that’s nothing in demon years) with a whole lot of personality. She’s sick to her teeth with how she’s treated by the demon king, and after he taunts her in her dreams one night, she sets out to put him in his place – for real this time.

Beebz is joined by a whole host of memorable characters, with unique designs and styles. The voice acting is great, and the story is fun but simple. Everything from the aesthetic, to the funky soundtrack and bite-sized levels, feels like an early 2000’s Cartoon Network show. I have to say, Beebz also reminds me a bit of Violet from Cel Damage Overdrive, which gives me an overwhelming urge to dust off my PS2. 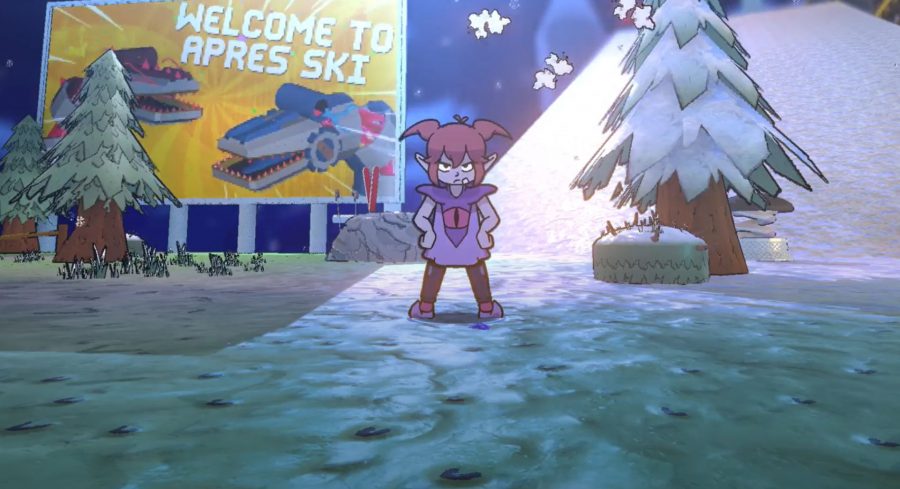 Your mission is to take Beebz through multiple levels, all connected by a Mario-style hub world, as you gather batteries, beat turf bosses, and claim their land as your own, all with the goal of overthrowing that pesky, snarky Demon King. This simple plot does the game heaps of justice, as it feels reminiscent of shows like the old Power Puff Girls, and allows you to dive in at any point, it gives you the freedom to play the levels in whatever order you want – which is just perfect for the Switch.

The highly stylized visuals are gorgeous, varied, and creative. Everything has its own unique flavour, that’s somehow both nostalgic and fresh at the same time. Platforming as a 2D sprite in a 3D world naturally made me curious about how depth perception would be handled, and it did take some getting used to (especially as it’s something I personally struggle with anyway). But, as the game repeatedly reminds you, your biggest asset is Beebz’ shadow, which helps you get a strong sense of where she is most of the time. The sooner you get to grips with this, the sooner the game feels more natural, before eventually, you forget it was even an issue to begin with. 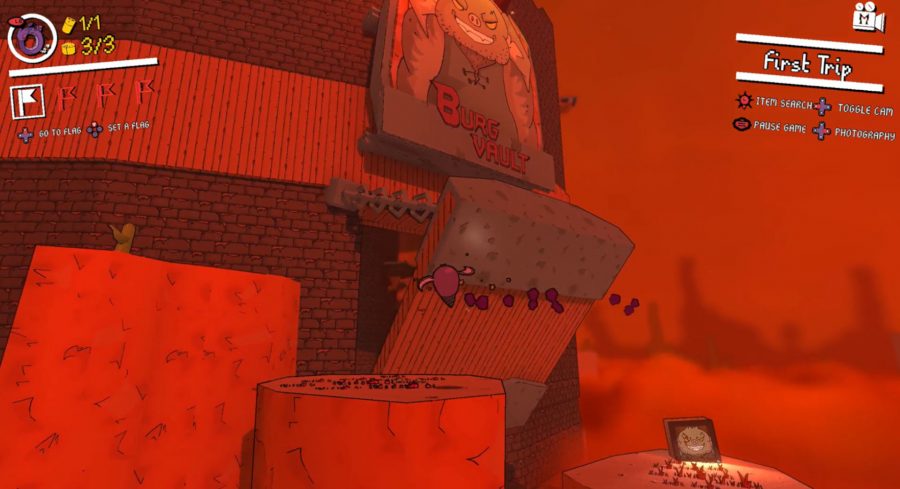 While you may feel a bit bombarded by the seemingly complex control scheme in the tutorial, Beebz has a relatively simple moveset that is enhanced with lots of move combinations, and a kit that opens up as the game progresses. It can take a little time to get used to the different movement combos, but these become second nature over time. Whether you’re transforming into a bat during a double jump, swimming around as a creepy cute squid, or doing a ‘rollout’ as a speedy snake, there’s some great variety to the visual style and feel of the gameplay. The input is responsive, smooth, and comfortable both on the handheld Switch and with a controller.

It’s a fun-packed, solid platformer with heaps of personality and a huge amount of content

Demon Turf offers the option between auto or manual camera, though the few times I tried auto, it had a tendency to shift mid-jump or while walking on a thin platform, causing me to misstep. Sometimes the camera is difficult to angle just right, especially when you’re hopping between moving or crumbling platforms around corners, and can be frustrating during combat, as you find yourself dancing around 2D enemies, trying your best to aim.

Movement can feel a little weightless and slippery, which is likely due to the floaty aesthetic of the game. While it’s great fun fluttering from platform to platform as bat-Beebz, you may find yourself stumbling off an edge, then have to panic jump in an attempt to save yourself. This could use a little fine-tuning, but is overall a pretty small gripe that I found myself adjusting to as I continued to play. 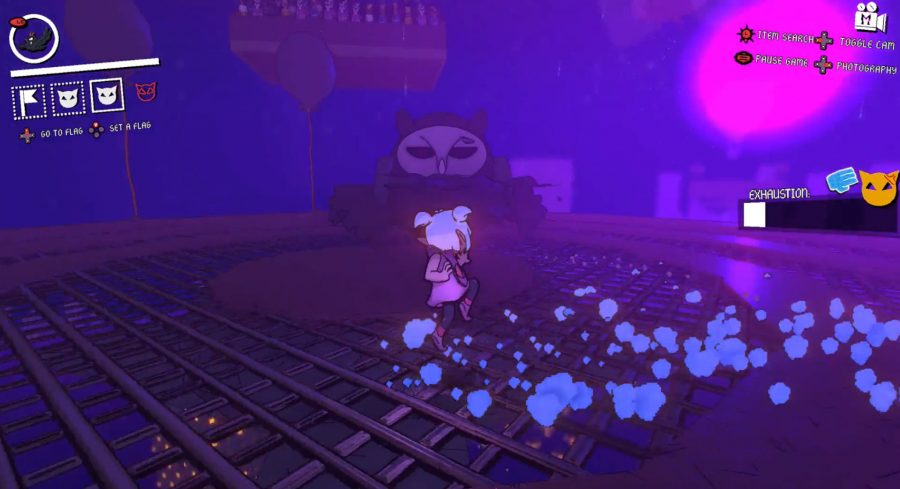 Combat is underwhelming, and sometimes a little irksome. With your main attacks being your spin (which is otherwise used to extend your glide), or your charge punch, both of which are tricky to aim and take a while to execute, leaving you relatively open to attacks. This left me frustrated and tempted to skip over battles where possible. But considering the game is not particularly combat-heavy, aside from boss battles and the occasional pathway blocked by a combat challenge, this isn’t enough to take the fun out of the overall experience.

The game focuses mostly on platforming, with some collectathon elements. Though grabbing the required items doesn’t feel like a chore as it does in a lot of other platformers. Instead, the goodies you snag feel well-spaced out and more worthwhile, as they either unlock new areas or give you the opportunity to unlock character upgrades and other bonuses.

Demon Turf offers a unique checkpoint system, where you can choose to put down flags where you see fit, so if you’re staring down a daunting task, you can plop one down before you give it a try. But the number of flags you can place per level is limited, creating a new challenge – you’ll have to be mindful of where you put them down, if you want to avoid spending the last half of the level with no checkpoints. 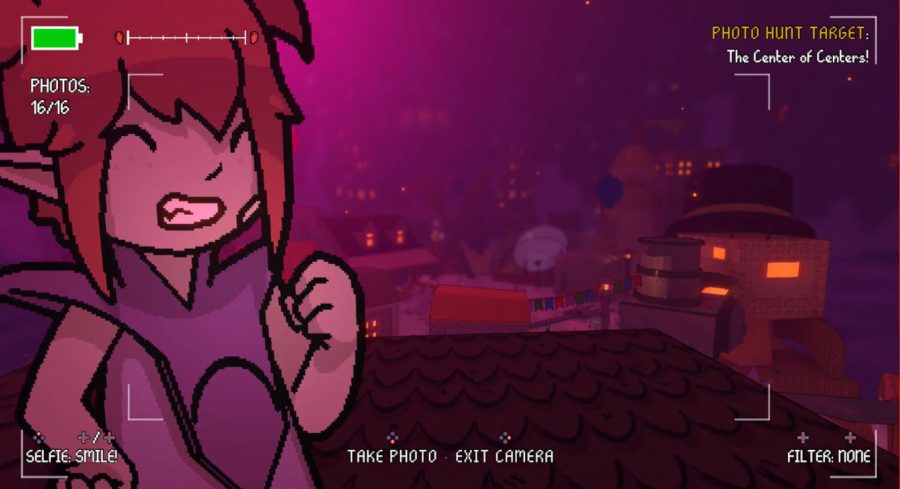 There’s plenty of visual and mechanical level variety, with loads of different settings. When a level is complete, it undergoes some pretty big changes, allowing you to go back and take on new challenges, making them truly worthwhile to revisit. There are miniature hub worlds, optional quests, games like Demon Soccer Golf, and the super fun (and addictive) Pictobox photo quest. There’s always something fresh to do, which offers some great flexibility in gameplay and prevents the main storyline from becoming stale – especially if the platforming is getting your blood pressure up.

Finally, the soundtrack. I’ve mentioned the brilliant voice acting, but the music is just as great – funky, fun, and perfectly fitting with each of the level’s themes. The sound effects are also great and well balanced, and overall bring even more life and personality to this great little title. 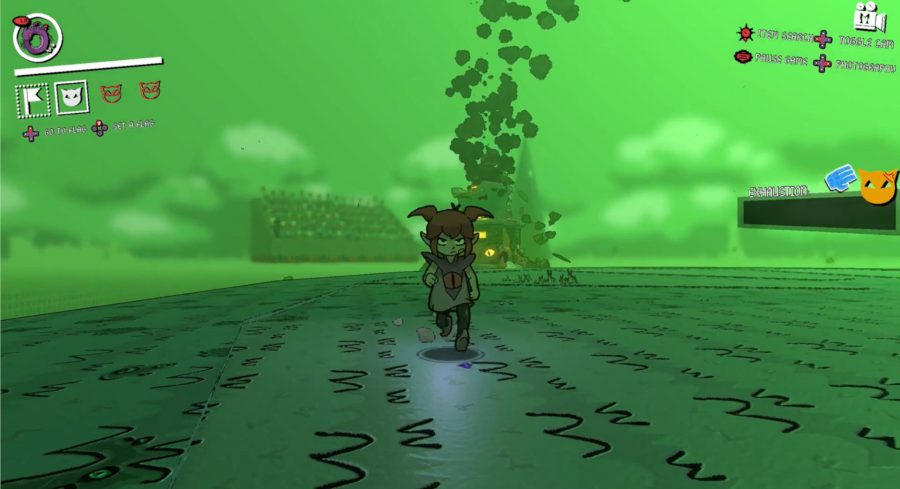 In conclusion, I quickly found myself falling in love with the world of Demon Turf. Though it has a few weak spots to the tune of combat and some minor control issues. It’s a fun-packed, solid platformer with heaps of personality and a huge amount of content for a small price. If you’re looking for a light-hearted challenge that calls back to the platformers of old with a modern twist, then Demon Turf on Switch is the game for you.

A solid little platformer with a striking visual style, heaps of personality, and plenty of content to keep you busy. Demon Turf is a love-letter to the genre, and is well worth your time.