Chances are, if you’re reading this review you know what you’re getting yourself into with Doom Eternal. This hellishly fast shooter launched across PC and consoles back in March 2020, and has only just arrived on Nintendo Switch in all its gory glory. As such, I’m not going to go too deep into critical analysis of the actual game in this review. Instead, I’m going to focus primarily on how it plays on Switch.

I will, however, give you a basic overview. Doom Eternal is a direct sequel to the 2016 reboot, picking up wherever the hell (teehee) that one left off. I say that because storytelling isn’t Doom’s strength. In fact, it’s a borderline nuisance in Doom Eternal. During the myriad cutscenes, I found my eyes glazing over at the sheer dullness of whatever the cast of characters were yammering on about.

Similarly, I found myself completely ignoring the various notes I picked up as I explored the diverse environments. This is unusual for me, a guy who devours entire books in the likes of The Witcher 3 and Skyrim. I bloody love some lore, but Doom’s left me cold.

The complete opposite can be said of the action, which is, for my money, the best of any modern first-person shooter. You’re encouraged to never stand still, blasting away at the various foes with whatever weapon you have at your disposal – and there are a lot more of them this time around.

In fact, I’d argue that there’s far too many, and that swapping between them while charging around a battlefield full of monstrous enemies is as counter-intuitive as tapping your head and rubbing your stomach at the same time. It lacks the purity of the 2016 original, and many weapons end up neglected, feeling like filler as a result.

But the enemies are as varied and brilliant as ever. Much like in Dark Souls, you have to adapt your approach on the fly, using the various intricacies of your arsenal to hammer each enemy’s weak spots. There is a bit of cognitive dissonance though, like using your precision scope in the heat of intense combat. It just doesn’t feel natural to stop and aim in Doom. 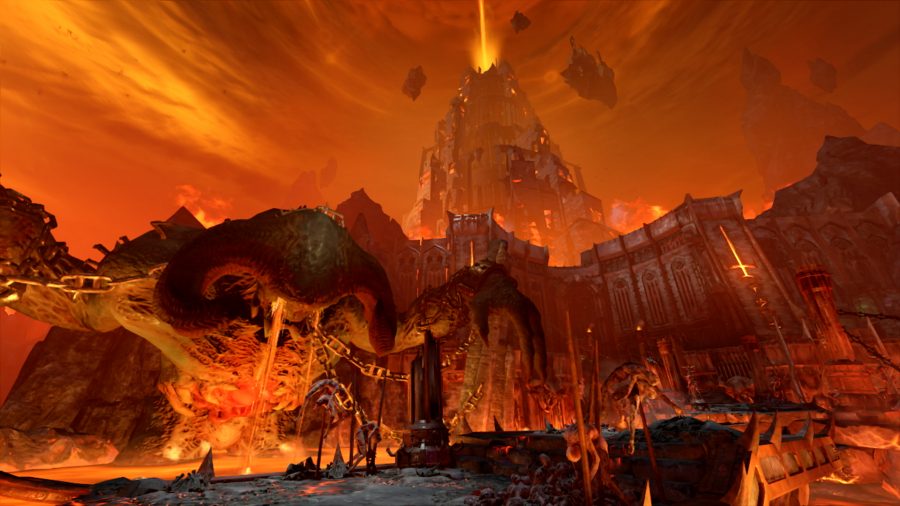 Speaking of unnatural, let’s talk about the platforming sections. I admire id’s commitment to breaking up the gunplay a bit, but those platforming sections are not the solution. At best they’re a minor nuisance, but, at worst – and this is, sadly, more often the case – they’re borderline unplayable. Much like the story, Doom Eternal would be a much better game without them.

But I said I’d focus on the Switch version in particular with this review, and I’m not one to break promises. Ultimately, it’s another win for Panic Button, and sits nicely alongside other ‘impossible ports’ like the original Doom, Wolfenstein 2, and Warframe.

Naturally, corners were cut to squeeze the game onto Switch, which is a quite considerably less capable platform than PC and the other consoles. It’s blurrier, the resolution, and particularly texture resolution, has taken a hit, and, perhaps most importantly, it runs at 30fps rather than butter-smooth 60fps. 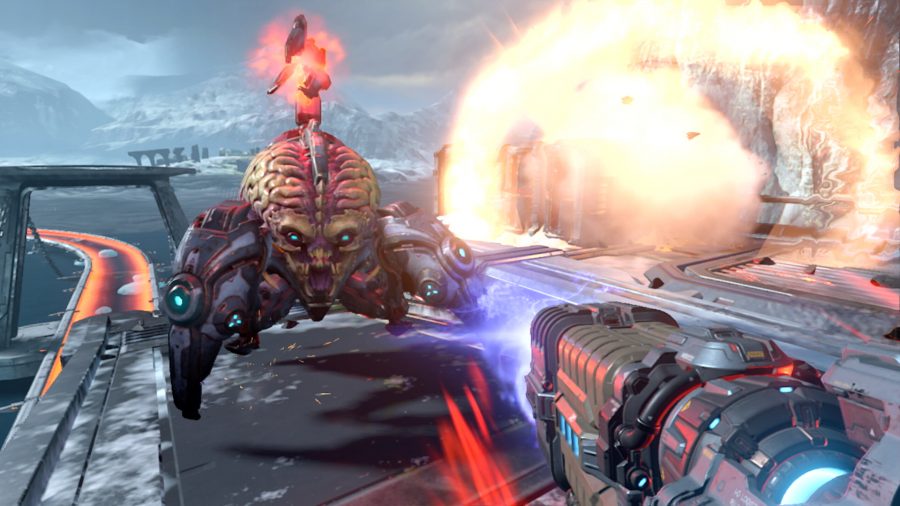 However, I didn’t find it to be an issue, and it didn’t impact on my enjoyment. It helps, of course, that it’s a locked 30fps. I can only remember a single moment where the framerate dropped, and it was noticeable as it’s so rare. The environments are just as breathtaking too – the giant monsters of hell wandering around the scenery, and the dead remnants of the war are just as impactful. In fact, they tell the story way better than any of the dreadful cutscenes. Sorry – they really are bad.

My only complaint about the Switch port in particular are the controls. The JoyCons are infamously terrible where precision is concerned, and I found it basically impossible to find comfortable sensitivity settings. It’s an issue I had with the original Doom too, and I ended up buying a Pro Controller, which resolved the issue. It’s a weird one though, as I play other shooters on Switch with JoyCons without issue.

Where Doom is at fault though, is in how much it asks of you during combat. Swapping between the sheer number of weapons on the fly feels incredibly cumbersome, and my failure to do so led to more than a few deaths. This, coupled with the rather intense difficulty, made me feel more like a bad juggler than the Doom Slayer itself. 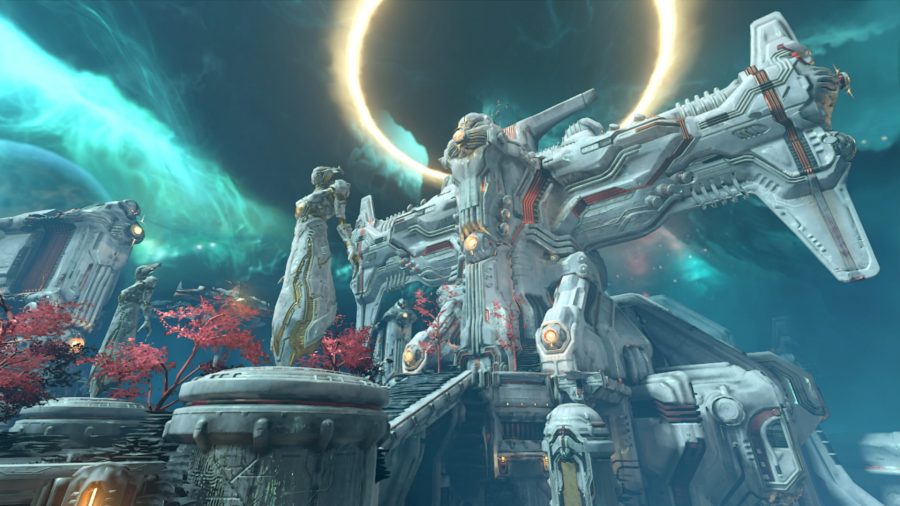 If you’re already a fan of Doom Eternal, and know what you’re getting yourself into, the Switch version is a damn fine way to replay it. It might not be the best way, as you do have to accept a noticeable drop in visual fidelity and a literal halving of the framerate, but you get the Switch’s portability as a trade-off. Just play with the Pro Controller and skip the cutscenes for the best experience.

The Switch port of Doom Eternal is as good as it possibly can be, with portability making up for a drop in visual fidelity and framerate