April 8, 2020 KillHouse Games has just confirmed that Door Kickers: Action Squad is finally available on Android, and that many of the bugs users over on iOS have been experiencing, including crashes, have been fixed.

April 3, 2020 Door Kickers: Action Squad isn’t available on Android in all regions yet, and we apologise for the confusion. KillHouse Games has confirmed that the release is still pending on Google’s side. We’ll update you all further when it’s actually available.

If you’ve ever wished that the real world resembled that found in ’80s police movies, Door Kickers: Action Squad is the game for you. It’s a pleasingly-retro side-scrolling shooter in which you direct a SWAT trooper on a murderous rampage across Nowhere City USA. Bullets will fly, heads will roll, and many doors will be kicked.

Like any self-respecting SWAT member, you’ll begin by selecting your gear. There’s a wide variety of weaponry and useful items, like health packs or refills, and each gun has its own unique set of recoil and reload speeds. Given that this is a sequel to the deeply-strategic Door Kickers, you can expect to develop some level of mastery over time.

Because while, on paper, it looks like a Contra-style shoot-’em-up, it’s actually an experience that requires a fair amount of thought. The action might fly in thick and fast, but those that go in prepared will have a much easier time. You can use cover to stay safe, utilise a variety of strategic abilities to turn the tide, and unleash your ultimate skill to clear out a room.

There are six different characters to select from too, which each have their own playstyle. You can level each of them up individually, with different improvements available per character.

In terms of gameplay, there’s a single-player campaign to beat that features a whopping 84 explorable levels, an endless tower mode, and a zombie invasion mode, which remixes the base campaign to include the shambling undead. 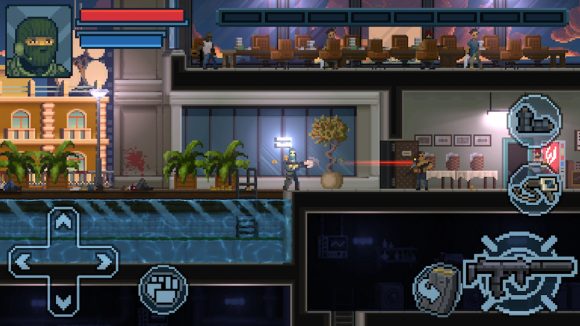 It’s an intriguing sequel in that it maintains much of what we loved about the original, the strategic play, while changing pretty much everything else. If you’d like to check it out for yourself, you can grab it right now on iOS via the App Store and Android via Google Play. It’s a premium app at $2.99 (£2.99).