Door Kickers: Action Squad is an ode to ’80s action movies. You play as one of six different SWAT troopers in the aptly-titled Nowhere City, USA, and have to work your way through a series of 2D levels punching, shooting, and blowing up a variety of bad guys. Just because you can.

As the title suggests, you’ll also kick an awful lot of doors down. This might sound silly and a bit cavalier, but remember that this is a spiritual sequel to the original Door Kickers, which was a deeply strategic top-down shooter. You also kicked a lot of doors down in that, like a real SWAT trooper.

While you could definitely describe the sequel as silly, it shares the strategic genetic code of its predecessor. Sure, it might look like a mindless 2D arcade shooter from the ’80s, but it plays like anything but. You’ll have to consider your options in each of the sandbox levels carefully; especially if you want to get a three star reward for each of them, which is no easy feat.

Here’s how the basic game works: you choose a SWAT trooper from one of six different options, with each of them having their own unique abilities and gear choices. There’s the rifle-wielding Assaulter, shield-toting Shield, and stealthy Recon, amongst others. You can equip each character with two pieces of gear, a primary weapon, and an ultimate ability. Some of this equipment can be shared between characters, while others is unique to a single one.

To unlock new equipment, you’ll need to earn stars. This is a currency that you earn based on your performance in each level, though it typically involves saving the highest number of hostages. Let just one die and you won’t get three stars. Gear isn’t particularly expensive though, and you can revisit earlier levels to try and get a higher number of stars once you have better equipment.

You’ll also earn experience each time you play a level; even if you fail. Experience is locked to a specific character, and allows you to level up each time you hit a certain threshold of XP. Leveling up provides you with skill points, which you spend on skills that can increase your accuracy, reduce the damage you take, and provide you with perks. 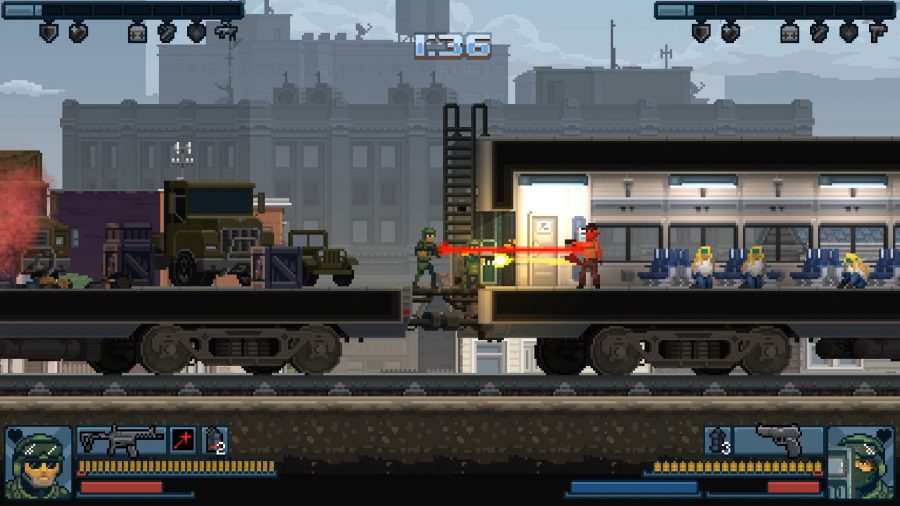 You’ll need all of the above as well, because Door Kickers: Action Squad is brutally hard. You’ll need to tackle each of the sandbox levels with a clear plan in mind, using everything at your disposal. There are usually several different entry points into each room, for example. Do you drop down from the ceiling and stun the enemy you land on, kick the door down to stun the dude behind it, or chuck in a flashbang and stun everyone. Either way, it typically consists of stunning and shooting bad guys.

Each of the different SWAT troopers plays very differently, which provides a ton of replayability.

Though planning is important, often you can’t even rely on that. While most of the rooms are visible on the 2D screen, you’ll occasionally encounter a room covered in darkness. That means you’ll have to go in completely blind, kicking the door down and firing immediately, or chucking in a flashbang. Your approach will vary depending on the character you use and how bold you’re feeling.

We don’t really have any issues with Door Kickers: Action Squad’s gameplay mechanics or loop. It’s difficult but never feels unfair, each enemy has its own attack pattern, and there are loads of different ways to solve each problem creatively. However, we do take issue with the game’s controls, which are imprecise and frustrating. Sure, it’s difficult to nail a game as complex as this on mobile, but we feel like more could have been done. 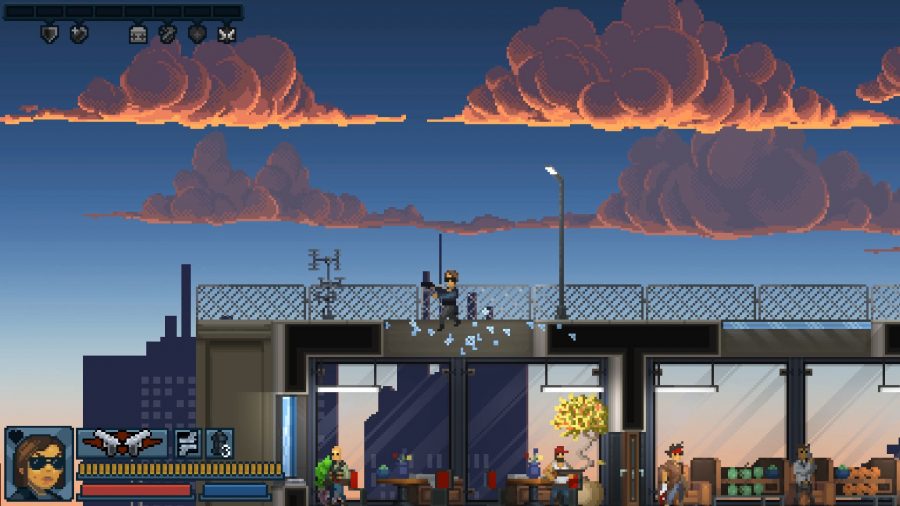 The issue mostly boils down to the d-pad, as every other action including shooting, reloading, and using equipment is tied to dedicated virtual buttons. Moving forward and backwards is fine, as the game locks the ability to jump and duck while moving. However, both of these actions are really frustrating when you need them, particularly as you so often find yourself in situations where you need fast reflexes.

We’ve found ourselves jumping into a room, only to find ourselves stuck on a piece of the environment, or unable to move entirely because the game hasn’t recognised the fact we’re pressing the move forward button. The same goes for the crouch button, which just doesn’t activate loads of the time for no apparent reason.

We just can’t escape the feeling that the game would function much better if it had dedicated jump and crouch buttons. Sure, that would flood an already very busy-looking screen with even more buttons, but you could map some controls to taps and flicks. We could flick up to jump or flick down to crouch, for example. Either would be much better than the imprecise controls we’re encountering right now. 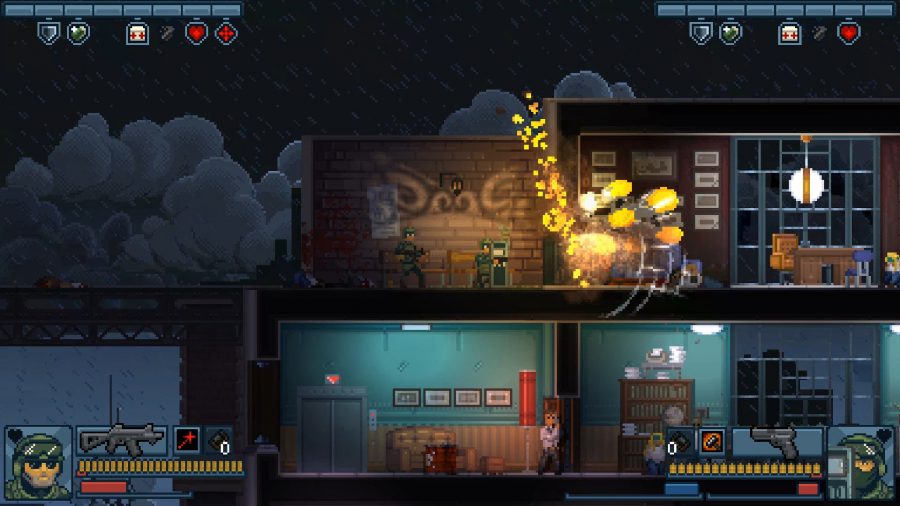 Also, there’s a disappointing lack of controller support, which could have mitigated these issues. We’re not being overdramatic when we say that the touch controls are off-putting to the point that we’re not particularly inclined to keep on playing despite how tightly put together the game is. It’s just too difficult to have to deal with imprecise controls.

We hope KillHouse Games manage to solve some of these issues, as the underlying game in Door Kickers: Action Squad is just so perfectly tuned and tightly put-together. We thoroughly enjoyed finding creative solutions to tackling each sandbox level and exploring the pros and cons of each different character. We just found our interest waning due to those poorly-implemented controls, and are wondering if mobile is the best platform for this as a result.