There’s two flavours of space fiction. One has the sweet taste of optimism and adventure. The other is bitter and sprinkled with a dash of existential fear. Many works dabble in a bit of both. Kyle Barrett’s End of the Universe most certainly doesn’t. His follow up to Immortal Rogue takes a spoonful of the gloom of last year’s vampire slasher, and simmers it down to concentrated grimdark. The game this spooky sauce covers is a curious, if not ultimately disappointing taste.

You wake up in the cockpit of a floating ship. You don’t know how you got there, but you know you need to go. Now. There’s a handful of options to choose from as far as where, but they all take you to a place where you will be shooting whatever is nearby. These options, one being following a blinking light, for example, promise a bit of a mystery. If you survive long enough down a path, you’ll eventually get another set of options, branching you down another path of a loosely knit story.

Each path doesn’t seem to have any obvious benefits over the other. In fact, the only real significant difference between them is that they seem to determine what sorts of enemies you’ll see the most during the next set of screens. If there are more consequential story elements deeper in space, then I just haven’t found them yet. Some choices seem pretty dramatic, but don’t lead to anything more than just shooting more people.

End of the Universe has shoot-em up in its haunted, black blood. From very early stages, enemies begin to crowd the limited space provided. They mostly either sit stationary and fire like a turret, or swarm you in a constant, relentless, dog fight. The amount of ships and bullets on screen can get downright oppressive at times, thanks to the very limited number of hit points you have to work with. The learning curve for how to identify the best ways to stick and move is steep, and will require many deaths before any feeling of confidence can be gained. 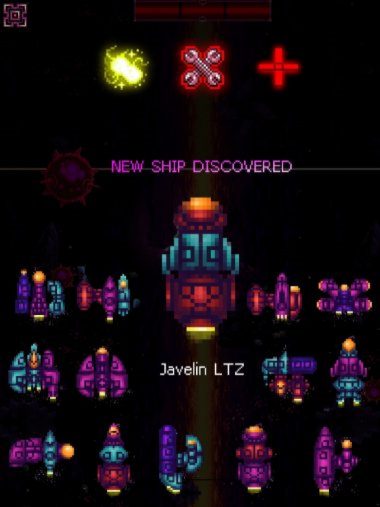 Some design choices seem inconsistent, though. Each arena is surrounded by a yellow box that acts like an electric fence to keep the action in. Well, your action at least. Enemies pass in and out of it at will, while you take damage when colliding into it. The size of this box grows and shrinks per stage, which in and of itself isn’t an issue. Combined with the debris that fills the field, however, and any given stage, can feel like an unfair death trap.

Procedural generation is a design concept that is supposed to algorithmically place objects and enemies in a way that still feels winnable by a player. Many maps in End of the Universe feel completely random. This is a problem because it can often create zones that feel boxed off and impossible to traverse safely. Maybe enemies are tucked behind two big chunks of ship debris, meaning you have to slither into a narrow space in order to destroy them, and move on to the next stage. Random encounters shouldn’t feel like Luke blowing up the Death Star. 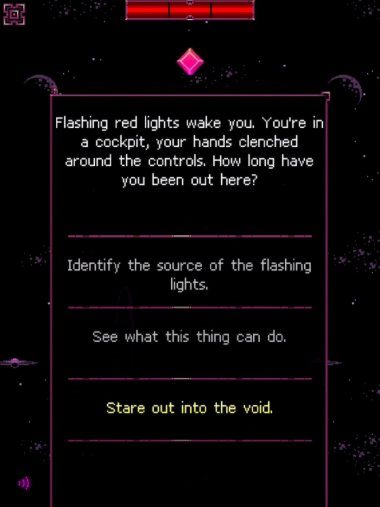 Sometimes enemies spawn under obstacles. Sometimes that seems deliberate. Big purple chomping aliens pop out from asteroids you’ve gotten too close to and take you by surprise. The overwhelming occasion features ships that would be moving around if they could clip through the walls that spawned on top of them, but instead just kind of spin aimlessly until you put them out of their misery. Some creatures will spawn, but linger just outside of the aforementioned yellow box, which means you have to make several fly-bys in hopes to hit them with some long range shots. These out of place enemies sometimes self-reset if you let them linger off screen for awhile. Count yourself lucky when they do.

The controls can be tough to navigate as well. With one touch, you can change directions, slow down, and dash forward. Time, and possible experimentation with the sensitivity controls, will be enough to make you at least a serviceable pilot. Even now, with hours under my belt, I clip debris and passing hostiles accidentally. It feels like slipping accidentally is just a part of playing any given round. 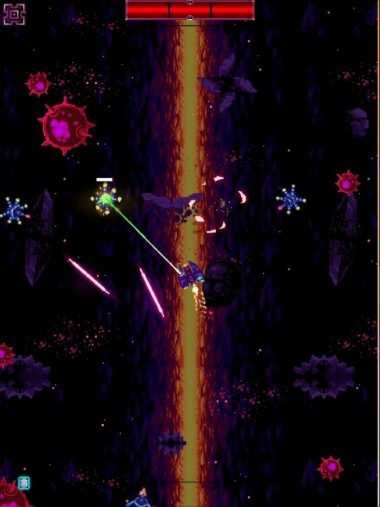 The stages seem well suited for dropping in and playing a small chunk quickly. Ironically, for a game that fills every available space with things that will kill you, moment-to-moment gameplay is pretty passive. This is because light weapons auto-fire, and heavy weapons take time to charge. You spend much of the game just watching your ship do things while you attempt to navigate it around obstacles. It’s an interesting undercutting of the Gradius-like button mash/hold designs that you see all over the genre already.

But it doesn’t always make for an interesting session. Once you start unlocking new ships and new potential weapons, the sort of combinations you can slap on your moving space turret really ties the whole thing together. It just requires real dedication to push through the initial hump to get to the gameplay loop you can really get behind.

Aesthetically, End of the Universe is also pretty inconsistent. On one hand, many of the enemy sprites are well designed and animated. Especially the bug/tentacle beast aliens and the metro cyber cops. Some of the other space enemies just look and feel generic. Even though two sets of enemies look remarkably different, they’re identities don’t hold up past ‘blue space guys’ and ‘orange space guys’ when next to the really inspired stuff. 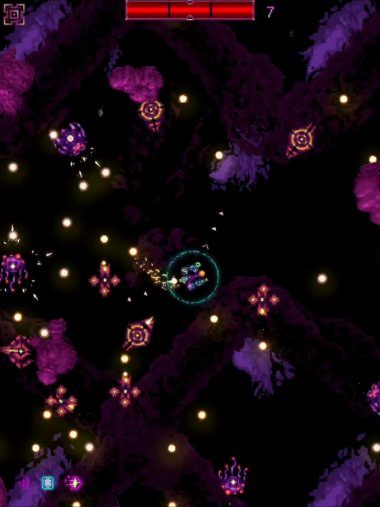 The backgrounds are often just washed out and hard to see with all the bigger obstacles on top. Some of this space junk is also pretty cool. The Broken World and Spaceway sections are particular standouts. The rest never really pop. The Hive Worlds are interesting the first time, but they don’t really stay with you.

Immortal Rogue fans will need to temper their expectations when approaching End of the Universe. They feature some similarities: roguelike nature (check out our list of the best mobile roguelikes if you fancy looking for a better alternative), some visual elements, and decision tree concepts, but these are wholly different games. Like Rogue, Universe is better than the sum of its parts, but this space adventure is far tougher to get into early on. Dedication may reveal a game you can sink your teeth into. You wouldn’t be faulted for finding the mostly passive feeling combat, mixed with the limited progression and unsatisfying narrative, to be too dark a frontier to travel.

End of the Universe review

End of the Universe tries to mash space shooting and roguelike randomness onto the small screen, with mixed results.