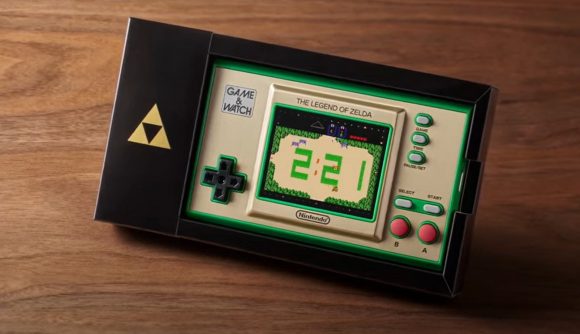 November 19, 2021: Our Game & Watch: Legend of Zelda Anniversary Edition giveaway is now over. Keep an eye on your inbox to see if you won

Along with the three titles mentioned above, the Game & Watch system also includes a digital clock and timer that you can interact with. Watch Link explore Hyrule and defeat villains when the clock is active, and see how many enemies you can defeat in Zelda II: The Adventure of Link while your timer is on the go.

For all those reasons and more, this week we’re very excited to give away a Game & Watch: Legend of Zelda Anniversary Edition to one lucky winner! So, if you want to return to Hyrule in a new and interesting way, make sure you enter our giveaway down below.

All you need to do to enter our giveaway is fill out the box below. If you do enter, please also check out our terms and conditions.

We’ll inform the lucky winner next Friday. For those of you who want to pick up the device before then, you can grab a Game & Watch: Legend of Zelda Anniversary Edition right now from the Nintendo website. Good luck!