In a world of Triple-A titles, live service games, and endless microtransactions, a good 2D platformer feels like a nice afternoon with your grandma. There’s a nostalgia there, and comfort too, but more than that, there’s the feeling that you can just have a good time, forget the world around you, and not feel any judgement. In that sense, Grapple Dog is a fantastic afternoon with your grandma, so much so that you might never leave.

Developed by Medallion Games, Grapple Dog is the first game from the new and exciting Super Rare Originals line. The premise is simple, you are Pablo the Grapple Dog, the world’s plucky saviour who has to face a legion of rebellious robots led by the head automaton, Nul. To do this, you use your fabled grapple hook to swing, pull, and leap around the game’s various levels. It’s the classic ‘save the world’ narrative minus the princess, but good use of humour and visual presentation goes a long way to separate this game from the litany of other 2D platformers available.

Before I even started playing, the score had me hooked. The cartoonish beats have a touch of the Wario 4’s about them, as does the pixelated colouring, but with a higher audio resolution that sounds like Pablo’s packing a hidden boombox full of foot-stomping jams for his journey. There’s enough consistency and variation to make the world feel alive throughout different levels and the hub-world. The tone is always in keeping with the vivid, but never garish, colours and character designs.

Both level and world design are finely crafted. Most levels feel the right length, and despite the fairly linear progression through each, I felt the incentive to check every corner of the screen for hidden entryways or places to attach my grapple. There’s a slight issue for those who aren’t interested in collecting the six gems scattered throughout each level, as you need a certain amount to unlock each world’s boss and continue to the next, but the variation between each makes replaying zones to perfection less tedious. 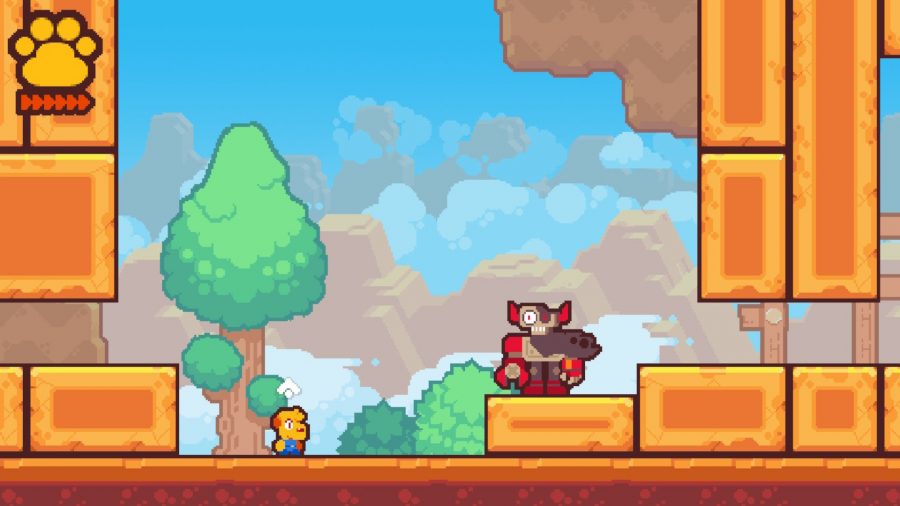 Momentum is a big deal in Grapple Dog. While movement is exhilarating for the most part, with Pablo moving like an unstoppable force through level after level, there are some trickier moments. On occasion, I found myself bouncing back and forth trying to land a hit on a robot minion, each time jumping just over the enemy, which is frustrating. Fortunately, these moments are counter-balanced by the sleek use of the grapple, and in certain levels, you feel more like Spider-Man than Grapple Dog as you launch your way through the 2D worlds.

You feel more like Spider-Man than Grapple Dog as you launch your way through the 2D worlds.

It’s worth saying that just because the audio and visual aspects are so warm and welcoming, it doesn’t mean the gameplay is a walk in the park. Grapple Dog finds the right time to do its best Celeste impression and challenges you often when you least expect it. The feeling of pulling off a particularly tricky platforming section, a lot of which have no platforms at all and see Pablo hurtling from grapple to grapple, is gratifying, especially when placed just before the end of a level. 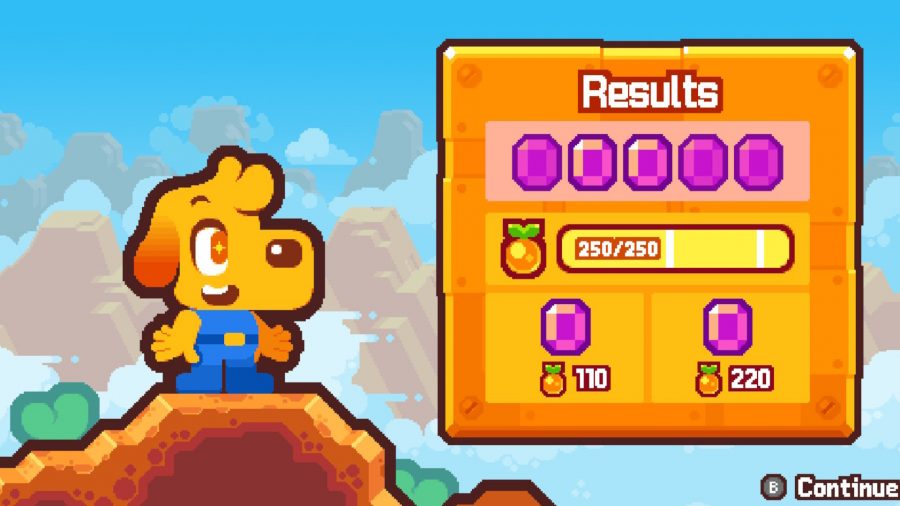 All in all, Grapple Dog is a lot of fun. It toes the fine line of not overwhelming players with innovations and changes to the much-loved platforming formula, while still offering enough to discern itself from the crowded genre. The single most impressive thing about this game, though, is the cohesion. The music, visuals, gameplay, humour, and Pablo the grappling dog himself, all come together to form a charming package that is hard to resist, and harder even still to put down.

With a vibrant soundtrack, vivid visuals, and an eye for a punchline, Grapple Dog is a good time in a neat package. There are a couple of issues with movement, and progression can feel forced in places, but overall I’m hooked on the first game from Super Rare Originals and Medallion Games.