Haven is an RPG and visual novel hybrid with a surprisingly realistic love story for a game set in the far reaches of space. The plot focuses on lovers Yu and Kay, who take off on a cosy spaceship, aptly called ‘Nest’, in order to escape a matchmaker dead set on keeping them apart.

The game begins a few months after the pair land on a pastel-coloured planet named ‘Source’. When the Nest is damaged due to an earthquake, you’re quickly required to glide around islands to collect resources, pacify beasts covered in some mysterious rust, and craft goods to help you survive.

Haven originally released on PC and other consoles last year, so I knew a little bit about the title before diving into the Switch version. However, its gameplay doesn’t quite work in the way you might expect, with some elements being more fun than anticipated, while other aspects quickly grow tedious.

You largely traverse Source by zooming around in hover boots at breakneck speeds. This sounds fun, but after numerous tutorials and a few sassy quips from the characters concerning my great ineptitude, I realised I wasn’t getting the hang of it. 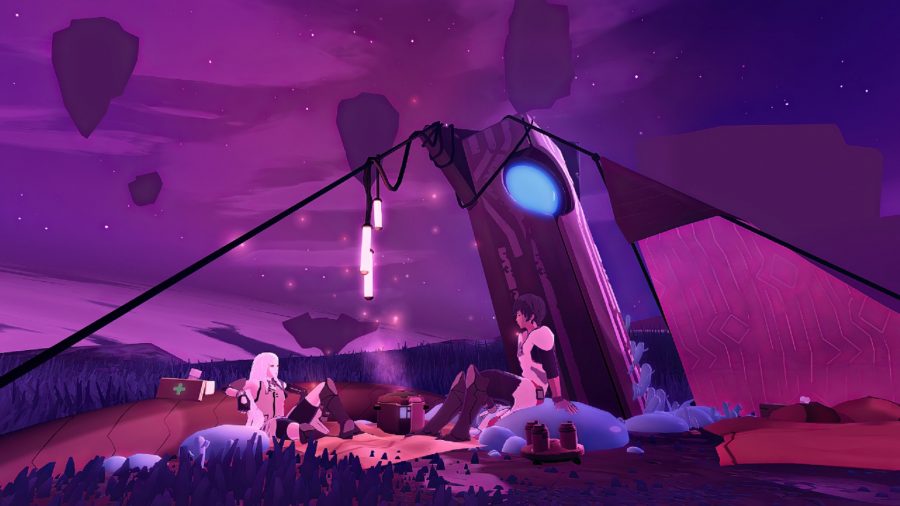 There are two speeds in Haven: incredibly fast gliding or excruciatingly slow walking, meaning it’s often a hassle when you want to run – but can’t – after accidentally speeding past something you need to pick up. I will give Haven credit where it’s due, however, there is a drifting mechanic to make things a bit easier, and while it comes in helpful at times, movement is still too tricky to master, even once you’re in the late game.

A huge part of Haven involves hovering about and clearing up strange patches of rust. This becomes a pretty monotonous task, as you fly around like a baby bird pushed out of its nest too soon. Although the process is slow, the music that accompanies this arduous task is relaxing, and Source has a gorgeous landscape that’s nice to look at once the rust has cleared.

The cleanup process is occasionally broken up by simple combat encounters that see you knocking out some very cute, rust-covered beasts in order to remove the aggravating substance. Early on, I made friends with a lizard covered in mushrooms. The precious creature followed me back home and I was able to scratch his belly whenever I wanted to. This simple addition greatly improves the gameplay experience. 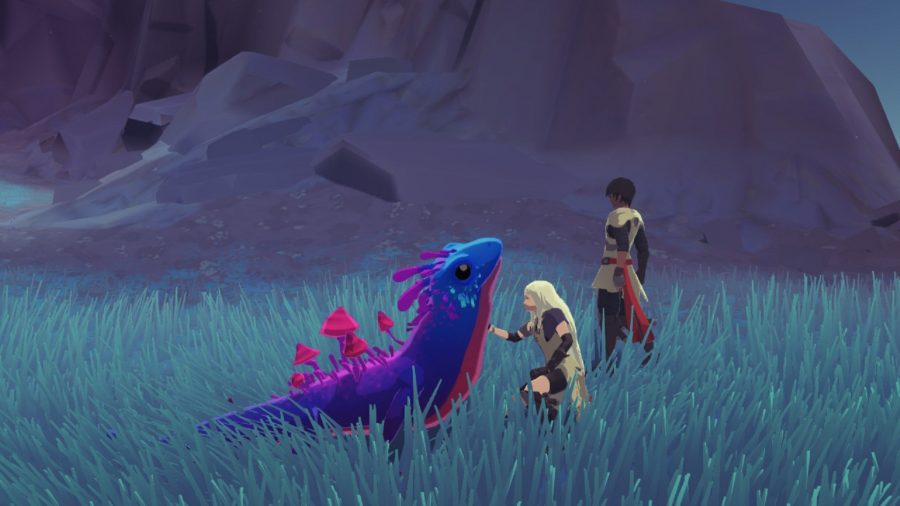 Where Haven excels is in its storytelling. Yu and Kay are treated like a real adult couple who joke around in a natural way, get into arguments, and even have some surprisingly ‘adult’ moments. I grew to love my return visits to the Nest after a hard day of rust-clearing to see what sort of back and forth the characters would have that evening.

Each night I would cook Yu and Kay some dinner to hear them talk about the local fruit and vegetables, check on my mini garden that took forever to grow, and craft some goods for the next day. When you eat food and pacify animals, you eventually get the chance to celebrate. Celebrations involve drinking too much and viewing special scenes that delve deep into the characters’ psyche and provide some handy stat boosts for your adventure. 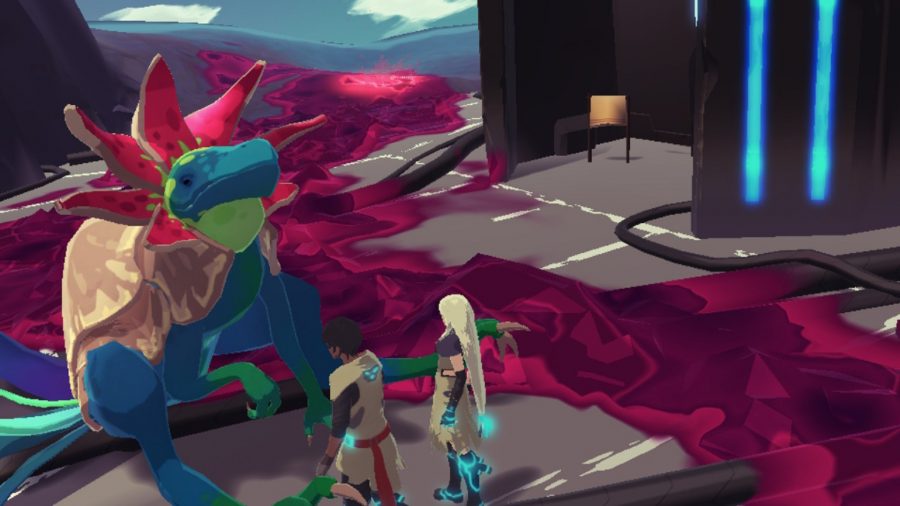 Unfortunately, while playing through the game, it completely crashed four or five times and took me back to the Switch home screen. Haven’s autosave feature means that you’ll rarely lose much progress, but the slow load times make it feel like a chore to get back into the adventure. However, this issue may be fixed with an upcoming patch and certainly doesn’t impact the gameplay too greatly.

I’m well aware that visual novels aren’t for everyone, as even I find scrolling through blocks of text tedious when the story doesn’t hold up. However, Haven’s heartwarming romance between Yu and Kay, the island traversal, and light-hearted combat come together extremely well to create a game that should delight a wide audience.

A heartwarming story of love against all odds. Traversal can be tedious, but Haven makes up for it with some charming characters and an adorable lizard companion.