The Gods have fallen, Olympos is barren. In the world of mortals, all humans have been turned to stone – except for one. Our protagonist, Fenyx, emerges from the ocean, shipwrecked on The Golden Isles, only to find that their shipmates, all warriors great, are nothing more than cold, lifeless statues.

Ubisoft’s latest RPG launches on the Ubisoft store later this week, and brings a new flavour to Greek mythology as you embark on a quest to save the world from the thralls of the devastating Titan Typhon – and most importantly, restore your disparaging crewmates, heroic brother, and all other humans from their stony curse. While it retreads myths and legends that are well-worn by now, from Disney’s 90s animated musical Hercules, to the gaming sphere with Assassin’s Creed Odyssey and Hades, Fenyx Rising brings its own particular spin to classic mythology.

This spin is evident from the very beginning: Zeus makes his way to see Prometheus, who he chained to a mountain and cursed to have his liver eaten by eagles for eternity. But instead of being all doom and gloom, Zeus  and liver-less giant crack a few jokes together. It’s an intro that helps to establish Fenyx Rising’s jovial take on mythology.

The mismatched pair act as the narrators of Fenyx’ legend, and while I wasn’t sure about their in-jokes and self-referential humour to start with, their commentary grew on me, especially once you’re out of the tutorial and their entrances become less frequent. They could definitely do with laying off a few of the jokes where the punchline is simply Zeus’ inferred alcoholism, for instance, but there are some nice references for those with a knowledge of the subject matter.

You begin in a small corner of the map named the Clashing Rocks, where your goal of saving a stranger – who seems to be the only other human left alive – teaches you the ropes of fighting, climbing, and flying. As well as some light puzzle-solving, you’ll find a lot of lore dumped onto you by messrs Zeus and Prometheus as you hunt for your weapons – each of which belonged to a hero of legend.

But it’s when you finally unfurl your wings properly that the rest of the Golden Isles opens up to you, and the game really comes into its own. You’re free to explore wherever you see fit – the only barrier being the powerful enemies you find the further you adventure. I still remember getting thoroughly walloped by my first Cyclops as I was desperately trying to reach the chest it guarded, whereas now I can take them down with relative ease. 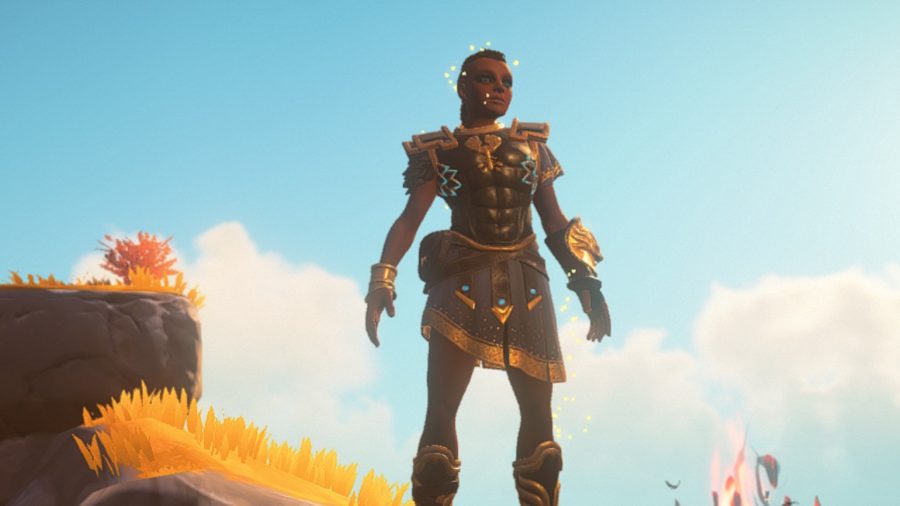 The sense of accomplishment isn’t limited to defeating enemies, though. The flying mechanics allow you to climb huge statues honouring the Gods – at the top of which you can ‘synchronise’ with your landscape to uncloud that area of the map – and just yeet yourself off the edge, relying on Daidalos’ wings to carry you in whatever direction you please. Just don’t mention what happened to Icarus, okay?

It’s not just flying that’s fun, either, as you can also call upon your trusty steed to take you by hoof across the isles. Holding X will make it magically appear beneath you, and there’s no need for any explanation other than magic god horse.

However, as good as it feels to take down a Cyclops with ease, the roleplaying mechanics are fairly basic. You collect different currencies by solving puzzles or killing enemy creatures, each of which can be used to upgrade a different skill or statistic. For instance, Zeus’ Lightning can be used to upgrade your stamina, whereas Ambrosia is used to upgrade your health. As you’ll be finding currencies pretty evenly on your journey, you won’t have to make many decisions over what to invest in. Yes, you’ll need to choose what skills to unlock first, but there’s no need to specialise as you’ll quickly be able to unlock everything. 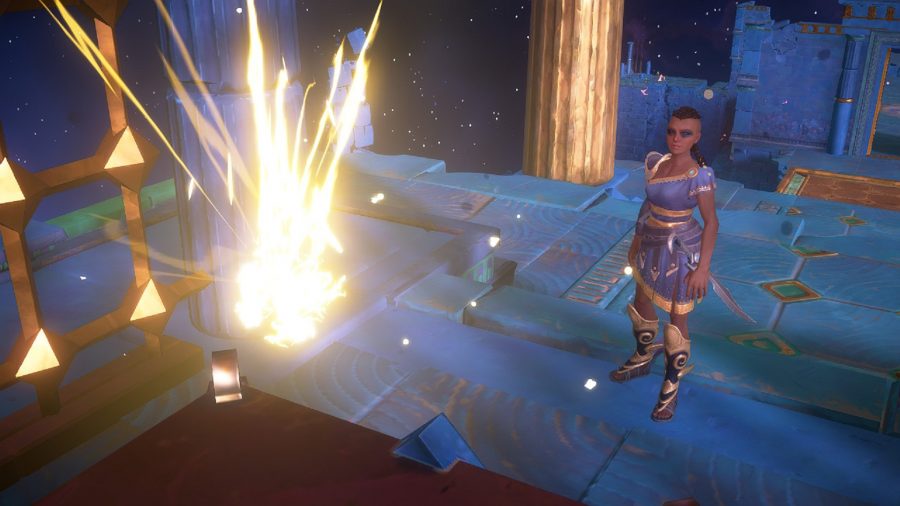 You can get pretty powerful pretty quick by just playing through the story missions. However, there’s plenty of fun to be had exploring side quests and the many puzzles  littering the landscape. These are a fun aside, but most are brutally simple. Whether it’s placing pieces in the right order to make a picture or carrying a cabbage to a plinth, the minimal effort doesn’t seem worth the rewards that you’re showered.

The puzzles do break up the fetch-quests and assassinations of the main story missions, though, and it’s those very God-sent quests that eventually offer the most impressive puzzles and platforming in the game – especially when it’s time to face a mythical boss. There are small dungeons – entrances to Tartaros – located all across the map, but they pale in comparison to the vaults dedicated to Athena, Ares, Aphrodite, and Hephaistos. The most interesting puzzles are also clearly saved for these special moments, to make them mechanically interesting as well as visually impressive. It just would have been nice to sprinkle a little of that magic across the overworld, too. 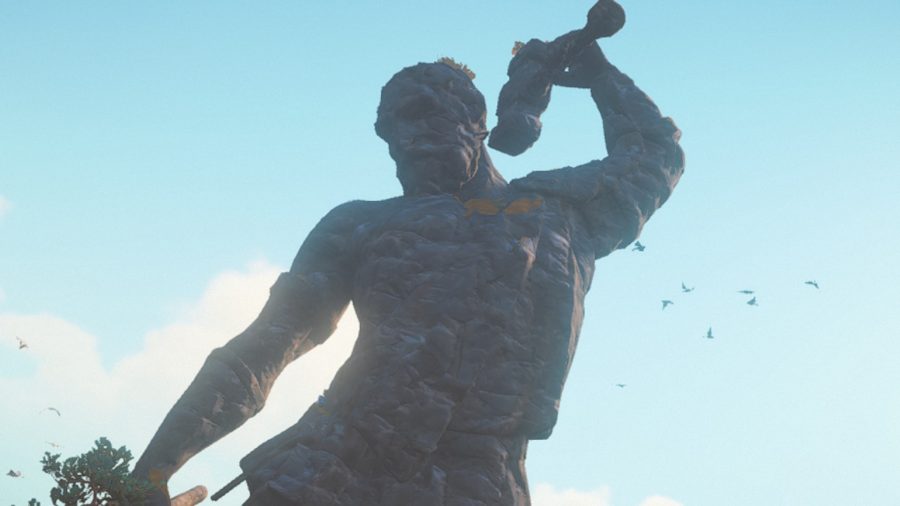 Another bugbear I also had was the menus – you use your joystick to control a cursor, rather than scrolling through lists, which will undoubtedly infuriate players across all consoles upon the game’s release. Considering how much time you spend deliberating over upgrades and choosing weapons, a more intuitive menu system for console players is a must.

Though I would be lax not to mention the amount of accessibility options available to players: colour blind options, subtitles, menu narration, and fully customisable controller remapping mean that players who need a variety of accessibility aids can embark on their journey like anyone else.

Enjoyed this? You’ll love our list of the best Switch RPGs

Difficulty settings can also be changed at any time, and precisely tuned so that you can tailor your experience to your skill level. For example, you can make combat easier and puzzles harder if you’re finding one more challenging than the other. 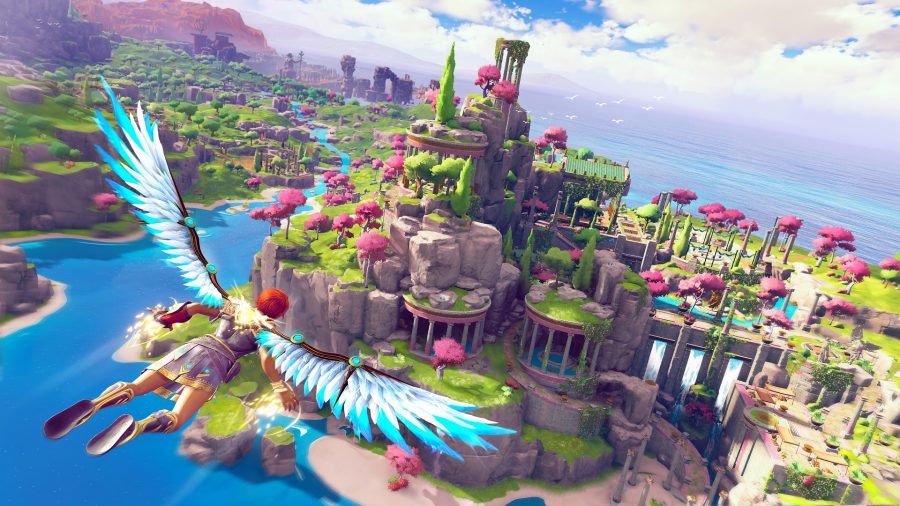 Over the coming days you’re going to see a lot of comparisons to Breath of the Wild, and those comparisons aren’t without merit. The similarities stem from movement and traversal to combat and powers, but Fenyx Rising never feels like it’s copying anything else. It offers a unique take on the RPG genre, with enough style and humour to set it apart from any other take on Greek mythology. It’s a game that doesn’t take itself too seriously, and you probably shouldn’t either.

Embrace the game for what it is – a fun retelling of classic mythology. I know I’ll be exploring further, taking on new foes, and cracking more puzzles even after finishing the game. I’ll also be the first in line when the Myths of the Eastern Realm DLC releases, journeying with a new character to a world inspired by Chinese mythology – a road much less well-trodden by western games.

Immortals Fenyx Rising offers a world that you can’t help but explore, with some truly impressive dungeon design. The game’s only let down is its simple puzzles and painful menu navigation.