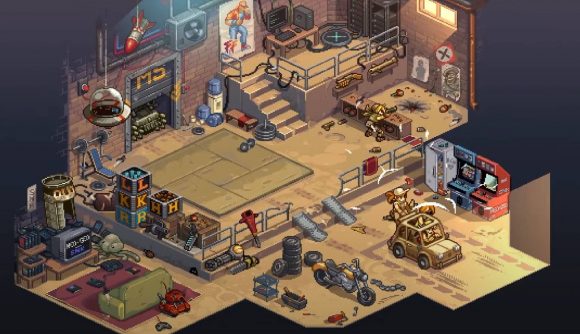 In today’s Indie World Showcase several new and exciting titles were shown, with many of them announced to be released later today. Some highly anticipated games finally got release dates confirmed for Nintendo Switch, including much-requested ports of Loop Hero, Metal Slug Tactics, and Tetris Effect Connected.

A few expected games got updated release dates, with Chucklefish’s Eastward confirmed to be arriving on September 16th this year, as a timed exclusive console release for Nintendo Switch. Metal Slug Tactics was also confirmed for Switch, with a 2022 release window. One surprise announcement was a new puzzle game from Yacht Club Games and developers Vine, with Shovel Knight Pocket Dungeon arriving on Switch this winter.

Many of the titles revealed also got extended trailers. Watch the latest trailer for Bomb Rush Cyberpunk, the Jet Set Radio spiritual successor coming next year.

Put your mark on a sprawling metropolis as you paint, do tricks, and dance to new music from Hideki Naganuma when Bomb Rush Cyberfunk by @ReptileGames grinds onto #NintendoSwitch in 2022! #IndieWorld pic.twitter.com/DW0CTuEdrj

Unravel puzzles and help quirky characters with your camera when the hand-drawn adventure game TOEM by @SWMGames comes to #NintendoSwitch this fall! #IndieWorld pic.twitter.com/PEdCQqoqCr

Loop Hero from Devolver Digital was finally confirmed for Switch after months of requests, landing later this year.

Fight back the Lich and wield an expanding deck of mystical cards to build your own world to traverse through when Loop Hero from @_FQteam and @devolverdigital comes to #NintendoSwitch this holiday! #IndieWorld pic.twitter.com/el4X4x1wbx

Axiom Verge 2, the long-awaited sequel to the cult classic Metroidvania, Axiom Verge, was not only shown but will be dropping later today. From solo developer Thomas Happ, watch the latest trailer to see why Metroid fans should pick up this impressive pixelated adventure whilst waiting for Dread.

The long-awaited Axiom Verge 2 is available now on #NintendoSwitch!

Empowered by the same microscopic machines that are gradually consuming her humanity, Indra must navigate a dangerous world that blurs the virtual and the real. #IndieWorld

Metal Slug Tactics, the tactical spin on a 2D classic will come to Switch in 2022.

It’s time for a new kind of mission!

Enjoy a brand-new tactical RPG based in the Metal Slug universe when Metal Slug Tactics from @LeikirStudio and @Dotemu comes to #NintendoSwitch in 2022! #IndieWorld pic.twitter.com/lORTIC179q

And after years of requests, Tetris Effect Connected will bring psychedelic puzzle fun to Nintendo Switch on October 8. Notably the same day as both Metroid Dread, and the Nintendo Switch OLED Model. This will certainly be a visual feast on that incredible new screen.

Experience Tetris like you’ve never seen, heard, or felt before in the innovative Tetris Effect: Connected by @enhance_exp. Play solo and take on your friends in online or local multiplayer! Coming to #NintendoSwitch on Oct. 8! #IndieWorld pic.twitter.com/MaaUQZ7w3Y

There was plenty more announced today, so you can catch up on everything we missed here by watching the entire Indie World Showcase stream here.