I didn’t know that I needed chibi Donald Duck this much. He’s objectively the best thing about Kingdom Hearts: Melody of Memory and he only ever appears in the loading screens. That isn’t to say the rest of the game is bad, it’s really not, but a lot of the enjoyment that I think people will get from this rhythm game spin-off is down to how much they care about Kingdom Hearts, and more specifically the music.

You see, much like Theatrhythm Final Fantasy and the sadly never localised Theatrhythm Dragon Quest on the 3DS, Kingdom Hearts: Melody of Memory is a rhythm game where you must press buttons in time with the music as you explore an abridged version of every single Kingdom Hearts game. Yes, even the endless number of side games.

Fans will want to know if this is essential to play, whether there is any new lore. The good news is that Melody of Memory does have something for you. I’m no expert on Kingdom Hearts (then again, who is) but it seems relevant. It’s just that you have to slog your way through recaps of the previous games, tapping buttons to the beat of instrumental versions of Disney tunes (well, mostly anyway) and the rest of the original music throughout the series.

I might be a bit of an outlier here, but I didn’t find the majority of the music in Kingdom Hearts all that memorable. There are exceptions, of course, but they’re usually the original songs with lyrics or those that are distinctly Disney. I can see why Theatrhythm games of the past celebrate the series they’re based on, Final Fantasy and Dragon Quest have memorable music. I personally don’t have the same attachment to the majority of Kingdom Hearts’ musical efforts, but if you really love the music, Melody of Memory does it justice. 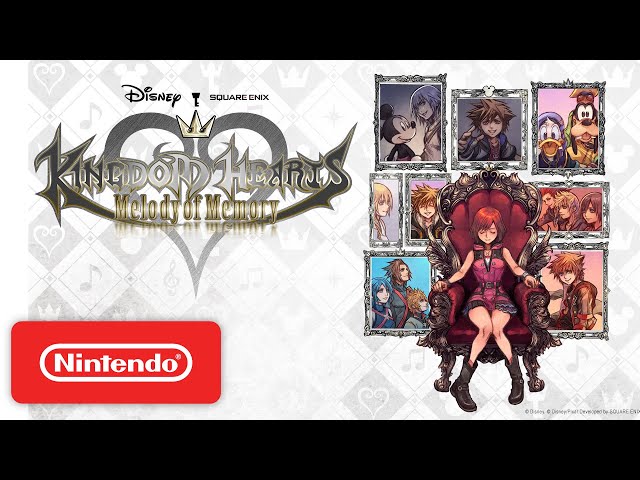 Unlike the Theatrhythm games, Melody of Memory uses a style that’s closer to the real games. Sora, Donald, Goofy, and any other characters you unlock during your time with the game run ever forwards on an obstacle course littered with Heartless appearing from out of nowhere. The only clues that this ever was linked to Theatrhythm are the chibi characters in the loading screens and the control prompts themselves. What’s here looks inviting, but I do miss the constant presence of the charming chibi Theatrhythm style characters. At least we have those loading screens, eh?

The big issue with field battles is that there are so many of them, around 80% of the levels are field battles, that I find myself getting bored of the gameplay style

Memory of Melody has three difficulty settings for every song, each one appropriately balanced for beginners, the moderately competent, and expert button tappers. Like most rhythm games, you’re tasked with pressing or holding buttons at the precise moment the prompt meets a certain point of the screen.

Melody of Memory splits into three level types. Field battles are the most common you’ll find and they’re fine, just fine. They work largely the same as the Theatrhythm games did, just with a slightly different perspective, distinctive backgrounds, unique enemies, and very occasionally a guest character that joins the team. They look nice, but my big issue with field battles is that there are so many of them that I find myself getting bored of the gameplay style. They are challenging, sure, but each one feels similar to the last.

Where things differ slightly from the Theatrhythm games is that there’s no touch screen. Instead, there’s a new command that has your lead character fly through musical notes, and this works well as a replacement. That said, I did personally find it tricky to execute the prompts for whenever I had to attack a Heartless in the air, and this is usually my downfall for any perfect attempts. 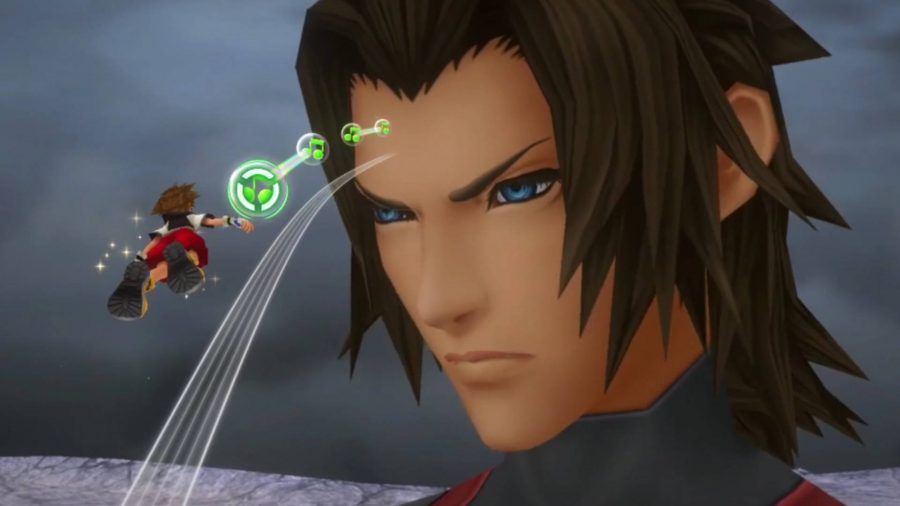 Boss battles are largely the same as the field battle stages, though instead of timing your button presses when enemies come close, you’ll be hitting buttons as they pass over a line as Sora and friends fight a boss in the background. Occasionally the prompts have a purple aura. These require you to push every button in the sequence to avoid taking damage from the boss’s ultimate attack, which does provide some tension.

It’s hard to know exactly who Kingdom Hearts: Melody of Memory is for

Finally there are the Memory Dive stages, usually reserved for unlockables but take over as the most dominant stage type when you reach the Kingdom Hearts III section. Here is where the bulk of the songs are, as your team flies through FMVs with button prompts not too dissimilar to the boss battles. They’re for the most part enjoyable stages that do change things up a little bit. My only complaint is that Let It Go is the only Disney song with vocals that made it into the World Tour mode. This was especially upsetting to learn after hearing an instrumental version of Randy Newman’s iconic song You’ve Got A Friend In Me from Toy Story.

Thankfully there are more vocal tracks in the unlockable stages, played via the Track Selection mode. Most are unlocked by completing tasks in each of the worlds, but some require the fusion of materials via the item menu in the World Tour. It’s nowhere near as complicated as it sounds, but you may find that you have to replay songs to get enough resources. 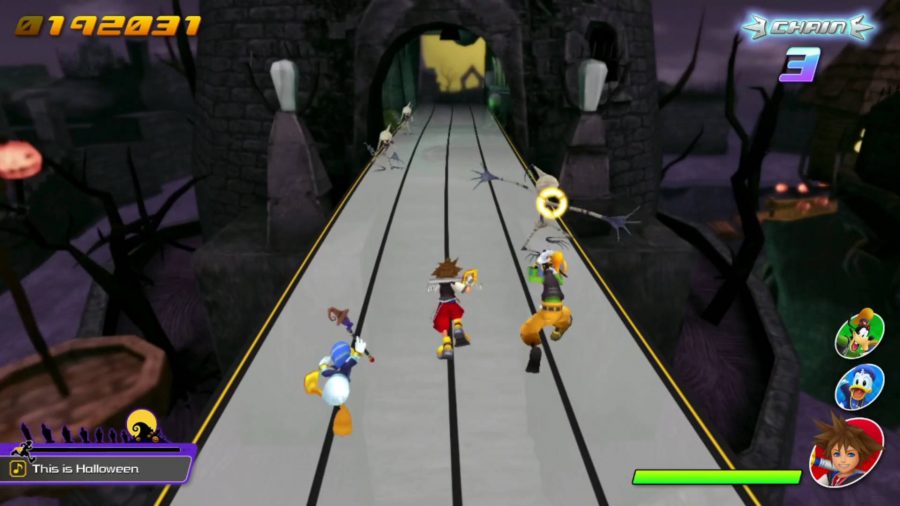 There’s also a couple of multiplayer modes as well. The versus mode adds a bar that, when filled, allows players to inflict negative effects to make the stage they’re playing slightly harder. It is somewhat fun and you can play it online or against the AI, but versus mode is a bit of a throwaway mode compared to the World Tour. There’s also a co-op mode where you can play field battle stages with one friend, but this is given even less priority than the versus mode, and it’s not all that complex as you only control one character on-screen rather than three.

It’s hard to know exactly who Kingdom Hearts: Melody of Memory is for. I suppose it’s for the Kingdom Hearts super-fans, who have likely picked it up already. But for everyone else, it’s quite an exclusionary game by design. Despite being the cliff-notes for the entire series so far, Melody of Memory is a half-decent rhythm game that’s bogged down by repetitive stage design.

A love letter to the music of Kingdom Hearts and a fab way to summarise the story, but it can get rather repetitive at times.