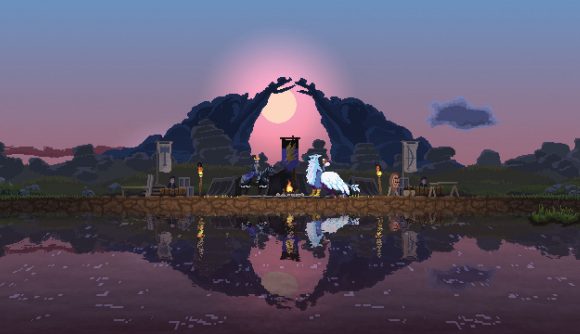 April 28, 2020 Kingdom Two Crowns is out right now on iOS, and we’ve updated this article with new information to reflect that.

The wait is over, folks. Kingdom Two Crowns is out right now on iOS, and is rolling out on Android over the course of the day. For those not in the know, it’s the sequel to Kingdom: New Lands and it expands on the original in a variety of different ways, introducing a story campaign, cooperative multiplayer, and a brand new feudal Japan setting.

If you haven’t experienced this series before, you play as a monarch who lands on the shores of a new kingdom and has to make it habitable. You begin by recruiting the locals (you literally just toss coins at them) to build, guard, hunt, and do whatever other menial task need performing. You start with literally nothing but will eventually have your very own castle, which is fully-functioning.

Your overarching goal is to fix a ship that will allow you to travel to the next island, at which point the experience starts all over again; albeit more challenging this time. But where does the challenge come from? Well, each night a variety of monstrous creatures attack your kingdom, and you have to make sure it’s well-defended. It’s a bit like a survival simulator in that sense.

Managing your budget is no small feat either. You start the game with a few coins, which you’ll quickly spend to pay the locals to build you stuff. Each time you recruit a local, build or upgrade something, or order a crafted item, you’ll spend cash. To replenish it, you need to hire hunters, invest in travelling merchants, or explore the nearby area for treasure. That is its own reward though, as the game is visually stunning in a retro kind of way.

The sequel expands on all of this by introducing a new story campaign, which challenges you to build a kingdom that stands the test of time and perhaps finishes off the monsters that plague it for good. There’s also a new cooperative mode that you can play in split screen (we’d recommend a tablet for that) or online. 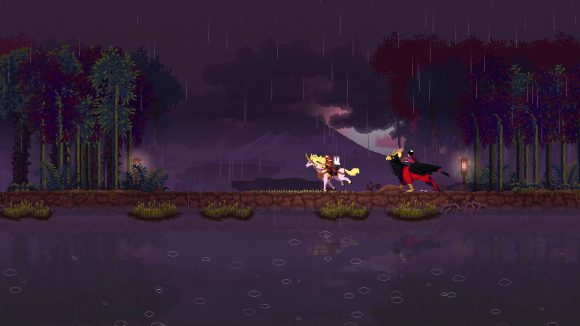 There’s also a brand new setting: feudal Japan. It pretty much plays the same, but the visuals have seen a huge overhaul, with trees making way for bamboo and your buildings and characters taking on a Japanese flavour. Apparently this isn’t the only new setting we’ll get either, as Raw Fury has revealed that more are coming in future updates.

The first of these arrives today, too, in the form of Dead Lands. This expansion is a crossover with Metroidvania Bloodstained: Ritual of the Night, featuring your favourite characters, which you can swap between on-the-fly, and a bunch of new mounts, which have all-new abilities. You can learn more about this expansion by reading our news article, which we’ve linked to beneath this post.

If you’re interested, you can grab Kingdom Two Crowns right now on iOS via the App Store, or keep an eye out on Google Play for when it launches in your territory. You might want to hit the pre-register button to receive a notification.