I had to stop playing Loop Hero to write this review, annoyingly. And all I can think about is playing more Loop Hero as soon as I finish work. Folks, I am hooked. Honestly, this game should come with a health warning, because my mind has been occupied by little else since I started playing.

For newcomers, Loop Hero is from the minds of developer Four Quarters and is another feather in the cap of incredible indie publisher Devolver. It’s sort of a reverse tower defence game, presented in a gorgeous pixelated art style inspired by gothic horror, you play as a mighty hero trying to figure out what’s happened to them in a dark and brutal world.

You walk around a randomly generated path, on a daily cycle, and attack enemies automatically, but with each successful kill, you can be awarded either equipment or cards. All of these variables can have huge effects on the battlefield, and this is where the strategy comes in, and this is where things get very addictive…

Your path on each loop starts out barren, nothing but plain roads with a few paltry enemies littered around for you to mow down. But quickly you’ll earn cards, such as rocks and meadow, or the cemetery and the grove. You can place some tiles on the path, to change both the enemies you encounter when you pass through them, and also the resource you pick up when you do. For example, the grove gives you wood when you pass through it, but also spawns an enemy called the Ratwolf every two days. 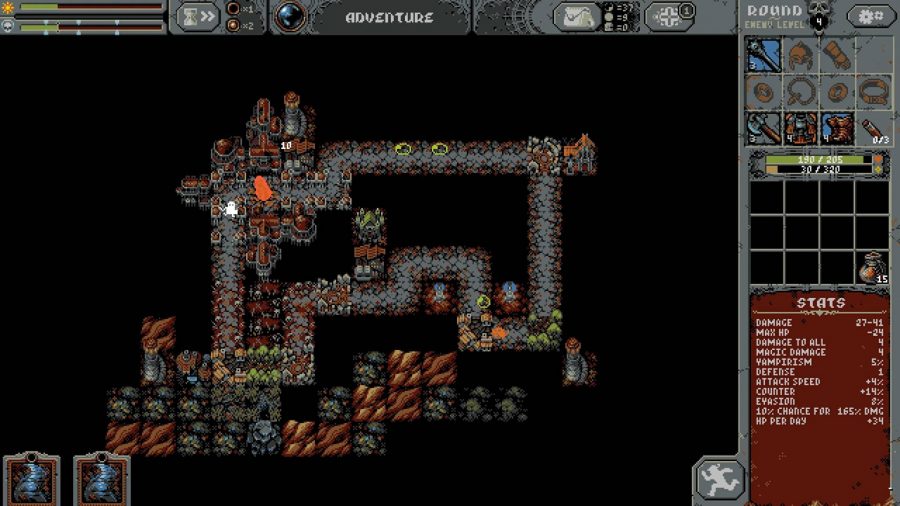 Other cards like the aforementioned rocks and meadow are passive. Each meadow tile laid on the map heals the hero for 2hp at the start of a day, while every rock tile on the map heals 1hp, and another 1hp for every adjacent rock, encouraging you to build your own mountain range on the side of the map. Essentially, there’s a huge amount of micro-changes you can implement simply by properly arranging the tiles on the map, and they can also affect each other in very interesting ways. Now, all this is before we even get to the real depth of the game.

As well as map cards, you also pick up equipment as you travel around the map. Not just determining hp, attack, or defence, other elements like vampirism (gaining hp from attacking enemies), critical chance, and critical damage, all quickly have a strong effect on your playthrough. Even though you aren’t actually attacking enemies yourself, I found it immensely satisfying to figure out the best loadout for my hero at any given moment, and the constant drop of cards and equipment keep you busy enough anyway. 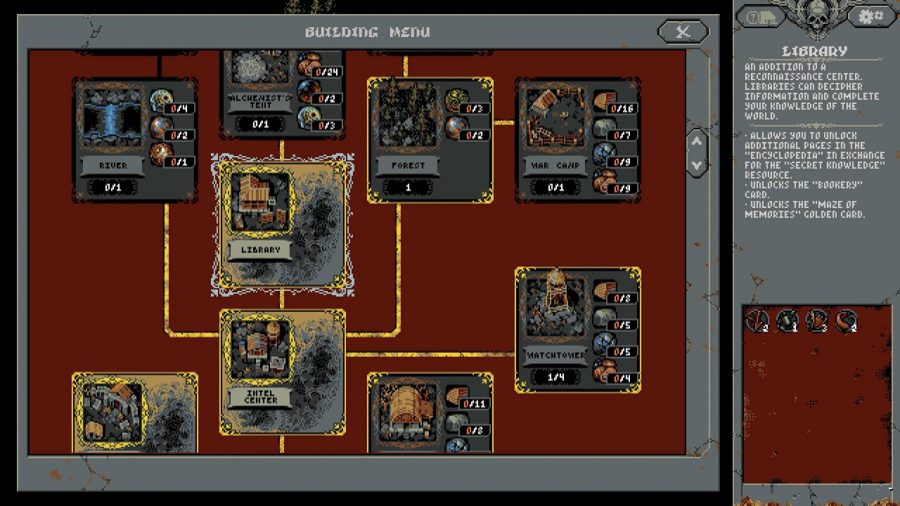 You might ask what actually is the point of all this? Which is fair, and luckily there’s plenty beyond the normal gameplay loop. Your path starts with a campfire, and with every successful loop back round to this campfire you have the option to head back to the village with all of your collected resources. If you choose to head back elsewhere, you only take home 60%. If you die anywhere on the map, you only take home 30%. You can amass a huge amount of different resources, and it is genuinely gutting to get caught out by a particularly strong enemy and be left with next to nothing.

I became really fond of the Rogue as they can double wield weapons and you unlock all your equipment back at the campfire, instead of slowly over each loop. I changed the settings so the game didn’t stop after every battle, and simply suited my little hero up at the camp and let him have a bash at the entire next loop. Then, as soon as I unlocked the Gymnasium and special traits, the game felt even more satisfying to play through. I will say though, that after the initial few hours, this process becomes fairly gruelling. 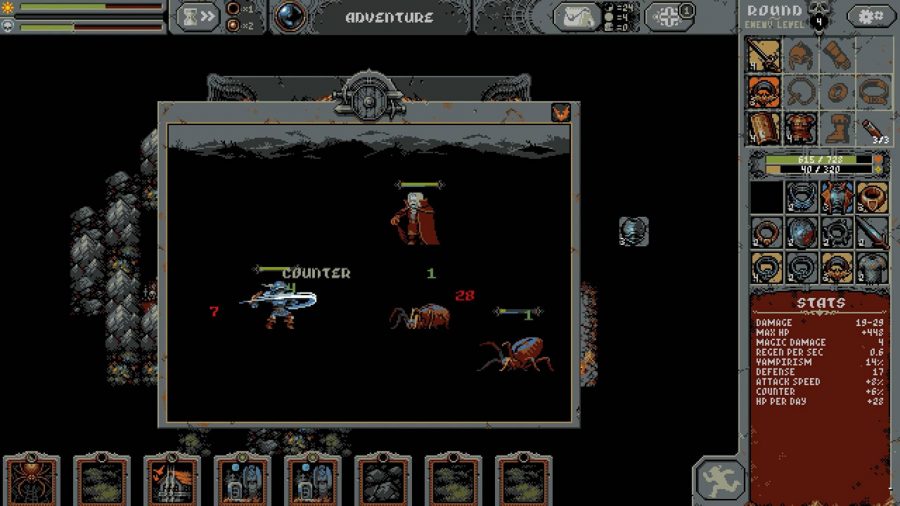 The buildings you unlock later start to need ludicrous amounts of resources, and you’re not guaranteed to encounter them on any loop. Although I was completely enamoured by the gameplay, I did find myself occasionally coming back from a very successful run and finding I actually had very little to show for it.

I never fell out of love with the gameplay though. The complexity on offer here is astounding, I enjoyed taking a moment every few seconds to look at my map and try to work as strategically as I could. Crafting the perfect corner of the map where several tiles are affected by one smartly placed tile like a beacon (increases movement speed) feels incredible, and when you pull exactly the right cards to pull it off, it’s thrilling.

Now, you can even choose the cards in your deck, and the abilities you can unlock over time, meaning you have a certain sense of agency over the style of the loop you can manifest. There’s always random elements, but understanding the resources you’re trying to amass and the playstyle you prefer helps a lot, and the game allows for that sort of minuscule management that feels so good to control.

Loop Hero does exactly what it sets out to do, and the gameplay is one big repeated loop. I enjoyed myself because I like the gameplay, but even I was very happy to increase both the walking and battling speeds to the maximum to help hasten things up accordingly. There are a number of convenient changes you can implement so you can play how you like, showing that the developer fully understands the game can be repetitive, so accommodate you as best they can.

There are actually a few nice options available. You can implement a cool CRT shader over visuals, fonts can be changed between pixelated and dyslexia-friendly, the colour of the hero can be changed and how often they’re highlighted, as well as how often the game automatically pauses. In a game happy to revel in minutia, it’s great to see the developer afford you many options to cater to individual tastes.

Beyond sheer mechanics, the gorgeous pixel art and stunning chiptune soundtrack do a lot of the heavy lifting when it comes to building atmosphere. While everything is presented fairly simply on the map, every element is still gorgeously detailed where it needs to be, in the card art, the battling animations, and the occasional dialogue boxes with character sprites. I became fully engrossed in the brutal world just begging to be explored further, and the beautiful pixelated illustrations and moody, dazzling soundtrack kept me there. 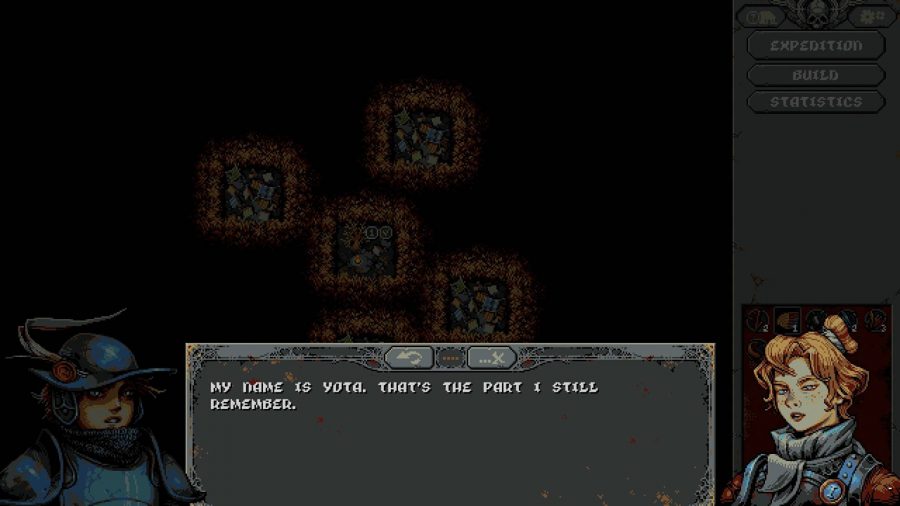 Another thing to mention is the fantastic implementation of controls. Using a standard controller feels fairly fluid, with options for selecting equipment and cards feeling fairly natural. You control a cursor with the analogue stick when placing tiles, but often you’ll also have to press a lot of buttons to flit between options. There doesn’t seem to be an elegant solution to most of these issues, other than using the Switch touch screen. I have a stylus leftover from Brain Training, and using that on my Switch for Loop Hero just like building in Super Mario Maker felt absolutely incredible. It opens the game up a lot, though it doesn’t feel much like Four Quarters optimised the icons for Switch, as much as the PC version has simply had touch screen options implemented over it. In fact, at one point a dialogue box popped up clearly mentioning right-clicking a menu option, instead of being mapped to the Switch controls.

I’d like to see things like larger and more UI friendly options in the future, as while this is definitely my preferred control method, it still feels difficult at times to select the tiny icons and move things properly. I can only imagine what playing on a Switch Lite feels like. Meanwhile, another strange issue seemed to be when switching between regular controller methods and touch screen support. I got soft locked out of the game twice when moving between these methods, though luckily there’s a very regular autosave meaning I only lost seconds of gameplay. 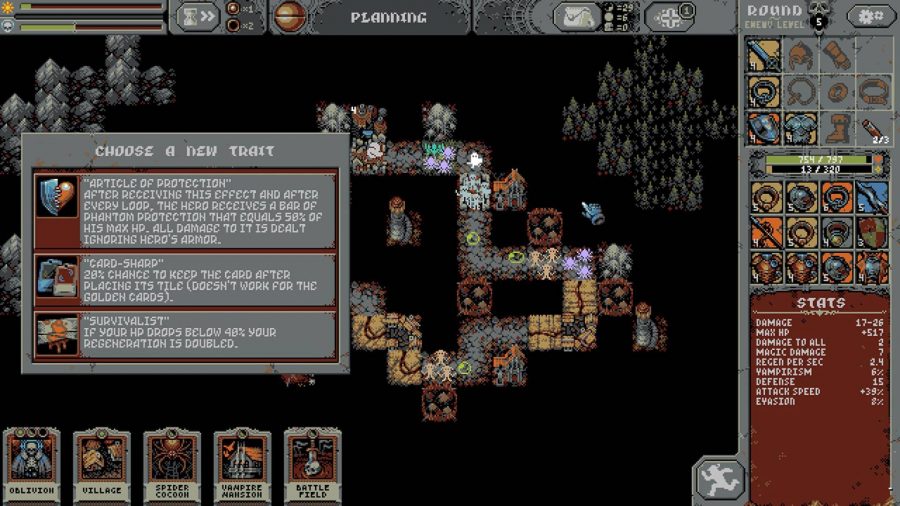 Loop Hero has so many layers to it that it’s almost overwhelming, I’ve played for nearly 20 hours and I feel like I’m still just scratching the surface. What I do know though, is that I can’t wait to dive back in and unlock even more options for my next loop. I’d like to see adjustments made to the UI and minor bugs patched out, and I do really wish I felt better rewarded for hours of grinding at times, but these are minor quibbles compared to the success of the actual game. This intricate, engaging, and astonishingly deep RPG is given a natural home on Nintendo Switch, and I can’t wait to dive back into this brutal world for even more punishment.

Possibly one of the most addictive games I’ve ever played, Loop Hero feels great to play and to master, and presents its grim, gloomy world with enough personality to keep you coming back for more. The huge depth and repetition could be overwhelming for some, and I hope minor issues are addressed, but none get dramatically in the way of my enjoyment